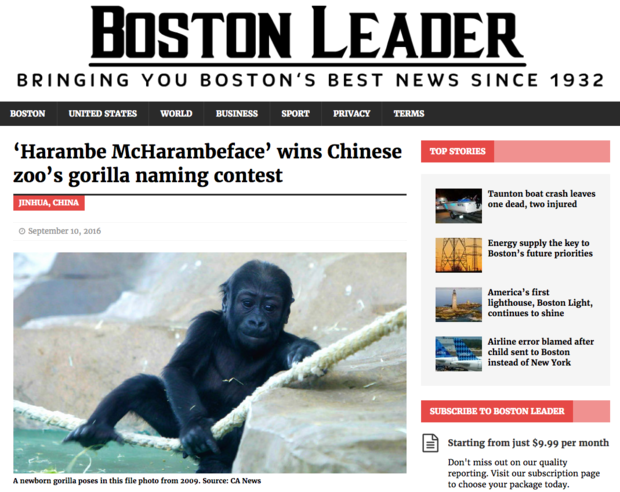 Image: A fake news story from The Boston Leader.

The question of what to do about fake news and misinformation is one that troubles editors across the world. It is why First Draft News launched a partner network, this week, to connect newsrooms and social media networks to tackle issues of trust and truth in journalism.

First Draft News is the product of a coalition committed to improving the standards of digital reporting with a focus on verifying eyewitness media and debunking fake stories.

Its partner initiative joins the platforms – including Twitter and Facebook – with newsrooms around the world. Through this collaboration, it hopes to find solutions relating to verification processes, eyewitness media, news literacy in the social media sphere, and trust in the media. The World Editors Forum has signed up to the network and newsrooms are being encouraged to do so too.

Fake stories have the power to generate a lot of attention
Fake news sites and social media accounts make it harder to discern what is really at stake in the world, especially because many take on the guise of a traditional digital media site. Yet, they can be very successful.

Alastair Reid, Managing Editor of First Draft News, told the World Editors Forum that fake news stories can be extremely influential, since many people get their news from social media. If it appears on a timeline next to a story from the Washington Post for instance, people might not see the difference, he said.

Craig Silverman, editor of BuzzFeed Canada, analyzed two studies on the matter that concluded it takes more than 12 hours for a false claim to be debunked online.

A fake news story from Huzlers.comIn 2015, Silverman published a report for the Tow Center for Digital Journalism called “Lies, Damn Lies, and Viral Content: How News Websites Spread (and Debunk) Online Rumors, Unverified Claims, and Misinformation“, wherein he tracked 10 articles that debunked a hoax in 2014 about an artist in the UK. Ultimately, the total combined shares for the 10 debunking articles reached 60,953, the hoax reached 60,402 alone.

He cites another example from 2014, when Huzlers.com published a fake story claiming that the earth would be completely dark for six days straight. It generated over 840,000 shares and social interactions, while the combined shares from seven debunking articles earned only about 127,000 shares across those same platforms.

“Hoaxes are increasingly engineered to spread, and can therefore be very effective,” Silverman wrote in the report.

Last Tuesday, a fake news story gained traction about a Chinese zoo renaming one of its gorillas “Harambe McHarambeface,” as the result of a naming poll. Allthough the story sparked a social media buzz, there was no such poll, nor a baby gorilla.

BuzzFeed and the Huffington Post UK debunked the fake news story by pointing out that The Boston Leader, which published the story, is not a credible source. It has no social media accounts and many of its landing pages lead to service errors. BuzzFeed also reported that the website’s tagline boasts that it’s “Bringing You Boston’s Best News Since 1932,” yet its domain was registered less than a week ago.

Take The Guard1an for instance; the average person scrolling through a news feed might be fooled by a grabby, seemingly true, headline such as this one from August: “Usain Bolt Donates all his $20 Million Olympic Earnings to his Former School”. Some might take it as truth because the site name mirrors that of the real publication, The Guardian, and share it with his or her followers, thereby perpetuating the lie.

Many fake news sites don’t issue a disclaimer about their nature. but The Guard1an casts itself a as a “parody” and “satire” publication specializing in fake news. “All items or stories on this website are fictitious,” the site reads.

But satire and parody by definition do not stem from falsehoods, rather, they draw upon real-life happenings to make a larger political point in a humorous way. The problem doesn’t concern The Onion, the Borowitz Report at the New Yorker, or other publications that explicitly mark their intent to satirize current events.

Once a lie is out there, it becomes very hard to defeat it. But that doesn’t mean editors shouldn’t promote the effort. BuzzFeed Canada and First Draft News both feature fake news quizzes that allow readers to have a go at discerning whether a headline or viral photo was fake or real.

“Largely, when debunking a fake story, it sticks in people’s memories more than when it’s funny,” Reid told us.