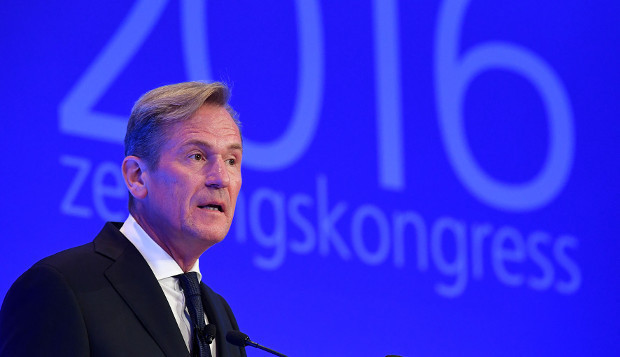 The Springer CEO and and newly elected president of the Federation of German Newspaper Publishers (BDZV) has joined the growing debate over social media platforms’ editorial responsibilities, arguing they needed to be prevented from acting like publishers rather than distribution platforms.

“It will lead to serious consequences if these quasi-monopolistic technology platforms take on editorial responsibilities – both for the business and for society,” he told an audience made up of media experts and executives at the Zeitungskongress conference hosted by BDZV in Berlin last week.

A few weeks ago, Facebook came under fire for censoring an iconic Vietnam War photo after CEO Mark Zuckerberg was called out by the editor of Norway’s largest newspaper in an open letter. In his speech, Döpfner also made reference to several other instances of censorship on Facebook:

“These cases show how important it is that Facebook or Snapchat or Pinterest don’t act like or are viewed as a medium, a digital mega-publisher, a source responsible for the content published,” Döpfner said.

“They should act and be viewed as that what they are and, as they say themselves, want to be and always should be: a technology-driven communications platform.”

While Zuckerberg has indeed insisted in the past that Facebook is not a media company, it has tremendous control over much of the world’s media. The company demonstrated that power again at the end of September when the pages of two Palestinian news organisations as well as the personal accounts of seven editors and executives were suspended. Facebook later apologised in a statement, calling the suspension a mistake.

But it’s not just these cases of seemingly unprovoked censorship that concern Döpfner. He said that debates about hate speech on the platform or the company’s editorial responsibility – however well-intended – were misguided. Taking care of all of these issues was something that went beyond what a platform of this nature is supposed to do.

Selecting news and topics as well as taking responsibility for the content that has been produced is the job of publishers not a digital distribution platform, Döpfer argued.

“By giving Facebook this role – or, as has happened in the past, actively demanding they take it on – we are digging publishers’ graves,” he said.

“Facebook and co should be viewed and regulated like telecom companies. They’re not held accountable for the stupid or dangerous stuff people say over the phone.”

A move to protect the press

Regarding hate speech in particular, he drew a comparison between Facebook and traditional newspaper distributors. While they need to act when faced with obvious and easily identifiable legal violations – for example, as Döpfner explained, refusing to distribute a magazine with a Swastika printed on its front page and clearly calling for the persecution of Jewish people – checking each and every sentence of a newspaper does not fall within the realm of their responsibility.

“A distributor does not perform final editing,” he said. “Neither should Facebook.”

When it comes to hate speech, he said, action needs to be taken against the author and not against the distribution platform.

While this suggestion may come across like a move primarily benefitting social media platforms, he argued it’s aimed at helping the press.

“By asking for this, we’re not protecting the digital platform. We are protecting ourselves – the press,” he said. “Those who ask Facebook to take responsibility for each line turn it – against the company’s will for that matter – into a media company. And, ultimately, into a global mega-publisher.”

Still, according to Döpfner, distributed content is the way forward, and creating an eco-system in which publishers can have financial success despite the power of social media platforms is one of BDZV’s top priorities.

Döpfner’s entire speech, in German, can be found here.