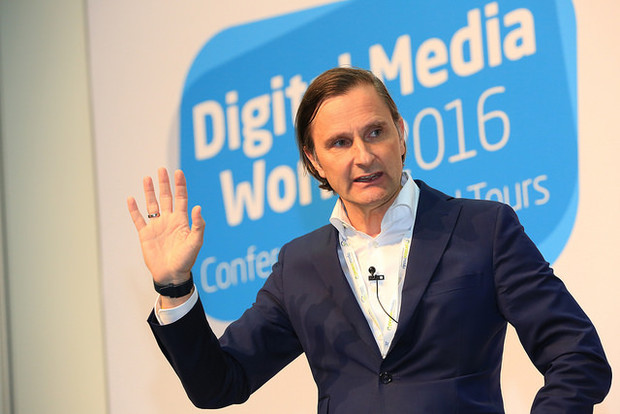 Klaus Schweighofer, Board Member of Styria Media Group (above): “Our world is digital as well as analog and that’s how we address the business.”

“You have to show people you are more than a newspaper with different areas that you are strong in,” said Kurt Sabathil, Managing Director, Schwäbisch Media, Ravensburg, Germany. “You have to show that in your region, no one will be better than you are.”

Sabathil was describing his company’s transformation over the past several years, through which they have achieved a number of positive results, such as having both circulation and print advertising declines for several years that are only about half the rate of the German national averages for news publishers. For example, Sabathil said, in terms of advertising, “this has equated to a difference of 5 million euros that we can invest in other activities.”

He credited his company’s continued investment in content for helping to slow the declines seen by others. Rather than lay off journalists, Schwäbisch Media has actually added 50 during the past several years, he said. Many of these staff are younger people, and more than a quarter of the company’s employees are now younger than 30, and fully half of the company is younger than 40.

“Young people have a very different view of things than we do,” Sabathil said. “They look different, and they think different. I think it’s important to have diversity in your company.”

Furthermore, he said Schwäbisch Media has invested heavily in its infrastructure. First, in 2009 they invested in new printing equipment, a move that saw them replace seven old machines with four new ones, which also reduced some personnel, though production levels have been maintained. Second, the company moved into new headquarters in 2012 and this has led to advantages such as improved internal communication through a completely open plan.

In addition, the company is trying to grow its revenues through new businesses such as events, including a conference for digital professionals in Ravensburg that draws 350 participants. Other revenue streams come through their transformed cross media areas dealing with employment and real estate.

“We started quite a lot of different things, and we don’t know if they’ll work out or not,” Sabathil said. “If you don’t try new things, you don’t have a chance of new growth.”

“We are not just print. We are of course print and digital. And this is important to us. It’s not either or. It’s both,” said Klaus Schweighofer, Board Member of Styria Media Group (pictured). “Our world is digital as well as analog and that’s how we address the business.”

Styria Media Group, which operates in Austria, Croatia and Slovenia, is following this approach by exploring new digital areas while staying true to its legacy business rooted in print.

“We keep on pushing print, especially in Austria,” said Schweighofer. “Print is a strong, strong pillar to support the whole business and to support the journalistic teams.”

With a combined reach of 70% for daily newspapers, he cited Austria as one of the strongest markets in Europe and the Americas. Recently, the daily reach of its own paper, Kleine Zeitung, has been expanded to 52% in the southern part of Austria, and Die Presse newspaper has also been developing well in recent years, according to Schweighofer.

At the same time, Styria is also exploring pillars in the digital area. Jointly with Norway’s Schibsted Media Group, Styria developed Austria’s leading classified portal, willhaben.at. Additionally, the media company has launched wogibtswas.at, a portal displaying special offers and flyers from retailers in a mobile app and on a website. Given that around 30% of all of Styria’s ad revenues are coming from the retail sector, developing a new solution for advertisers seemed like a necessary move, according to Schweighofer.

“We thought that display advertising would not be a nice offer for them in the future,” he said. The portal is already generating more revenue than Styria’s news portals, and its launch in Croatia and Slovenia as well as an international roll-out are being prepared at the moment.

Despite these other ventures, Schweighofer says the company’s main aim has not changed. Around 1,500 people of Styria’s 2,500 strong workforce are in charge of products. Out of those, around 60% are journalists. “The news and journalism is still the very core of Styria Media Group, and it will stay its heart,” Schweighofer said.

Styria is also boosting its efforts to finance the high costs from its news portals. This year in November, a paid content system will be introduced for Kleine Zeitung and in January next year for Die Presse.

“We consider ourselves a digital company although we do have a tremendous amount of print revenue still coming in. We try to innovate on both of those sides,” said Gerold Riedmann, Managing Director of Russmedia and Editor-in-Chief of Voralberger Nachrichten.

For Russmedia, the key to operating its portfolio of digital and print products successfully lies in separation. “We do not believe in integrated newsrooms. We do believe in separation. When was the last time something you did on a sideline was a success?,” Riedmann said.

“The most dangerous thing that can happen to you when you have an integrated newsroom is your pure digital competitor because it will be experimenting earlier than you are.”

Russmedia has drawn clear lines between its different products, including, among others, newspapers, online portals, a radio station, and classifieds.

“Why are we all going for a one-brand strategy and integrating everything in one bet, in news, in print, in digital,” Riedmann said. “Creating new brands is not too much of a risk. So why not start new brands?”

According to Riedmann, around 95% of the region of Voralberg have daily contact with the company’s brands. Its most successful products are the news portal vol.at with millennials making up 65% of the audience and the newspaper VN. According to Riedmann, the epaper of VN is proving to be particularly popular, at least for now.

“We know within five years time we might not care about editions, but for the time being it’s the only thing that we can sell in digital, and we sell it the most in Austria,” he said, adding that nearly 10% of readers consume each daily issue on an iPad on the fully responsive website. Pages of the epaper can be shared on social media, retaining their print-like appearance.

“I don’t know if it’s the answer for the future, but for the time being it’s very well accepted and we like it a lot,” Riedmann said.

By Brian Veseling and Simone Flueckiger