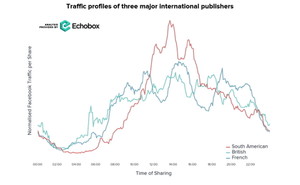 Of course part of the reason for reading those posts is because you want to know how to use social media more effectively. The chances are that you read the articles so you can go away and not have to think about it any more.

The real appeal of all that “best time to Facebook” wisdom is that it means you’ve got the Facebook problem handled. Three times a day at the prescribed hour. Like medication. Handled. Now let’s move on.

Except that a closer look suggests it might not be quite that simple.

Echobox, a company using artificial intelligence to better understand audiences and help publishers optimise their social media efforts, took examples of major newspapers from across the world, including France and the UK. They analysed the average traffic that articles received from Facebook three hours after they were shared. (To allow for the fact that some news stories “go viral”, they used the median for all stories, since the mean can more easily be skewed by exceptions.) They then based those daily averages on a full-year’s worth of data and compared the news publishers across the countries.

The first thing that became clear was that the shape of the traffic profiles for the publishers are very different. One South American publisher achieves best performance when sharing between 11 a.m. and 4 p.m., and poor performance at other times. The British and French publishers achieve more consistent results throughout the day, but both experience peaks in share traffic at different times. (See chart below)

OK, so different nationalities have different audience behaviour. Not really a surprise you could say, so the next step was to look at whether there is such a thing as consistent national behavior, comparing traffic data from the French news publisher with another leading French sports publisher of similar size. Echobox found that up until 10 a.m. they achieve similar results, but after that the curves diverge markedly. By early afternoon, the news publisher is enjoying a strong peak in traffic per share whilst the sports publisher is in a pronounced trough:

Overall the sports publisher’s traffic is more regular, with fewer dramatic peaks and troughs, while the news publisher has clearly demarcated periods when more readers are clicking through to their stories.

Meaning that even for two publications of equivalent size working in the same country, there are stark differences in audience behaviour.

Fair enough, but that could be the problem of comparing “apples with pears” – sports readership and general news readership could reasonably be expected to have different patterns. So then Echobox looked at the traffic of two leading French news publishers with similar content.

Even between these two publishers, it turns out there are crucial differences in activity. They both experience a similar pattern of peaks and troughs, but the relative highs and lows occur at different times during the day. For example, when one publisher experiences a peak in share performance at 11 a.m., it is actually one of the worst times for the other publisher to be sharing:

Interestingly, when two very similar publications in the same country are compared, their audiences seem to consume content in different ways at different times. Simply put: they don’t have the same appetites.

So, sad to say, you don’t have that Facebook issue sorted by presuming your audience patterns fit some kind of general trend, even if that trend is modelled on a close rival.

It’s clear there is no universal “right time” to post to Facebook. There is only the right time for your audience and your content, and pinpointing that means analysing a large amount of your own historic and real-time data. The good news is that you can now solve the complex new science of social media distribution, and save yourself a whole load of headaches, by using an AI service favoured by major publishers.