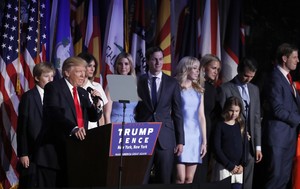 President-elect Donald Trump gives his acceptance speech as he is surrounded by his family during his election night rally, Wednesday, Nov. 9, 2016, in New York. (AP Photo/Mary Altaffer) ORG XMIT: NYDT154

In short, the press underestimated Trump’s chances to win across the board, all the way to the election day. Now, the news media is asking some tough questions on how they could have “missed the story”, in the words of Margaret Sullivan.

While media commentators are only starting to tackle that question, it seems clear that at least some answers will arise from looking at polling-based predictions, and social media’s role in the political debate. We’ve collected some crucial discussion points that have so far risen.

Polls, on the whole, were clearly on Clinton’s side. To pick one prominent example, FiveThirtyEight’s polls-based forecast before the election estimated that Clinton is a 71–72 percent favourite to win the election. In the era of “big data”, the fact that polls failed so considerably is likely to provoke questions about how strongly the media can place their trust on data from now on.

According to Politico, “hidden Trump voters”, who didn’t admit to supporting Trump to pollsters, could be a significant factor in explaining the difference between polls and the election result. Mona Chalabi, data journalist at the Guardian, draws parallels with the Brexit polls, where analysts knew that the figures were inaccurate, but nevertheless used them in their predictions. In a video titled “Political polls are bad for democracy” she also argues that predictions months before the election can have an impact on how people eventually vote, rather than describing people’s expected behaviour.

However, for news media perhaps the most damning assessment comes from those Trump supporters who argue that media and analysts explained away Trump’s chances, even when polls predicted a close result, because they just couldn’t see Trump ultimately being elected. Or, as Curt Anderson, an advisor to a pro-Trump super PAC, said to Politico about the press: “they are in a bubble, and that bubble has just been burst.”

Many will also see the result as validating Trump’s claims that polls release “phony numbers”. The credibility of pollsters has therefore suffered a major blow. This could even extend to undermining the whole concept of data-based reporting. In the coming days, there will certainly be a slew of analyses that examine how the polls failed so greatly, and commentary on how the news media should report on them.

Many are also asking if the press is so anti-Trump that the bias explains shortcomings in their reporting. As the New York Times said: “Journalists didn’t question the polling data when it confirmed their gut feeling that Mr. Trump could never in a million years pull it off.”

The Times goes on to argue that political journalism has failed to capture “the anti-establishment mood that is turning the world upside down”. For movements drawing from this mood, Trump and his promises to change the status quo were more important than all the fact-checking, reporting and investigations into Trump’s past that went on in the mainstream press. In fact, while they see the US government and the economic system failing, similarly also the news media is broken for them.

In addition, a lot of blame has been put on “filter bubbles”, which divide people online into different arenas that don’t talk to each other – or aren’t even exposed to the opinions of the “other side”. Only yesterday the topic was discussed at Web Summit (see our report here), where, it was seen as a real issue for democracy. Now, commentators are calling filter bubbles a major reason why the media was so wrong about the election’s result.

On the topic of social media, Ars Technica also reported on “social bots”, which automatically produce content on specific political agendas but whose controllers are “nearly impossible to identify”. At least 15 percent of users discussing election-related topics are estimated to be social bots. Some retweet content, others jump into existing conversations, contributing to the political discussion online even if their precise effect is difficult to determine.

A lot has been said about the opportunity that social media offers to candidates to reach out directly to their potential supporters. Earlier this month ezyinsights examined both Clinton’s and Trump’s campaigns’ use of Facebook and particularly video. The Tump campaign “is behaving like a media entity rather than a politician’s fan page,” the article concludes. “If the 2016 Presidential election were to be decided on Facebook popularity, it would be a landslide victory for Trump.”

Another example of Facebook’s power was highlighted by The Atlantic, which reports that when Facebook encourages people to vote, and especially when its users see that their friends are voting, they are more likely to vote as well. Keeping also in mind how the platform is also used to disseminate fake news, the article’s conclusion is that “Facebook is—without a doubt—the most powerful company on the global media landscape”.

Trump’s campaign was remarkable in many ways, but one element that stands out was the anti-media sentiment that it nourished. Brian Stelter argued on CNN that Trump used the news media, “while at the same time running a vicious anti-media crusade” from day one. The mistrust of media has reached all-time low in the US, and Trump succeeded in taking advantage of this. For the future the question will be, to what extent this hostile attitude towards the media will persist during the presidency.

These questions are likely to be just the tip of the iceberg, once the shell-shocked media recovers from the elections and starts examining its coverage. In the meantime, Poynter’s call “Journalists, it’s time to get back to work” can provide some strength for those stunned by the result.