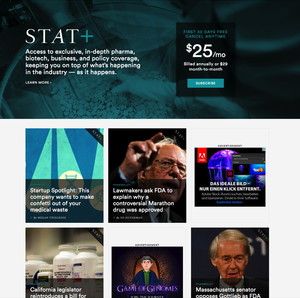 Initial response has been good, say Executive Editor Rick Berke and Chief Revenue Officer Angus Macaulay, whom we interviewed earlier this month. They declined to give subscriber figures, but Berke said, “We’ve been happy about the response we’ve gotten.” Crucially, overall site traffic has not faltered but instead grown to a new high (see below for details).

For US$ 29 per month (discounts are offered), STAT Plus subscribers get access to what Macaulay says is “our biotech, our pharmaceuticals-industry, and some of our [governmental] policy coverage” – information of interest primarily to people in directly related professions, as opposed to the general public.

The content consists of “exclusive one-on-one interviews with industry pioneers, inside intelligence from Capitol Hill [state government], a first look at cutting edge laboratories and early-stage research, and data visualizations on key industry trends,” according to the web site.

Said Macaulay, “High-quality journalism and original content is obviously the foundation of what we developed with STAT Plus… and around that, other benefits that can drive engagement and build a sense of community.”

Rick BerkeDeciding which pieces of content go behind the paywall and which remain free of charge is a subject of daily discussion and experimentation, said Berke. “We don’t have a set number [of articles], but we like to have at least a half dozen added-value pieces a day for STAT Plus, sometimes more,” he said. A mainstay is material written by a long-established reporter on the pharmaceuticals industry “who’s developed an audience over the years,” he said. “We found before we started STAT Plus that he had the most loyal readers of anyone. They kept coming back to his content. His take is a sort of an insider view of [the industry]. So his work is a natural for that.”

The events component of the business plan is for the most part still in the planning stage, but in January a panel discussion about the the drug approval process was held for STAT Plus subscribers. The event grew out of a report about that process that STAT staffers wrote in collaboration with the QuintilesIMS Institute. “We’re trying to take advantage of topical subjects that we’re covering on the site and bring them to life in forums,” said Macaulay.

Staffers are experimenting with various forms of direct contact between subscribers and reporters. For instance, some topic-centered discussions take place on a specially-created Slack channel, which “have proven to be very interesting,” Macaulay said. Another format is a conference call, in which a reporter describes to subscribers what he/she has just observed at a major event, before sitting down to write a story. “All these are extensions of the high-quality, exclusive reporting we do. These are all mechanisms for [subscribers] to engage more closely with us and we with them,” he said.

Regardless how many subscriber benefits are offered, erecting a paywall obviously involves an element of risk. The people at STAT aimed to reduce the risk by conducting extensive research in advance. That research took two forms: a visitor survey, and wide fact-finding about other publishers’ paid-content strategies and tactics.

The survey, addressed to site visitors and newsletter subscribers, was intended to find out as much as possible about readers and what areas of the site they valued. Crucially, it asked whether their interest in STAT was personal or professional in nature. “And then we had questions that were dedicated to their willingness to pay for content, some price ranges, and the types of content that they would want to see, and some of the elements of the content,” said Macaulay.

Angus MacaulayIn parallel, “We also did a lot of looking at what other media brands were doing, because obviously there’s a lot of experimentation going on right now. We have premium content and paywalls in all shapes and sizes, and so we looked at everything from the Wall Street Journal and The New York Times, obviously internally at The Globe, but also vertical brands like The Information, Politico, and some other health sites like GenomeWeb. What are people offering in terms of reader benefits? Who are they trying to target – is it a general consumer or more of a B-to-B audience? What kind of price points are they putting out there? We wanted to really see what things we could take from others who were out there experimenting as well.”

Ultimately, the aim of erecting the paywall is to reduce STAT’s dependence on conventional advertising and sponsored content, said Berke. “We’re determined to find other revenue streams. And so this is why we carved this out as sort of our first test case of building a premium product. And so far we’re making great progress, and we’ve been happy about the response we’ve gotten.

“People are willing to pay for the added-value journalism, and the most surprising thing… is that there’s been a lot of interest from big companies and government institutions and other places that want group licenses, which we weren’t anticipating – but it’s a nice problem to have, to scramble to try to sign up bigger groups than we expected,” Berke said.

Macaulay adds that group subscriptions had been planned when the STAT Plus strategy was drafted in late summer last year. “We had it in there as, ‘This will be an expected area that we’ll evolve to.’ But within the first 30 days, we had nearly 70 companies or organizations reach out proactively, saying, ‘How do I get group subscriptions?’ and most of those happened within the first two to three weeks… It was a lot of large academic institutions, it was pharmaceutical companies, it was venture capitalists, law firms, consulting firms, and so forth.”

On the individual subscription level, “What’s been interesting to see is, we are getting subscribers primarily from people who are coming to the site and seeing the content and wanting to access the content we have. Our subscription marketing manager literally just started this week, so we haven’t even started proactively marketing the content – and we are projected to reach our goal for our first year,” Macaulay said.

So if subscription numbers are on track, what about traffic? Macaulay acknowledged, “There was a concern that if we put a chunk of our content that accounts for anywhere from 10 to 15 percent of our pageviews in a given day or week behind a paywall, do we risk having our traffic slow down?”

Fortunately, he said, “What we see is the opposite – our overall traffic growth continues, to the point that January was actually our biggest month ever.” The number of total unique visitors that month was 1,762,059.

That is a respectable statistic for a barely one-year-old niche site, of course – but Macaulay cited another figure that renders it pale by comparison: 75 million video views in just five days’ time! The clip, posted in early March on Facebook, highlights a successful trial treatment for burn patients in Brazil that involves placing fish skin on the wound area. He said, “Before that, our biggest video got about a million views, which was huge for us… But also to give you an idea, in one week we went from 90,000 Facebook followers to 235,000. That was driven by that video going viral in a huge way. For us that’s great – it’s a great way to expand the reach of the brand, to introduce it to people who maybe wouldn’t have otherwise known about it.”

Another highlight is a new website design that includes dramatically better home-page organization. It also caters more effectively to a variety of readers and promotes more different types of content. Berke said the first design was executed quickly in the rush to launch the site in late 2015: “We moved really fast. Several of the design agencies said, ‘We can’t get it done by November.’ And one of our requirements was we didn’t want to waste any time. We were impatient and anxious to get moving.” Since things have settled somewhat, Berke said, “We hired an in-house head of product, and hired an in-house designer who could think about what made sense for STAT.”

The number of e-mail newsletters has grown notably – from two at launch, to nine as of last June, to 14 currently with two more planned, according to the site. A recently launched job board will generate some revenue, said Macaulay. A series of events late last year “generated six figures in revenue for us, and were a great success for both attendees and sponsors. And people are either asking us about events or want proposals for us to do stuff with them in the second half of the year,” he said.

Advertising, the main revenue source, continues to grow strongly, he said. “What’s been encouraging to see is that we had a very good first year, with nearly 60 advertising partners. And this year is off to a phenomenal start. Our first quarter is up 125 percent vs. last year, and we still have another month to go. So we’re trending well ahead of last year, and our full-year bookings are just as robust,” he said.

“We’re having continued success with native advertising. Last year it was about 90 percent of our business. We’ve really embraced that from day one because it’s a trend where advertisers have been going across the board, and we took advantage of the fact that we were starting with a clean slate to put our focus on that,” Macaulay said.

The drive to license STAT content to other publishers also continues. The latest partner is Bloomberg Media Distribution, which took the initiative. “They selected us as they expand their business of offering other brands beyond Bloomberg in their mix of content,” said Macaulay. “It won’t be business-plan-altering revenue, but it’s a nice stream of future revenue, and it’s a way of increasing our reach,” he said.

Read a wide-ranging interview with top STAT managers in the WAN-IFRA Report “Alternative Revenue Streams for Publishers,” available free of charge to WAN-IFRA members and for sale to non-members.