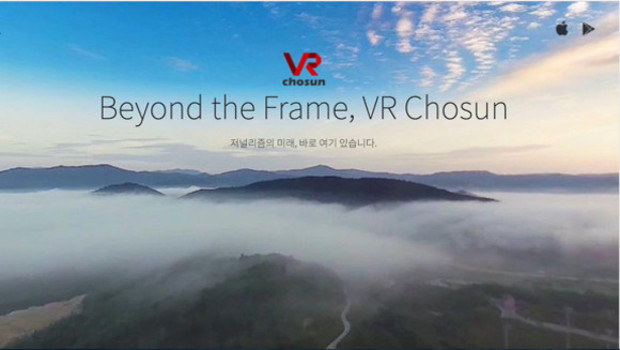 For distribution, Shin said, “We made the decision to develop our own mobile apps. In the long run, we are going to build VR business models. It took us 40 days to finish developing the apps for Android and iOS.”

By February 2016, the team was making some first efforts and learning through trial-and-error what worked and, just as importantly, what didn’t and why.

For example, a night tour of the Royal Palace in Seoul failed because it was too dark in low light, and so the scene was too dark to recognize. A story about a collapse at a subway construction site failed because there was no close-up and clear video. And an attempt to record a famous comedian’s performance failed because of poor quality audio and video.

One of their first successful stories, Lotte World Tower, took a month to complete. However, the team has since gotten much faster working with VR, and has produced 123 VR stories in just over a year. Their efforts are gaining attention and awards: the VR Chosun app was named “Most Innovative” at the Google Play Awards in December 2016 in Korea.

Shin said that raising public awareness of what they are doing through various forms of public relations has been an important component of their VR journalism. For example, they distributed cardboard VR viewers for free.

“It costs us US $1.50 for each one. We gave 10,000 cardboard viewers to people for free in places where many people gather, such as a theater, an exhibition hall, and the street across from Seoul City Hall,” Shin said.

They also distributed them to people who downloaded the VR Chosun app, which he said helped to increase the app’s number of downloads.

In addition, they held a VR events competition in partnership with a major electronics company with a total prize money of 40 million SK won (US$ 35,000).

“This competition was the biggest of its kind in Korea,” Shin said. “The prize money for first place was 20 million won (US$17,500). At that time, VR was not popular in Korea, so we felt it would be a success if we received about 50 VR films. However, 106 films were submitted, more than double what we expected.”

They also kept turning out interesting stories. For example, they reported on the 2016 Rio Olympic Games in VR.

“We deployed a photo journalist to the games who could also operate a VR camera – he sent video and stills from a Samsung 360-degree video camera every day and our VR editor uploaded them. We released 29 VR stories from the games.”

“As a content provider, we are seeking to generate revenue in two ways: We provide content to TV networks, which means we work just like a VR film production company,” he said.

“We are also producing VR films for the government and other organizations. For example, the representative order of traditional Korean Buddhism asked us to produce VR stories for them.”

At the moment, Shin said Chosun Ilbo is about the only media house carrying out a variety of experiments with VR journalism in Korea, and he believes more media companies will need to get involved in order to make VR journalism truly popular with the public, which will in turn make it easier to monetize.

“I recommend starting a VR project instead of worrying about it.” – Hyo-Seop Shin

“It’s not hard to make a VR story. The only thing you need are one or two VR cameras, like the Samsung Gear 360, which costs only US $400. The editing is similar to traditional video editing methods.”

Looking ahead, Shin said they are planning to do more combining VR technology with drones. “We have plans to produce more VR stories using a drone. For example, we are creating a ‘Four Seasons in Korea’ series with a VR camera attached to a drone,” he said.