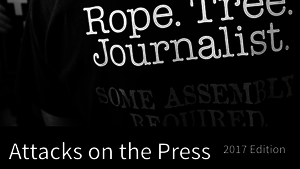 The Committee to Protect Journalists’ (CPJs’) “Attacks on the Press” report, released Tuesday, is an invaluable guide to document how zones of silence seem to be expanding around the world with the help of powerful actors (politicians, government officials, security forces, criminal groups, terrorists, hackers, private companies, etc.) who are bothered by the checks that an independent press puts in their attempts to grab even more power. And the toolbox at their disposal is plentiful, as the CPJ points out: physical attacks, including murder; legal persecution, including incarceration; psychological intimidation, digital penetration, technological restrictions, manipulation, economic pressure.

“New information technologies were supposed to make censorship obsolete. Instead, they have just made it more complicated.” – Joel Simon, CPJ

It seems that every year when journalists and international organisations get together to mark World Press Freedom Day, the meetings recap one more year of increasing attacks against the press. And this year there are more reasons for pessimism, as 2016 marked a turning point because a country long considered a model of press freedom and guarantees for the safety of journalists elected a president who promptly declared journalists an “enemy of the people”. It seems odd that after years when the CPJ’s reports featured descriptions of authoritarian regimes harassing or silencing journalists, this year’s edition now includes a chapter on Donald Trump.

But even if every year the situation seems worse than the year before, there is also hope in the growing number of journalists who are taking up the defence of press freedom. By forming networks and arming themselves with new tools in publishing, broadcasting and social media, journalists around the world are rescuing spaces from censorship, pushing back against the powerful, shaming their attempts to silence information. It has been a painful battle but in the words of Christian Amanpour’s essay in this report, journalists are going out and making some trouble, fighting to remain relevant and useful.