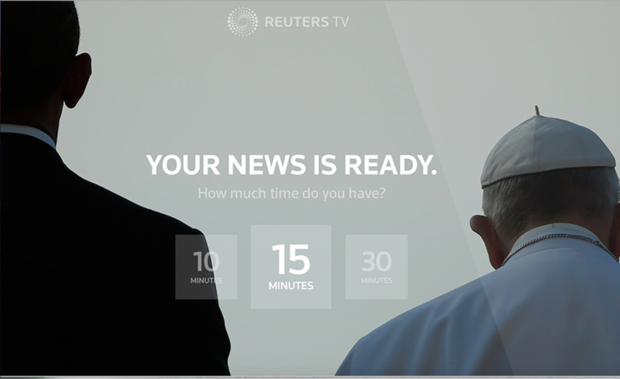 Two years after its launch (initially as a mobile app), the video news channel has succeeded in catching users precious attention time. On average, people watch for 13 minutes each session on mobile devices, and up to 20 minutes on set-top-boxes such as Apple TV.

In this interview Showman talks about why the company launched Reuters TV, how it has evolved and how its business model has changed.

WAN-IFRA: In February 2015, Reuters TV, a mobile TV news app available for about US$2 a month, launched on iOS (and iOS only at the time). What remains of the initial ‘product concept’ and what did you adapt over time, as the current version is often called Reuters TV 2.0

Isaac Showman: We launched Reuters TV as our response to the way in which video consumption, and indeed video news consumption, has evolved.

2. Online video consumption was becoming bifurcated between clips of video that are watched for seconds on Facebook, and long form entertainment that is binged (for hours) on Netflix.

Within this context, we saw an opportunity to create a new, third type of consumption, which prioritised utility, so that users could form habits around it.

We think about this generically as ‘mid-from video,’ which is essentially a 10-20 minute daily engagement.

For Reuters TV, this requires us to shoot hundreds of news videos each day, in multiple edit lengths, from which we algorithmically create a custom news program for each user that is always up to-date, always on demand, and customized to their interests and location.

The experience for our users is frictionless and almost magical. You just open the app and are presented with the most relevant news program for you. You can even change the program length from five to 30 minutes! — Isaac Showman, Reuters

As you mentioned, we launched on iPhone and initially charged a subscription fee for the service.

With so many free news services in the USA, we found the fee was unnecessarily limiting our growth, so we switched the product to ad-supported model. We still have a subscription option however for those who prefer an ad-free experience.

We’ve also expanded the product significantly since launch, both to different
platforms, and also by adding additional services such as our Featured programming (which offers a deep-dive into issues) and our Live feeds (which take you to the heart of news events globally).

Reuters TV on Android phoneAt the start you were very much Apple-environment only. Then you built a web app and became available on Android, Chromecast, Roku, Amazon Fire TV and Xbox. How do you select the distribution platforms and does that require a lot of additional developments for your team?

We look at where the users are! When we first built Reuters TV a lot of the underlying technology relied upon Apple frameworks, which is why we focused on their products. We’ve evolved our technical approach since then to be more universal, and we’re now on every major US platform.

Product development is always challenging, but our video technology, which is the most complex part of what we do, is now pretty well evolved so we can launch on new platforms quite quickly.

You’ve said ‘We set out to create news for the Netflix age, and our ambition has always been to rethink the way video news is presented online’ …. What does Netflix age means in your case?

It’s a reflection on the demographics and age of our users who are typically urban professionals in their 30s and 40s.

These people don’t want linear television and they don’t want to be talked down to by anchors or glossy correspondents.

They want real, visceral, global news delivered in a way that fits in with their lives.

The business model for Reuters TV has changed since the launch. Now it is a mix of paid and ad revenue. What are the requirements you’ve learned so far for both models (the conditions that can trigger success)

I was at The Economist for a long time and worked in the circulation team. Look, subscription businesses are fantastic, but they can be a slow burn and require very sharp content differentiation. That works for The Economist or other specialist publications, but I’m less convinced it works for general news.

Going the ad route isn’t easy though. You need a really sharp product to deliver a quality, engaged audience at scale. You also need a really good integration for your advertisers as the ‘standard’ stuff just doesn’t cut it anymore

Actually, my new operating theory is that publishers should prioritize tools and services as much as content. — Isaac Showman, Reuters

Done right, tools have benefits, and I think it’s easier to market those to users and, ultimately to convince people to pay for them.

At that point, you’ve disintermediated your relationship with both users and advertisers so what are you left with? I worry that you live or die based on the pick-up of each piece of content.

In 2016 you started to expand geographically and introduced a ‘publisher partnership,’ where do you stand in those two developments?

We’re now available everywhere in both a US and International edition, with the content tailored to your location.

Our focus for Reuters TV is still in the US, but we also have a very large international website and we’re updating that so that video plays a more central role. — Isaac Showman, Reuters

What do you think of Roku introducing audience guarantees for advertisers buying commercial on their OTT platform… will that help you also get more traditional TV ad budgets?

I’m not as familiar with this particular initiative, but Roku are at the forefront of the digital TV revolution, and I know they’re as invested, really even more invested, than we are, at getting advertisers to spend money on digital TV.

As mentioned above, Showman will give the morning keynote presentation on 9 June at the World News Media Congress in Durban, South Africa.