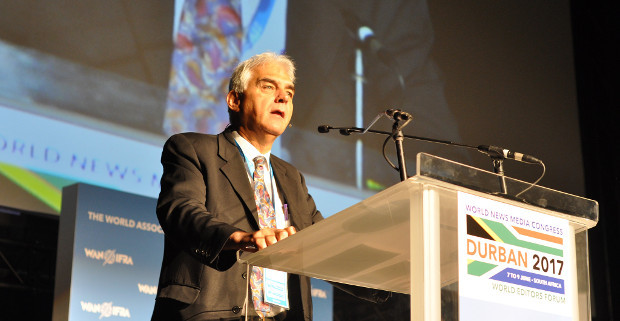 While the challenges of understanding trust in journalism today shouldn’t be generalised, two overarching global trends can be identified: (a) there is much public heat but little light in claims and counter-claims around journalism and fake news (b) in the vastly expanded information universe today, trust in newspapers is experiencing some rust.

Journalism risks losing its shine. And yet, this is a heritage that needs to be illuminated and everyone needs to see it preserved for generations to come.

Among the major problems is the torrent of disinformation coming from outside the legacy mainstream media. Often this is by malicious actors exploiting a web name that sounds as if they were a genuine news medium brand. The overall effect is that healthy public scepticism about the merits between different information flows is shifting toward cynicism about all of them altogether.

When there are multiple claims to being authentic news, it causes confusion. The expectation that society can find professional journalism and trust it is eroded.

In place of journalism as a non-fabricated and authoritative representation of reality, all “truths” come to be seen as equally plausible. Anything goes.

Which leaves us all in dangerous ignorance of the fact that reality is often something different to what we would like to believe.

This change is part of a wider societal trend, for example in the weakening of traditional political parties and their traditions, and the ascent of new – often populist – alternatives claiming a legitimacy of being anti-establishment.

A traditional political party can collapse, and a new one can take its place. But you can’t replace journalism with disinformation or entertainment.

If there’s no journalism, there is a void. Where there is a void, it gets filled with lies and rumours, titillation and trivia, hatred and human rights abuses.

With declining economics of media, the world has seen the loss of journalists to redundancies. Add in the other challenges today, and we risk a loss of journalism altogether. And without journalism standing out in the mix, it will not be possible for societies to find the public path to the sustainable development – a path that should be based upon evidence, facts and informed analysis.

To lose journalism would mean that we would find ourselves lost.

At stake in this whole trust question is nothing less than the destruction of that particularly precious world heritage called journalism.

Without journalism, who will do the stories about corruption? Debunk the liars? Tell us about the triumphs and tragedies that accord with actual events? Provide principled and empirically-founded perspectives that give nuance to our understanding?

Who will check the post-truth narrative? And stop the slide from science to superstition?

Imagine an information environment made up only of the shouts of individuals, self-serving public relations and advertising spin, governmental propaganda, and the content of trolls and terrorists. That’s not an idle thought experiment; it is a spectre.

Journalism under siege as never before

Our reality is that journalism today, as a crucial part of our modern heritage, is in a very fragile state. We can fill books about the cases where it is being battered by economics, gagged by laws designed for disproportionate application, and suffering physical assault on its practitioners.

As is obvious, journalism is now also being deliberately damaged by demagogues, who unleash inhibitions and legitimise anger that is very far from respecting the values of tolerance, non-racism, gender-equality, democracy and human rights.

Civility becomes a distant memory in the face of forces who abuse freedom of expression, especially on the Internet, to frighten others into silence. These are cyberthugs who especially pick on journalists, and give women journalists an extra dose of intimidation while they are about it.

The volume of cyber-bullying and online threats against journalists today is surely unprecedented, and especially violent in tone when it is a woman who, evidently, has dared to do journalism.

It is little surprise that in such a climate, journalists in some places are being selectively excluded from public briefings, spat on at political rallies, and beaten up when they ask tough questions.

Even if not on the scale of the numbers killed in conflict, being murdered by criminals and or decapitated by terrorists, these attacks are very serious. We can only guess at the gagging effect and the damage to the public’s right to know when a flood of cyber-abuse hits a journalist.

As if these problems were not enough, there is another factor to note.

Journalism is being jeopardised by the lure to the public of shiny new communications, including the entertainment value of fabricated news. In this context, too many media are rushing to copy techniques of click-baiting and preferencing fastness over fact-checking. Too many are discarding the profession’s key ethic of public interest.

The living heritage of journalism as a unique service to humanity is also being compromised when the media as a whole fall short of telling stories that would enable all of society to see that this is their heritage too.

Then there is the damage done by people who self-present as journalists, but who are really recyclers of public relations or hired propagandists for owners and governments.

These internal factors contribute to tarnishing trust. They weaken journalism from within, at the very time when it is under ferocious external attack.

How trust ties to truth

We have to understand the problem if we are to push back. That means interrogating what is trust, and its tricky course in current times.

If you think about it, trust is simply an issue of whether there is delivery in relation to expectations.

It is about trust in a product – journalism, and trust in the institutions that produce it – the news media. Our challenge today is not just declining trust in both of these, but active distrust being incited. It is about delivery being damaged from without – and diluted from within.

Beating back the challenges

Journalism needs to reassert its place in the formula of trust. That each person needs, and will get, truths that will help them grasp the complexity of reality.

We have an urgent imperative to protect journalism, and to rekindle and reinspire public expectations of what journalism can do for us.

There is need to signal that no other communications service can fill the gap.

This is a big part of why, incidentally, UNESCO promotes Media and Information Literacy for the public at large – it is about empowering critical appreciation of the role of journalism in public life. It is vital for our future.

As important, if not more, than ensuring protection and reinforcing public expectations, is this: journalism needs to live up to its distinctive promise, and show better that it is doing so.

One example is enhancing public accountability to professional principles through press councils. Another is the high potential to push for partnerships, especially with social media platforms in fighting for protection. A third is making use of advanced technology to help journalism serve the public better.

But, in a nutshell, all of these and much more will be needed to shield journalists and see news delivery soar.

If humanity ahead is to inherit a legacy to be trusted and cherished, the fight back for journalism has to be intensified.

This was an excerpt from Guy Berger’s speech at WAN-IFRA’s World News Media Congress. The full text can be found here