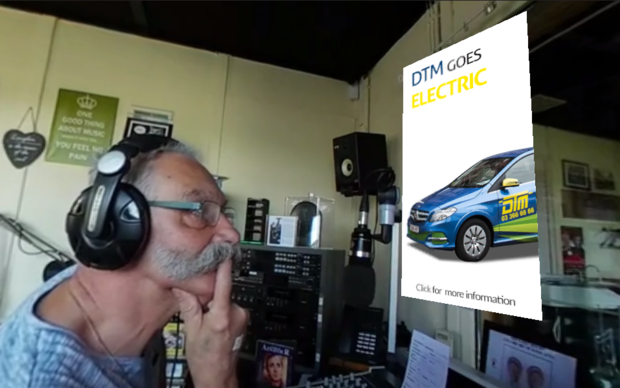 Caption for above image: An ad for a local taxi company is triggered by mouse-over/gaze control from a small logo inserted in a 360 video of a radio announcer.

While virtual reality (VR) might still be finding its place on the hype curve, 360 video content is exploding. There are thousands of 360 videos on YouTube and Facebook, and the number increases day by day.

A few large publishers have gone heavily for the format, the most well-known example being The New York Times with their Daily 360 covering breaking news around the world. Publications as diverse as USA Today, Euronews, and Germany‘s Bild have all made significant experiments.

So where does the money come from? The New York Times had money from Samsung, which also paid for the Gear 360 cameras to be distributed to bureaus around the world. Others have had money from Google Newslab or from sponsored distribution of Google Cardboard headsets.

But how else can publishers earn money from 360 video? These are some of the ways:

But is there a better way? Is there a new format possible with the medium? Can we make ad experiences inside the video that do not involve a 15- or 30-second pre-roll delay before the user sees the editorial content?

With funding from the Google Digital News Initiative (DNI), we got together with the Belgian publisher Mediahuis, parent of the daily newspaper De Standaard, and developers Exozet to find out how we could create new, easily repeatable ad experiences within 360 video.

Although there have been some minority objections, for the most part, advertising hoardings or billboards are an accepted feature of urban life.

It’s easy to envisage similar advertising in VR environments. And indeed, our first concept for this project was based on VR billboards in 360 video – hence the title. So, there are many lessons that can be learned from outdoor advertising. The closest comparison points are the billboards in video games.

One could also imagine these kinds of advertising:

So how to execute any of those concepts? For some of them, it is far easier than you might think.

The video itself is straightforward. A decent-quality Samsung Gear 360 camera costs around 250 euros. A full run-down of cameras can be found at http://tinyurl.com/360-cameras.

And what is amazing is the pace of development in 360 editing tools. The most popular video editors already have plug-ins, and a host of new web tools enable captions, photos or even clickable 2D video to be easily added to 360 video projects. Although we decided to use the pro-level 3D modelling engine Unity, at some point it will become trivial to add new elements and edit 360 video.

We showed a few initial demos to advertising and editorial staffers at Mediahuis, simply adding some non-interactive CGI billboard elements to an existing 360 brand video.

As far as future interactivity is concerned, the majority thought this should extend to opening a website – which may reflect the fact the demo was a 360 video running in 2D on YouTube. There was also some support for enlarging the ad on click or triggering a silent video.

First, we needed some video. We decided to focus our efforts on two 360 videos showing both a variety of content and different ad units.

The first was filmed behind the scenes at the successful Belgian “oldie” radio station Minerva.

The second was based on existing content from a 360 video featuring the home of well-known illustrator Eva Mouton, which was previously shown in the original De Standaard 360 app.

On the basis of our research, the first demo and the input above, we defined and built the following ad units:

Ad billboard: A simple 2D-graphic plain picture or logo placed in a suitable 3D space to blend with the existing 360 video content, e.g. against a wall or on a desktop flatscreen. This could be interactive or non-interactive.

3D object: Off-the-shelf 3D model with some branding applied, with the possibility in future for creative to be supplied by an agency, e.g. a new cereal packet. After some experimentation, we realised the simple 2D pop-up above the object was the most effective interaction.

Video: 2D video that can be played on click or “gaze control” (the act of selecting an option by centering the gaze in the VR viewer / Google Cardboard).

This is a small sample of the comments by members of the Mediahuis advertising staff:

What was your favourite ad unit in the two ­videos?

“The couch popup in the Eva Mouton video. It had the most added value and was a seamless thematic integration.”

Do you think you could sell any of these units to your advertising customers?

“Yes. It seems a logical integration, and demands almost no work from the customer, as opposed to branded content video formats, where there is lot of feedback and input required from the customer.”

In the editorial department, a senior staff member reacted as follows:

How disruptive were the ad units?

“Not so much. In fact, they were very subtle. I didn’t notice the IKEA brochure, the coffee mug, or the big DTM sign on the wall.”

What about the ethics of adding ads?

“When an ad for a furniture company, for instance, appears in a video featuring an individual person, it creates an implied association between the company and the person. Should both parties have the option of approving or disapproving that association before the video can be published? Is that feasible?”

Separately, at the beginning of this project and during our initial survey of editorial staff at Mediahuis, we asked a question about labelling: How should the viewer be informed that the video has been modified and commercial elements added?

The consensus leaned towards providing that information before the video plays, as opposed to labelling each added object in the video. But there clearly needs to be some long-term thought given to labelling.

There also are some ethical questions to consider when changing the appearance of a 360 video of a “hard-news” event. But in other situations, such as an interior design show, for example, there is clearly more leeway to blur the boundaries.

We learned a number of lessons from this project:

Nick TjaardstraNick Tjaardstra, Director of Global Advisory for WAN-IFRA, will demonstrate the results of this project at the WAN-IFRA stand at DCX Digital Content Expo in Berlin in October. Nick runs our most advanced digital revenue programmes, including eRev and our MMA e-learning, as well as managing our consulting activities. He started his career in London and has more than 10 years’ experience in innovative digital projects and collaborative working. For more information on VR and ad experiences within 360 video, contact him at nick.tjaardstra@wan-ifra.org.

This article first appeared in the September/October 2017 issue of WAN-IFRA’s World News Publishing Focus, on pages 12-13.