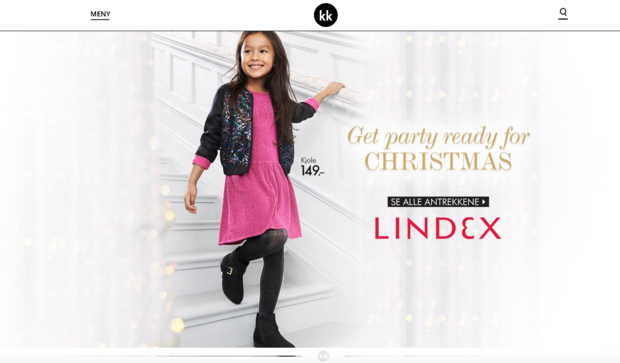 To begin with, its digital-first strategy and elegant design, which uses a generous amount of white space to great effect, have helped propel it into the Top 10 of Norway’s most popular websites.

“We launched the first beta version of KK online 13-14 years ago, but print was still our main source of income, and we had the most readers in print,” said Ingeborg Heldal, KK’s Editor-in-Chief.

“Four or five years ago, we started a whole new digital process to make the website more modern, more relevant and more digitalised because in the beginning it was very static: we just needed to put KK online so that we could be part of the future,” Heldal said. “Now, we have a digital-first strategy – we don’t save any articles or pictures for print. We put everything online and then we run it in print. It’s actually worked quite well, and we have a team of developers that work continuously on KK.”

The efforts from this development team is largely due to the fact that KK is viewed as one of the best developed brands within the portfolio of Aller Media, its owner.

“It’s kind of a test case for different solutions,” Heldal said. “That’s also how they came up with the full-format advertising, which is intended to give the readers the luxurious feeling of print magazine advertising, but online.”

Ingeborg HeldalKK was the first Norwegian brand to develop a full-screen size for ads (like the one pictured above), she said, but it was quickly copied by many others, both in-house and competitors.

“It looks really beautiful, and it’s sold out all of the time. It’s been quite successful actually, now we just need to have even more views on our website so that we can meet the demand from the advertisers, but it’s been a really good journey,” Heldal added.

In October, KK.no was awarded a World Digital Media Award from WAN-IFRA for Best Digital Advertising Campaign including Branded Content (it had also won a European Digital Media Award in the same category earlier in the year). And it’s something Heldal said that she and her KK team are very proud of.

“It’s a huge recognition that we are doing something right when it comes to being a frontrunner for digital advertising,” she said. “I’m really, really proud on behalf of KK for winning the award, especially our team of developers who came up with the really beautiful advertising format that now many others copy and want to use. Being recognised is always important. … I think it gives people a reason to straighten up and be proud of their product when you get recognition like that. So the award is standing in the middle of our editorial area – very sparkly and nice – and we’re all really proud of it.”

Staying ahead of the competition

The women’s magazine market in Norway is über competitive. As recently as five years ago, there were some 17 titles for women, and even today there are still seven, an impressive number for a country with a population of just 5.26 million.

“We are the frontrunner when it comes to the digital business, definitely. That is the main thing that separates us from all the other magazines. We have far better solutions for our readers and for our advertisers. We are lucky enough to be part of a very visionary publishing house that was interested in putting the digital-first strategy on the agenda. I think that is our biggest advantage.” – Ingeborg Heldal, Editor-in-Chief, KK.no

Heldal also noted that the printed magazine of KK still does quite well providing a solid income, which helps them to keep their position in the market.

“It’s also still very attractive among the advertisers,” she said. “In Norway, we say ‘it gives us more legs to stand on.’ It’s a more stable business model when you have both the print and the digital.”

KK has a full-time editorial staff of just 10 people who work for both print and online, she said, though like many publications, they also have a network of freelancers who regularly contribute content. Ad sales are handled by Aller’s united sales force.

“We don’t have our own sales staff,” Heldal said. “We have a huge sales staff, but they work cross brand. … They go to a customer and lay out all the different brands we have, and advertisers place the campaigns in whichever brands are suitable for what they want to sell.”

“It’s sold out constantly – we use it all the time,” Heldal said. “We have a native department that works only with native ads for the magazine brands, and in addition to KK, we also have a commercial native site called KK-shopping, which is only filled with native ads, which works quite well actually.”

“I think we’re going to do more and more native ads because both the advertisers and us see that it works very well, as long as we are doing the proper marking (identifying) on the native ads,” Heldal said. “We have to be transparent, and we cannot have a hidden agenda for our readers, it has to be very visible what is a native ad and what is an article. But as long as we are very transparent and tell the readers what they are getting, they are responding quite well to native ads, at least in the KK universe.”

All in all, things have been going very well for KK, Heldal said. “2017 is going to be a good year for us. We are selling better than budget on every issue now,” she said. “It’s hard for me to say how it’s going to be for the coming years, but for this budget year, it’s going to be a really good year.”

Looking ahead to next year, she said there are two main things that KK is going to work on.

“We have to work very lean,” she added, “and if you try something and it isn’t working, then you take it out and try something else. KK has been through a huge building phase, so now the whole skeleton is there, now we can start being really picky and developing the beautiful details.”

Secondly in 2018, Heldal said KK is going to work on its editorial profile. “Who is KK going to be for and what are we going to write about? What is going to be our tone of voice? Profile building is something we are going to work very intensely on over the next six to nine months, also on the print side because  print and digital always go hand in hand,” she said. “Even if the readers in print are a bit older, we have to maintain a profile that makes the reader recognise our brand whether she picks up the print or visits the website.”

Furthermore, KK will also be making a push towards more video in 2018, Heldal said. “We have a new video strategy that we are starting up with a dedicated in-house video team of four people who work across the brands and are going to produce live content for the sites,” she said.

Until now, KK has not had a clear-cut strategy for video yet, but Heldal said it’s something they are going to work on over the next six to nine months. “We have a new video studio up and we’re going to try out different solutions and see what will work best when it comes to live video.”

She foresees short videos from the sets of their cover photo shoots as well as live pictures from events or even something as simple as how to peel a boiled egg.

“We have to try different things to see what works best, but video is definitely a huge part of our strategy in the next months,” Heldal said.