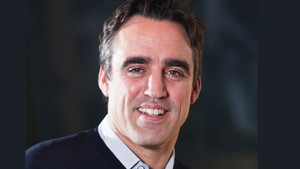 When ex-Googler Rian Liebenberg changed jobs in the group management team of Schibsted, the company sent out a special news release to explain the move. Nobody else in the new organizational set-up got the same treatment.

In fact, special treatment was reserved for him from the day he was recruited. Schibsted published videos with him being interviewed by Lena K. Samuelsson, a former editor at Svenska Dagbladet and now also one of the few females in the top management of Schibsted. The video message was clear: Rian Liebenberg will change Schibsted into a world-class, technology company.

Liebenberg was CEO of a 3-D mapping and location services start-up before joining Schibsted. Earlier, he was director of engineering at Google. He studied computer sciences in Cape Town and spent time in the South African Navy.

Liebenberg is the tech guru of Schibsted – maybe even more so in his new role. To date, he has brought about 600 new technicians into the group.

If it’s true that a company is its people, then there is probably nobody in Schibsted who has made a bigger impact on the company (with so many appointments) than Liebenberg. So we approached him for an interview.

He told us the 600 figure might be an undercount – he himself has stopped counting.

Our interview started out as a discussion of what Liebenberg had accomplished since starting out as chief technology officer (CTO) for the Schibsted Media Group in 2015, responsible for all technology, user experience, data and platform initiatives across all geographies.

The daily operations of Schibsted are now the responsibility of two divisions: Marketplaces and Media.

On Twitter, Liebenberg joked that his new title was C3PO (the ‘3’ stands for advertising, marketplace, and publishing).

After a period of centralizing tech under the leadership of Liebenberg, the new organizational model handed the responsibility for most tech functions back to the two divisions. According to Liebenberg, that was not a step back (for him or the company), but in line with the overall strategy.

“When I started out at Schibsted, the intention was always to be able to build globally scalable products and to build technology teams that can crucially deliver value and services beyond single markets and single brands. We have had lots of great successes in proving the value of that.

“It was always the intention for us to have the teams operate close to the businesses and operations, where they can add as much value as possible. The new organizational model, with one division for media and the other for marketplaces, realizes this vision.”

The re-organization will, of course, bring major changes to the lives of many employees. Almost one third of Schibsted’s staff is employed in the discipline of product and technology. These employees reported to Liebenberg in the old regime. How about under the new organizational model?

“The divisional CTO will report to the head of the business units (media and marketplaces). Again, the logic is that you want a fully functional management team that can collectively own the problems, and also solve them. It makes more sense,” said Liebenberg.

And, what will Liebenberg do?

Job has many different components

“My role will be very different. The job has many different components. Firstly, it is a strategic role at the group level, which intersects between the board of directors and the operating units of the divisions. Along with the CFO and CEO, I will own the technology and product agenda of the group.

“I will measure the performance of technology and products in the divisions against the financial metrics, and provide strategic advice and guidance to the management team of Schibsted on technology-related matters.”

“I will look at the rapidly evolving technology landscape, identify the opportunities and threats to us and understand how we can apply that in our business, and how we want to adjust our priorities and roadmaps to incorporate some of the ongoing trends.”

“We need to bring in more competence. So, we will create a committee chaired by me. In addition, I will continue to lead all the people working for the common group.”

“(This job) is a lot more strategic and a lot more long-term and forward-looking than running the day-to-day operations,” he said.

There will be a lot of work. The classifieds landscape will continue to change as the internet moves beyond the mobile-first environment to an AI-based environment, embracing VR and AR, voice-first and other, emerging technologies.

“There are many trends playing out that could be relevant for us,” he said.

“I think of the rapidly changing market around voice-assisted technology, I think of Amazon Echo and the Google Home type of devices that are entering the market, which will change consumer behavior, notably how consumers search for products and services or use information sources.”
– Schibsted Chief Platform Officer Rian Liebenberg

“I think they could impact consumer behavior profoundly, not just in our businesses and products, but for all online businesses. So, we will take a closer look at what they really mean for our business. The same thing is also true for augmented reality. Some of the experimentation we have seen could be quite relevant to us – both in marketplaces and in media.”

“We’ll investigate that a little closer, and understand it a little bit better to be well prepared.”

“Blockchain is another area we have an interest in. Most people associate it with Bitcoin. We think of it more as a way to understand machine-based transactions and a way to reduce fraudulent transactions. There are many interesting opportunities to explore in that space. But, it is a very new area, and it is somewhat unregulated at this stage. So, we will have to look at that carefully, to understand it better.”

“We also have AI domains with image recognition. I think some of our competitors, for instance, LetGo, are doing a pretty good job with it in the field of ad-listing by users. So much so, that they can really change the behavior on marketplaces.”

“We have been experimenting to some extent. Some of these technologies may even change fundamentally how we provide products and services,” he added.

Liebenberg will remain in London, where he has lived and worked for the last 20 years. The tech hubs he created in London and elsewhere will continue to operate.

Lars Herlin is an AIM Group senior analyst for Europe, and the group’s expert on Schibsted. He had a long career in journalism at Expressen, Svenska Dagbladet and VeckansAffärer, and served as managing editor and later managing director of Gotlands Allehanda. He was also managing director of a commercial radio station during the same period.