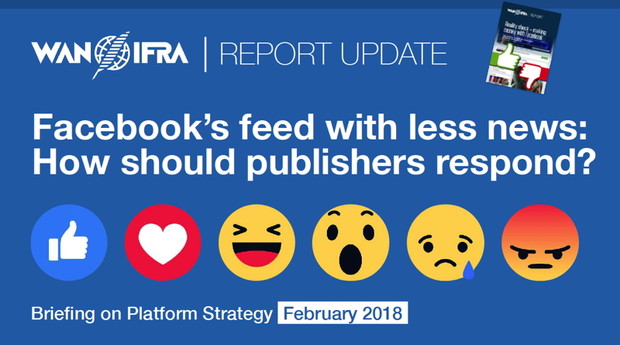 In the webinar and report, Piechota, a University of Oxford researcher, shares his take on the platform’s shift and offered advice on assessing risks and adapting to the situation.

The report, titled “Facebook’s feed with less news. How should publisher’s respond?“, is available free of charge to WAN-IFRA Members and is for sale to non-members.

Piechota said the announcements marked a strategic shift by the company.

“I think they want to cut the ties to the ideas that they are a publisher, and therefore they sacrificed some of the attention they used to gather from users all over the world, and they even want to sacrifice some of the advertising revenue,” he told participants in this week’s WAN-IFRA webinar (click here to replay the webinar).

“But we need to acknowledge that Facebook has never really prioritised news in the newsfeed. From the start, the architecture of Facebook was a network, not a broadcaster. It is really a communication platform, and its health is based on interactions of its users, and not whether publishers make money.”

He noted that publishers had been experiencing a decline in traffic from Facebook long before the January announcements. In fact, over the past six months some news sites saw their traffic drop by as much as 30 percent, although Facebook never provided an explanation for these developments.

Responding on a tactical level

As a result of these latest changes coming into effect, which marks the third time in three years Facebook has revised its algorithm to prioritise friends’ posts over other content, the company expects page publishers’ reach to drop by as much as 20 percent. The impact, however, will not be evenly distributed. Preferences will be given to, for example, local news outlets or news brands that are considered “broadly trusted,” Piechota said.

He outlined several measures publishers can take to respond to the situation and make up for the expected gap in referred traffic from the platform. For instance, they can try to mobilise their users by asking them to prioritise their posts or share stories in personal posts and messages.

Another option is to switch efforts to activities unaffected by the algorithm changes such as Paid Posts or Groups. Since 2016, US publishers have been doubling the amount they spend on Paid Posts each year, while also increasingly experimenting with Facebook Groups. And although groups are usually much smaller than the followings of a publisher’s Page, engagement is considerably higher.

“This is a trade-off. Of course, the risk with Groups is very similar to Pages. Right now, Facebook is prioritising Groups, but they can change their mind in a year, and whatever you have built might be useless,” Piechota said.

“You build a community, but it’s a community for Facebook, and not for yourself.”
– Platform publishing expert Grzegorz Piechota

Publishers can also adapt affected activities to the new directives by, for example, publishing more local content or optimising them for “conversation”.

What underpins many of these tactics, though, is the idea that in order to “spread your content on a network like Facebook, you have to get people to talk about it; that’s the only way it will work,” according to Piechota.

“As a broadcaster, you reach all of your followers at the same time. In a network environment, it doesn’t work that way. You reach just part of your network, and you need to convince your network to share your message. You need to structure your posts, and your content, and your calls to action in a very different way,” he said.

Equally important, he said, is to ensure that whatever publishers do on Facebook (or any other external platform for that matter) aligns with their business model.

Some news organisations, like public broadcasters that are funded through licenses, may use the platform as a means to grow their overall audiences; others, like subscription-based publishers, might mainly rely on the platform to acquire new customers, and not as a traffic driver.

Naturally, publishers should look for growth opportunities beyond Facebook in addition to tweaking their strategy on the platform to make up for a potential loss in traffic.

“I would say mobilise the existing users on your site, think about Google because it is already a huge source of traffic, and experiment with ‘dark social’,” Piechota said.

He will also speak at the World News Media Congress, 6-8 June in Estoril, Cascais, Portugal.