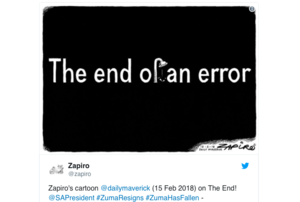 Forgive the intrusive missive, but today is a big moment for our small country, and it worth taking a second before the rush begins again (as if it hasn’t already) to reflect on what just happened. We are a small group; unglamorously paid, stretched in work, always up against it.  We operate in a much larger media universe, and in a much larger society and a truly gargantuan world. But what we have achieved in our small way over the past few weeks and years is just remarkable, and is rightly being recognised all over the country and the world.

And it is, at least partly, because of you.

The president has resigned, in no small part due to our efforts to right the balance in our politics and our society. As the Hawks have, at long, long last started arresting the people responsible for snatching the few pennies we have – pennies largely allocated to ordinary people of all walks of life but mostly to people much worse off than ourselves –  it’s worth just making a mental note of the small but important contribution we made. Don’t forget this moment.

Even when our desperate adversaries were tapping our phones, posting disgusting fake pictures of our staff members in compromising situations, spreading deliberately false rumours about our fidelity to our partners and our ethics generally, filling the news with vile racism and hatred, and, with such delicacy, inviting me to kill myself, I know that we did our part. When our competitors were fawning over politicians, excusing the inexcusable, when business was insisting it was influencing government privately, when they were marching outside our offices and our homes, we did hold that line. We did.

There will always be another story to write, another page to layout, another picture to take, another news conference to attend. I have always been proud of this newsroom, but no more so than today. Martin Luther King said the arc of the moral universe is long, but it bends towards justice. But you know, it doesn’t do that on its own! It takes an active citizenry, some honest bureaucrats and politicians, a mindful judiciary, and, last but not least, an active, fair, critical press.

We were that thing. Take a bow.”
Tim Cohen
Editor
Business Day
@Tim_Cohen