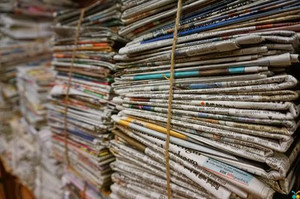 Monthly subscriptions. Price per-article. Registration required. Readers of online news are becoming increasingly used to paywalls, subscriptions and other hurdles to getting their daily dose of information. While it wasn’t so long ago that most people were happy to open their wallets to buy a newspaper or magazine, readers have been reluctant to pay for the news they get online.

But as news organizations continue to lose out from a decrease in advertising spending or struggle to stay independent of political influence, more and more are turning to some form of the subscription model for their online formats. It’s a trend that’s found primarily in wealthy economies like the USA, UK, Japan and Australia, with South Africa and parts of Latin America looking increasingly to this model.

“People are used to paying for newspapers. So in principle, paying for digital is nothing different.”
– Nick Tjaardstra, Director, Global Advisory at WAN-IFRA.

Reader revenue makes up around 30 percent of total digital revenue, with global digital circulation revenues growing by 28 percent year-on-year, according to WAN-IFRA’s World Press Trends 2017 report. But digital advertising revenue grew by only 5 percent from 2015 to 2016, meaning paywalls and online subscriptions are outweighing the value of advertising.

But in order for publications to convince readers to pay for digital subscriptions, they must be able to offer a unique product that readers can’t find anywhere else. And while a handful of stories are unique to certain publications on any given day, there are plenty of others that will be readily available on a competitor’s website or via social media like Facebook.

“The media industry is a highly competitive marketplace and is no longer based on scarcity but on abundance,” says Jeff Jarvis (in photo at left), Professor and Director, Tow-Knight Center for Entrepreneurial Journalism, CUNY Graduate School of Journalism, USA. “Whatever product you create, your competitor can produce the same for less or free. Paywalls are not the salvation.”

While some readers may be able to spend freely on the news, paying the equivalent of US$9 or 10 a month for an online news subscription isn’t possible for all, even in wealthy economies. Jarvis says that when he calculated how much it would cost him to pay for all the news he wanted to read over a two-week period, he would have to shell out upwards of $3,600 annually.

“I understand that you have to deal with the market reality, but if I hit a Wall Street Journal article that makes me pay, I’m going to go to Google and find the same one for free.”
– Jeff Jarvis

While some readers are choosing not to pay for their news – out of principle or financial constraints – for others it is simply not on their radar. In India, where a print newspaper costs just a handful of rupees, discussions about digital paywalls are still only in the early stages. And in the Middle East, paywalls and digital subscriptions remain rare or non-existent, says Tarek Atia, a Cairo-based media trainer and founder of the Egypt Media Development Program as well as media brands Mantiqti and Zahma.com.

“Nobody pays for online news in Egypt,” says Atia (in photo at left). “But we’re at a stage where lots of people in the business are starting to have the same realization that happened in the West a few years ago about this grave mistake we all made as publishers giving everything out for free.”

As of now, news revenue in Egypt comes primarily from print publications or subscriptions to digital news alerts via user’s mobile phone operators. Atia says that one popular publisher with significant brand recognition recently tried to create a paywall but ran into so many problems with the technical infrastructure that he was forced to abandon his plans.

“Publishers are struggling, revenue from online is going down and the value of banner ads is going down as well.”
– Tarek Atia, founder of the Egypt Media Development Program

“The economic realities may force publishers to come together for a solution but there’s no guarantee to make customers pay,” he said.

Still, the media industry in Egypt – like many countries around the world – struggle to remain free and independent from not only publishers’ interests, but also political influence, especially in the face of a crisis. Following the ‘Arab Spring’ revolution in 2011, Atia says Egyptians became increasingly interested in political news and the country saw a massive rise in news readership and social media use.

According to 2012 research by the Pew Research Center, 65 percent of Egyptians at that time did not use the internet, but 84 percent of those online regularly visited social networking sites for news about Egypt’s political situation.

Most publications have government or partisan ties

But as of now, the majority of publications in Egypt – like many publications in the MENA region – have government or partisan ties, with only a handful of privately-owned publications able to truly speak out. It is up to independent news organizations, in both Egypt and beyond, to stay afloat in order to be able to offer free, unbiased news.

As the value of advertising goes down, publishers are feeling an increased pressure to earn revenue via subscriptions. And with more and more users online, digital subscription models are a way to not only remain financially viable but also independent from outside influence.

But even in wealthy, stable societies, paywalls have been a work in progress. The Times in the UK lost almost 90 percent of its online readership in 2010 just weeks after introducing a “hard” paywall, while The Sun lost 60 percent of its readers after doing the same in 2013. “Soft” paywalls have fared slightly better, such as The New York Times’ or Financial Times’ models, where readers have access to a certain amount of articles per month before being asked to pay.

“Is anyone proposing to wall off all news? No. Can news publishers survive on free news? No,” says WAN-IFRA’s Nick Tjaardstra. “So they have to compromise: metering or offering so-called ‘freemium’ content. Or they go super-niche and hope they can find advertisers willing to pay for that niche.”

As news organizations around the world continue to navigate the digital age and what it means to provide access to information while remaining financially viable, one thing is clear: no one – yet – has all the answers. Media experts say the industry must slow down, think, and discuss what to do next.

“There’s a tendency to jump on the bandwagon when it comes to paywalls and there’s a desperation about what’s happening to the ad market,” says Jeff Jarvis. “We tend to jump on the latest messiah, but we need multiple revenue streams. No one thing will save us.”