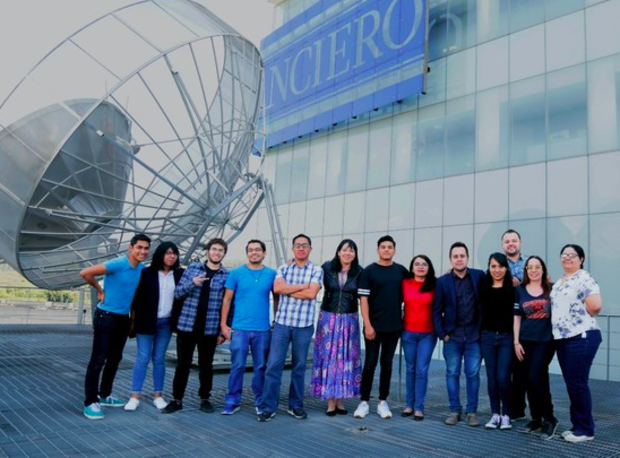 In February 2018 the newspaper, founded in 1981, re-launched its platform with a web design that aims for adaptability in the creation and consumption of content.

With clean and attractive typography, a responsive web page, a fresh colour palette and a mentality focused on the user experience, the paper is betting on a new site in search of versatility and coherence with their brand.

To understand the changes, we spoke with Alejandra César, Director of Digital Content for the El Financiero brand and head of this ambitious project, which has already shown results just one month after launch. César explains that they have seen important and surprising audience growth that seems to be triggered by the fast loading speed of the new site.

A redesign for both digital and print

On 12 February, the printed version relaunched with typography that moves away from formal newspaper design and attractive graphics that evoke the experience generated when browsing a website.

“The web design influenced the print version. At one point it became clear that we could not change our page and leave the print intact.”
– Alejandra César, Director of Digital Content, El Financiero

The conception of the new digital strategy took almost a year and a half; the definition of goals and the recruitment of people for the different areas proved time-consuming.

Several challenges arose, especially in the attempt to make both the content and the graphic identity communicate the same idea: “Something we wanted to promote in El Financiero is the idea that you don’t have to be solemn. You have to be serious, but the information we create should be important and newsworthy to anyone,” she says.

The new web design is, without a doubt, innovative. Its developers broke with the traditional three-column design and, after hearing offers from third parties, developed a new CMS (content management system) of their own, which is versatile, with seven screen jumps, where all the spaces of the site are movable. As César suggests, having a user-friendly CMS saves time and allows you to focus more on the creation of content.

In the same way, there was a significant investment of time in the new design of the articles.

“We wanted articles that were well-read and that had graphic elements, but that were above all in tune with the specifications and needs of search engines and distribution systems of social media.”
– Alejandra César, Director of Digital Content, El Financiero

Businessman Manuel Arroyo focused on the modernization of the company, and the implementation of new technologies are reflected in this redesign.

Although the new site functions well, César recognizes that there are still steps to be taken. There are sections that must be worked on more. Also, she doesn’t reject the the option of creating a native app. El Financiero’s current app is an encapsulation that loads the website.

First step towards a paywall?

Asked whether this redesign is a first step towards a paywall, César says that is something they are analyzing, and they plan to move in that direction, but not yet.

The paywall presents challenges in aligning the editorial, commercial and business parts.

“After all, a news outlet has a public and social purpose, but it also has to be a profitable company to function. We have not contemplated a strategy, but I think these are the kinds of questions we should all be asking ourselves.”
– Alejandra César, Director of Digital Content, El Financiero

The ambitious redesign positions El Financiero among the country’s traditional media with the most advanced digital bets, prioritizing the experience of its audience when it comes to designing its news site.

At many outlets, the website is still an extension of the paper version. Breaking that pattern requires not only a good dose of creativity but also a real will to change: “I think what makes El Financiero different is that we take risks,” César concludes.

The original post in Spanish can be found here.