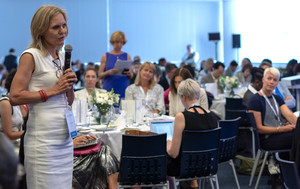 By Melanie Walker, Director of Media Development at WAN-IFRA who heads up the Women in News programme


Last week, Fatemah Farag, who for two years has led the Women in News programme for the Middle East and North Africa, was voted onto the Board and Executive Committee of the World Association of Newspapers and News Publishers (WAN-IFRA). Lisa MacLeod, head of digital for Tiso Blackstar Group in South Africa and an active member of the WAN-IFRA Media Freedom Brain Trust, was named Vice President, signalling the first time a woman has been named to the Presidency – WAN-IFRA’s top governance body – in the organisation’s history.

Karin Pettersson, Director of Public Policy at Schibsted Media Group, the (first female) incoming Chair of the WAN-IFRA Media Freedom Committee, was also elected to the Board and Executive Committee of WAN-IFRA. Rameeza Nizami, Editor in Chief and Publisher of Nawa-i-Waqt in Pakistan was appointed to the World Editors Forum Board.

Maria Ressa, the founder and CEO of Rappler.com in the Philippines, was awarded the Golden Pen of Freedom, WAN-IFRA’s highest press freedom award. Two exceptional women editors, Barbara Kaija of New Vision in Uganda and Noura Hourani of Syria Direct in Jordan, were recognised as 2018 Laureates of the Women in News (WIN) Editorial Leadership Award.

We enjoyed another at-capacity Women in News Summit, with an exceptional and diverse group of speakers. Out of the 97 speakers who took to the stage in Estoril, 46% were women, also precedent-setting for a WAN-IFRA Congress.

However, it is impossible to write about these accolades and accomplishments, which coincided with the 70th World News Media Congress, without also recognising other events that occurred during the 3-day conference in Estoril, Portugal.

The most upsetting incident was the open display of sexism at the gala dinner by the head of the Portuguese media association hosting the event.

The incident left many in shock – first and foremost my colleagues who were subjected to the public embarrassment onstage. That a prominent figure would act in such a way at a moment of global focus on precisely this kind of behaviour was unfathomable.

The incident prompted a public statement the following morning by WAN-IFRA President Michael Golden. The individual in question also apologized for his behaviour. However, there was a sense that he did not fully understand why he was doing so; in a Facebook video currently making the rounds, he says cultural differences are to blame and that Portuguese women would not have been so shocked by his behaviour. Many were, and expressed this both in person and online.

It is no secret that the media industry trails behind other industries when it comes to gender equality. The fact that women make up only 17% of top management positions within the world’s largest media companies is testament to this imbalance. This continued imbalance prompted the inception of the Women in News programme eight years ago, almost to the day. Eight years on, these figures, as well as the out-of-touch attitudes of a few, are discouraging.

When I reflect on the progress that WAN-IFRA has made when it comes to mainstreaming gender equality in recent months – a small part in a larger movement within the media industry which we aim to help drive forward – I am, however, also encouraged.

Recognising we needed to be far more proactive to balance the gender scales within our organisation, in December 2017, WAN-IFRA adopted an unambiguous gender strategy that aims to achieve gender parity across all content, programmes and within our management structures by 2021. We have a similar target to hit 30% representation of women within our Board by the same date.

We are starting to see the results of this public commitment:

In response to the sexist and inappropriate behaviour that occurred during the gala dinner, WAN-IFRA President Michael Golden addressed it and condemned it publically. He apologised to the women on the receiving end of the behaviour. The World Editors’ Forum issued a formal statement condemning it earlier this week. WAN-IFRA’s leadership has acted swiftly and decisively. This was the right and only response, and I am proud to be associated with entities that did not shy away from confronting and condemning such behaviour.

However, we must also recognise where we fell short in Estoril.

The lack of diversity during the opening ceremony of the Congress was a stark contrast to the Women in News Summit that preceded it. Because of the lack of diversity on stage, an occasion that celebrated the 70-year history of a proud organisation founded in a deep belief in freedom, democracy and human rights was most notable – at least for the first hour-and-a-half – for the missing women.

Failing to get this piece right cast a shadow on the efforts of the WAN-IFRA team and management to mainstream gender diversity throughout the Congress programme, and the spirit of the WIN Summit, which celebrated diversity and shared organisational strategies to promote gender equality in leadership as well as newsroom content.

Throughout the past few days, I have had countless discussions reflecting on Estoril. Conversations about the demonstrable gender gap in this industry and the ripple effect of this imbalance; what constitutes sexist behaviour, sexual harassment, and abuses of power. And how cultural and linguistic differences – an important factor in a global organisation – can shape perceptions and even definitions of these terms and behaviours. These are important, and often difficult conversations to have. And it can be difficult to reach consensus. The nature of the conversations also underscore just how vital it is for organisations to have them – from the boardroom through to the operational and administrative departments.

WAN-IFRA launched the Women in News programme to work from within the industry to identify collective solutions to bridge the gender gap within our leadership structures and voices. With the events of last week, and the indisputable statistics presented both at the WIN Summit and cited above, it is clear there remains a lot of work to be done.

WIN will continue to develop and make available the resources and tools for media managers to mitigate incidents of sexual harassment. We released a toolkit on sexual harassment last month, and are now developing a training module geared to media managers and employees that we will make available to all media houses beginning this autumn. We are working on a similar toolkit and module that focuses on editorial and organisational strategies to promote greater gender equality in content, working with leaders and allies from within the industry to develop best practices and practical tools to share with media organisations. Much of these best practices were shared at the WIN Summit last week.

Internally, we are looking at how to ensure that the representatives of WAN-IFRA adhere to our standards of conduct, and are sensitised to issues of harassment, sexism and unconscious bias. We will keep working toward our internal targets to meet our stated 2021 gender equality objectives.

And we will continue to encourage constructive conversations around the subject of what constitutes acceptable and non-acceptable behaviour. As WAN-IFRA President Michael Golden stated so aptly: what is important is not the intention behind the act, but how the recipient is made to feel.

The public’s reaction, WAN-IFRA’s response, and the continuing discussion and coverage online is the silver lining to have come out of such an uncomfortable and unacceptable incident. The events of the past few days would not have played out in the same way even just 12 months ago, which is progress.

This is a statement that I opened last week’s Women in News Summit with, and I stand by it. With the commitment of our top management as well as Presidency, we will continue to hold ourselves to account, while working with our global peers on moving the needle on gender equality in the industry. Together we can, and will, do better.