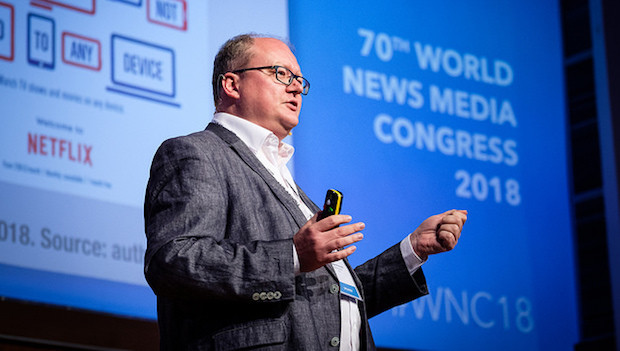 “The biggest thing that has changed in the last few years is that more and more publishers are realistic about what platforms provide, and how they are helpful to their business,” says Grzegorz Piechota, a researcher at the University of Oxford and Harvard Business School.

Ahead of his appearance at WAN-IFRA’s Digital Media LATAM conference, taking place from 14 to 16 November in Bogotá, Piechota, who studies technology-enabled disruption patterns across industries as part of his work, explains how publishers are deriving revenue from platforms, what the latest major developments are, and how news organisations have responded to them.

Piechota is the author of two WAN-IFRA reports on Facebook, Reality check – making money with Facebook, and Facebook’s feed with less news: How should publishers respond?

“Publishers see that platforms such as Facebook are not only distributors of content, they are fierce competitors for advertising revenue. Google and Facebook are already dominating the digital ad market in big countries, such as the United States, and most of the growth of digital ad spend is actually going to these two companies, so publishers need to be very strategic about how they engage with platforms that are actually their competitors.”

(This interview has been edited for length and clarity.)

WAN-IFRA: In terms of revenue, is there any platform you can point to that is truly helping publishers drive decent incremental revenue? Or are publishers exploiting all the possibilities?

Grzegorz Piechota: Based on international benchmarks, we see that publishers do get some value from different platforms, but in many different ways. When collaborating with Google, many publishers get some revenue from advertising being posted on their sites. There are also publishers that are successfully monetising their YouTube presence through distributing video content.

But they also derive value in other ways from other platforms. For example, although advertising revenue from Facebook is rather low, you see publishers that are very successful at using the platform for subscription sales.

They have moved away from treating platforms as distribution channels, and look at them more as marketing channels for their business.

The New York Times uses Facebook, but they use it to find the right potential customer for their subscriptions.

The products that Facebook has built for publishers to monetise through, for example advertising within Instant Articles, have proved to be not that important but you can use Facebook’s advertising tools to target your advertising to certain groups of people, and use Facebook’s big data to create lookalike audiences. These tools prove to be valuable for publishers. Of course, it means they actually monetise the audience, and Facebook is not paying them anything, but it shows that there is some value in working with the platform.

Apple News seems to have become a bit of the platform du jour, of late. How is that working out for publishers in terms of revenue?

Firstly, we know that people who use Apple devices are rather more affluent than less affluent, and rather more educated than less educated. In general, Apple device owners are somewhat attractive to news publishers as a customer group. Apple News is being distributed as a pre-installed app in some countries, meaning everyone who has an Apple device has Apple News and lots of people are actually using it. Publishers in some countries, especially English-speaking countries, actually see a huge number of traffic coming from Apple News. Some publishers have found that it is actually a very good source of traffic if you want to convert the traffic into subscription sales. This is, of course, because Apple News is on Apple devices, and Apple devices suggest that the user might be more educated and more affluent. So it’s a good fit for subscriptions, for example, and some publishers have seen success with it.

But when we talk about monetisation from advertising, it is very much lagging, and publishers are saying it doesn’t actually work.

If you want to target a certain customer group that is perhaps more likely to subscribe, it seems to be an interesting entry point, but if you think about making money with the ads, there is just nothing there. You need to first decide what your strategy towards distribution channels is, and what your business end game is. What do you want to achieve by engaging with the platform, and then look at the benefits and risks. So in some situations Apple News will be an attractive partner, and in some others it won’t.

Some experts and publishers have argued media companies should disentangle themselves as much as possible from platforms. What is your view on that stance?

It was common for a few years to talk about platforms in a very emotional way, in terms of friends and enemies. My position is that a pragmatic approach is much better, so I would analyse the benefits and risks involved in doing business with platforms. Platforms have some advantages that publishers can use. If you want to grow internationally, and find customers in faraway countries, platforms are very efficient in doing that and are cost-effective, too. If, for example, the majority of your users are male, and you would like to find female users for your content, you could advertise in some other publications but you can also use Facebook and Google. Their advertising targeting tools are actually very robust. Or imagine that you have a user that has already become a subscriber, but, for some reason, forgets about coming back to the site. In that case, you can use the platforms that people use everyday to remind subscribers about your business, activate them and drive usage. There are scenarios in which platforms are very efficient and effective. Why wouldn’t you use them? There is a big difference between doing nothing and doing everything on platforms. It’s silly to move from one extreme to another.

What are some of the other major developments that have happened in the past year or so with regard to digital platforms?

Messengers are becoming very popular social networks, and people also use it for sharing news. This is a big shift in the way people use social networks. According to Chartbeat data, the dark social traffic to news websites from mobile worldwide stands at 17 percent.

But what I personally find most exciting is that you see publishers reclaiming social features.

They are actually realising that conversation around content is a huge part of the value proposition, we just surrendered it to the platforms. Now there are publishers that are reclaiming it and finding that there is a lot of value in it.

One example is Polish newspaper Gazeta Wyborcza that put the comment section behind a paywall. You need to be a paying subscriber to be able to add comments. And the results are absolutely fantastic. Firstly, the number of comments went down after the change, but has actually recovered within a year and is now bigger than it was a year before. Secondly, the quality of comments is much higher, there are much fewer trolls and abusers in the comment section. You have higher quality, less abuse, and people value this as part of their subscription, they feel privileged. Instead of people having these conversations on Facebook, you can create value for your users by making it available for subscribers. This is a great example of how you can create value through conversations around your content.

The second example is from Denník N in Slovakia. They moved sharing stories to the premium paid package. The idea is that when you get to Denník N and you are a subscriber you can not only read it as a subscriber but you can share this article for free with your friends. You can do it via email, on Facebook, on Twitter. And everybody who gets this link and gets to the website will see the message ‘It’s great to have friends. Thanks to XX, you get this article for free. Leave us an email’. People are very proud of being subscribers of Denník N because they can share paid stories for free with their friends. It’s an amazing tool to get prospective subscribers because these are friends of people who already are subscribers, so the likelihood of them becoming subscribers as well is much higher. You get this amazing lead from emails that people put down who came from the link, and you can start promoting a full subscription to them. This is an example of how sharing is valuable for customers, and how it can be used for viral growth of the publisher’s presence.

These are two great examples of how publishers analyse the reasons for the success of platforms. Activities like conversations around content and sharing content can actually be used with success in the publisher’s own environment.

At Digital Media LATAM, taking place from 14 to 16 November in Bogotá, Colombia, Gzegorz Piechota will share insight into what makes a compelling digital publishing strategy, what value propositions leading digital platforms are bringing to publishers and how media companies are adjusting to the latest industry developments. Additionally he will teach the Masterclass “Digital Platforms Strategy for News Publishers”.