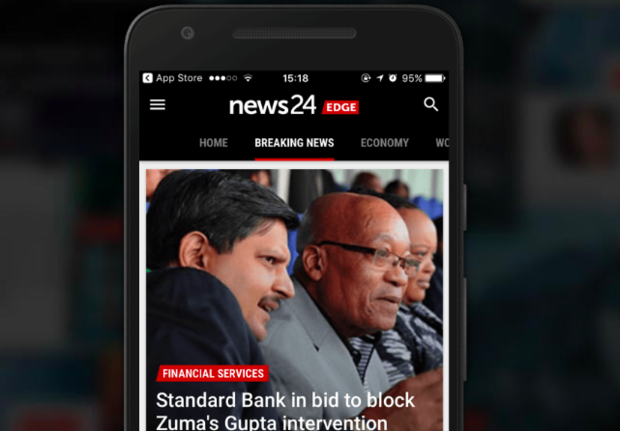 The year since the African Digital Media Awards 2017 (AFDMA 2017) has seen a number of important developments on the continent’s digital landscape. Media groups faced rough storms in a fast-evolving news ecosystem, and there have been some interesting responses as media houses try to find their way through the murk.

As we approach the 2018 Awards, and the Digital Media Africa Conference, let’s take a look back at some of last year’s winners and examine the innovations that set them apart.


Andreij Horn, head of 24.com, says digital audiences are increasingly mobile and highly sophisticated, and need value propositions that work for both sides of the equation. The News24 Edge app won Best Mobile Service at the AFDMA 2017, and became joint winner at the World Digital Media Awards.

“We believe people are time-starved and that they value us using technology to help them find the content they enjoy faster and easier. Ironically, the more we help our users save time in this way, the more they reward us,” — Andreij Horn, 24.com

The News24 Edge app was specifically launched next to the classic News24 app as a learning space. It was a chance to improve algorithms and enhance the user experience through machine learning and Artificial Intelligence. The lessons are paying off.

Horn says the app achieved what it was set out to do: “We are able to effectively track user behaviour and recommend stories based on each user’s consumption patterns, which forms the basis of a seamless and convenient personalised experience.”

The explosion of online video also meant audiences don’t just want to be informed. For them to connect the dots content has to be high quality and engaging.

Diana Neille, the founder of Chronicle Media, says they did not want the important reporting that the journalists had already published to go to waste. Some readers would simply not engage with the extra long and in-depth reports.

“So we turned some of their most important stories into short, meant-for-social-media, presenter-led videos that broke down the investigations to the most basic information. We felt it was important to ensure the stories reached the broadest audience possible,” said Neille.

The video enjoyed interaction from audiences across platforms, something worth noting when, according to Neille, rising authoritarianism and bipartisanship are suppressing press freedom.

The growing focus on online content, e-commerce and technology in the African digital space seems to have led to some serious thoughts about new revenue generating strategies.

The puzzle seemed to have been how publishers can stop the flow of advertising revenue towards lower quality content.

The PwC Entertainment and Media Outlook: 2017-2021, said in 2017 content producers faced tough choices and had to find new revenue streams to sustain their high-quality offerings.

The temptation to churn out poor quality clickbait is also always lurking, the report said, but it can lead to some failures due to revenue loss to social media.

According to Neille the longstanding misconception has always been that quality video journalism is cheaper than film production. This, she says, has never been the case, but investing heavily in video can be worth the price.

“Many publications began panic-producing digital video for free, setting an unsustainable precedent. However, digital video done right, for the right reasons and with the right intentions – for specific campaigns or projects and with a social media audience specifically in mind – can be very effective,” — Diana Neille, Chronicle Media

A few wily business models have emerged. Some newsrooms have combined the use of metered paywalls which offer access to quality content with enticing advertisers. They offer a regular, growing and exclusive audience.


The reinvented BusinessLive.co.za, AFDMA 2017’s winner for Best News Website scooped by Tiso Blackstar, offers advertisers an audience of about 1 million users. They also get to pick from any of the familiar Tiso Blackstar titles to target specific audiences.

Tiso’s managing editor for digital, Riaan Wolmarans, says the idea was to bring all their various titles under one online home.

“We built BusinessLIVE as a wrapper of sorts for sub-sites for Business Day, the Financial Mail, Rand Daily Mail, the Sunday Times’s Business Times, and Investors Monthly. We also added syndicated content from the Financial Times in the UK.”

The masterstroke was not to diminish the prominence of the other titles but to rather create an attractive paywall offer where readers pay for one package. Subscribers get access to the best content from all the titles.

The restructuring comes at the right time, when many readers are becoming wary about fake news and unscrupulous sources. Digital Media: the subscription prescription, by Deloitte, says there is growing awareness of the variability and quality of online news. Fake news is actually pushing audiences towards more credible and reliable content that readers don’t mind paying for.

Wolmarans says business news readers insist on quality products. Website analytics also send a message to digital media managers about what publications should do to offer an attractive mix to readers. Improved workflows and experienced editorial staff for oversight are good starting points.

“We also know speed can be important in business news, such as reports on company results and stock-market movements – but it’s also essential to publish in-depth and analytical content that delves deep into the topics of the day. The former attracts readers to BusinessLIVE, but the latter keeps them coming back,” –Riaan Wolmarans, Tiso Blackstar

The last year has been a year of growth and renewed investment in digital. Last year the Nation Media Group‘s digital division posted 42% growth. This added 4% to its operating income, up from 1.5% in 2015.

This year’s Digital Media Africa 2018 conference is an opportunity to explore new digital revenue models, to test out various experiments for paid content and monetization. The conference will be wrapped up with the crowning of the most daring innovation efforts at the African Digital Media Awards 2018.