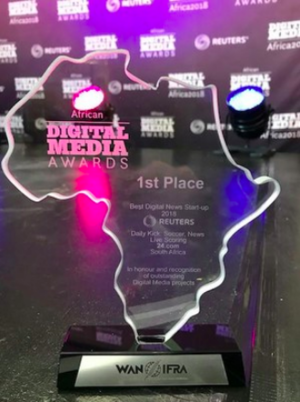 “We had a range of organisations, from startups to mainstream media. It is great to see the number of entries here tonight from the smaller startups, especially those with support from the Media Development Innovation Fund,” MacLeod said.

“This year we have been working a lot with startups, something we have not been doing in the last few years. We came up with a very big initiative to start looking at the growth that is happening in the African continent,” –Zione Akule, Reuters

“We had a really good mix of grassroots startups as well as big players in the various categories and we are confident that the continent will once again do well when competing in the global awards,” Tjaardstra said.

“It’s particularly good to see the high quality of projects on Branded Content and Reader Revenue. Digital news needs a sustainable business model – and everyone can learn from the winners! We extend our congratulations to the winners and huge thanks to all the judges,” –Nick Tjaardstra, Director Europe & Africa, WAN-IFRA

Speaking from the viewpoint of the panelists Amandla.mobi founding director Koketso Moeti, said the value of digital cannot be overstated, particularly when the next wave of a billion users will go online.

“Digital media offers an important opportunity for media to engage with all audiences in very new ways and in real time. It is exciting to have noted just how many people are thinking deeply about the quality of their content, new ways of engaging new audiences and bringing people online,” –Koketso Moeti, Founding Director, Amandla.mobi

Media24 came out big winners of the night in three out of 10 the categories. Theirs was a slim margin — Kenya’s Nation Media Group and the BBC got two awards each, and Independent Media, WhatsApp Integration Project and Morocco News Agency received one award apiece.

MacLeod said the next leg of the wards, the World Digital Media Awards, would be held on 1 June next year in Glasgow, Scotland, during WAN-IFRA’s World News Media Congress, and will be an exciting opportunity for the winners to be further honoured for their work.

All of the winners from Africa will be automatically entered for the Global Awards.

The winners for the 2018 African Digital Media Awards are:

Click here to see images from the awards ceremony.

Article by Tebogo Gantsa, for WAN-IFRA.