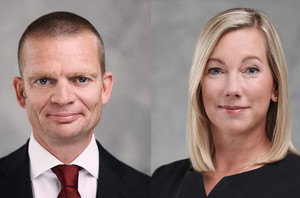 The company announced in November two major shifts in responsibility regarding both its international and domestic operations: After being responsible for both Axel Springer’s international media business and its German media brands since 2017, Jan Bayer (pictured above) will now focus solely on driving the company’s expanding international media business (News Media International), which is growing particularly in the U.S. “The aim is to ensure future growth by investments and increased cooperation across Axel Springer brands abroad,” according to the company press release.

Correspondingly, effective on 1 January, Stephanie Caspar (pictured above), board member responsible for technology and data, will take over full responsibility from Bayer for Axel Springer’s media brands in Germany (News Media National), including advertising sales, distribution and printing business.

Additionally, she will take over the responsibility at the board level for idealo to further expand the existing cooperation of the digital media brands and idealo. For more than a year, and in addition to her company-wide data and technology strategic role, Caspar has been responsible for Axel Springer’s digital media brands in Germany (particularly Bild.de, Welt.de) and Media Impact’s digital advertising sales. She will also assume overall responsibility at the board level for print media brands (primarily Bild, Bild am Sonntag, Welt, Welt am Sonntag, Auto-, Computer- and Sport Group, music magazines), print advertising sales (Media Impact), distribution and printing business.

Axel Springer CEO Mathias Döpfner said at a recent press event in Berlin: “In the USA, we became profitable this year and thus earlier than expected with BUSINESS INSIDER, the digital market leader in business topics. In Europe, we have continued to expand UPDAY as an important player among news aggregators and will also earn money with this offering in 2019. On a national level, the paid content offerings BILDplus and WELTplus are contributing more and more towards compensating for the declining sales revenues from print. This clearly shows that digital journalism is becoming increasingly profitable at Axel Springer.”

Indeed, Axel Springer enjoys a thriving digital business as its contribution to profits recently rose to around 81 percent, according to Handelsblatt, and to around 69 percent of consolidated sales.

Splitting the business on the horizon?

Döpfner even hinted at a further possible reorg in the future during an Investors conference in London on 12 December: He said that all options are on the table but that possibly splitting the company’s business into two divisions, focusing on digital content and marketplaces, or classifieds, could indeed be an option, according to that report Handelsblatt.

“We are constantly evaluating and discussing structural issues,” he said, regarding such a split in the business. He even made reference to the Nordic-based media group, Schibsted, which announced a similar move in late September.

Döpfner said he expects sales growth in digital classified ads of more than 10 percent in the next three years.

Friede Springer said in the press release: “I am pleased that the conditions necessary for a reliable perspective of the company for employees and the Board of Axel Springer are still in place. This allows us to continue the company’s great success story.”