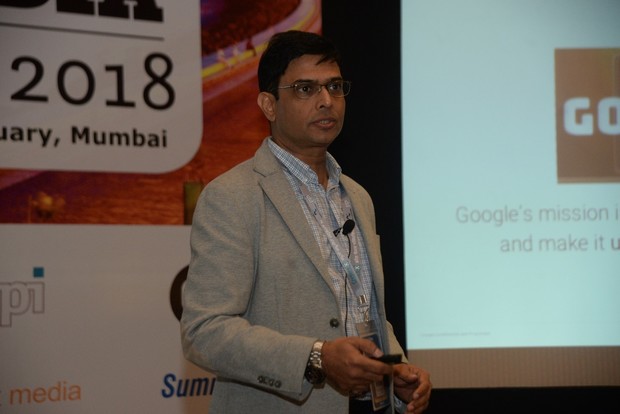 On the global platform, news websites get more than 10 billion clicks every month through Google, Agnihotri said. Over 5 million hours of news content is consumed on YouTube on a monthly basis.

“These numbers are only growing,” Agnihotri said.

In 2012, some 18 years after the start of the internet, the number of people in India online reached 100 million. Within another 13-15 months, another 100 million were logging on. Eighteen to 20 months after that, the internet in India saw its third batch of 100 million people.

The first group of people were all English speaking; the next set was from the Indian language group.

After the Indian mobile network operator RelianceJio hit the market, the number of internet users in India rose to 450 million.

Google estimates there will be 500 million Indian “language users” in the next two years.

In August, at the company’s “Google for India” event, the search giant stated that 90 percent of 135,000 print publishers in India do not have websites, and it aims to help bring them online.

When you search in Indian languages, the content available is just 1% of what’s available in English. Here’s how we’re trying to solve that. http://g.co/navlekha  #GoogleForIndia 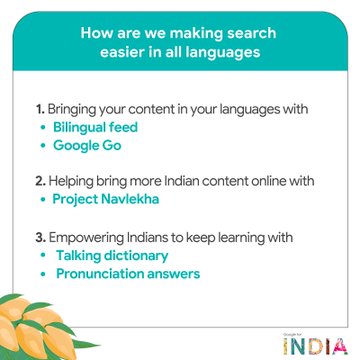 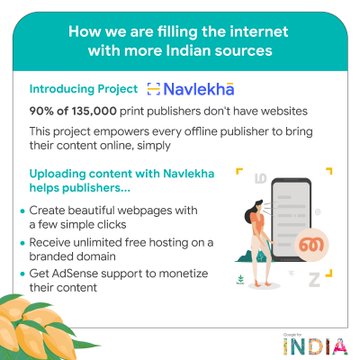 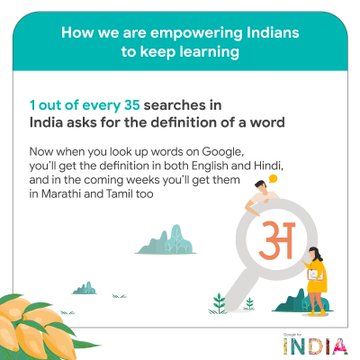 64 people are talking about this

The company launched Project Navlekha, in a bid to bring those publishers under the online umbrella by making web hosting smoother and easier.

Navlekha, which in Sanskrit means “a new way to write,” allows publishers without websites to make their offline content suitable for online publishing in less than a minute.

The platform, using artificial intelligence, enables them to convert any PDF containing Indian language content into editable text, doing away with the need for expert digital knowledge.

Navlekha helps Indian writers gain more readership and recognition without having to struggle to sell their written copies physically.

Under this project, publishers are offered free hosting, a branded domain for the first three years as well as AdSense support so they can start monetising their content immediately.

“The majority of internet users in India today are Indian language users, and this number is expected to reach 500 million in the next two years. Smartphones are not useful unless they work in people’s primary language and provide access to great content in their native tongues. Right now, the amount of online content in Indian languages is only 1 percent of what’s available in English,” said Rajan Anandan, VP, India and SEA Sales and Operations, Google, in a statement.

Furthermore, Google Go now provides audio playback for news in English, Hindi, Marathi, Tamil, Malayalam, and Telugu. “For Search to be truly helpful, it should bring you useful content, in all the languages you understand,” said Shashidhar Thakur, VP, Engineering, Google Search, at the launch.

Most internet users are mobile-only

Why did it take 18 years to reach the first 100 million? Agnihotri attributes it to a dip in device and data prices, and technology becoming intuitively simple for people.

At this point, India has 280 million people who consume news online. Of them, 106 million are form the Indian language group and 32 million only consume news digitally.

“Nine out of 10 people on the internet in India are only mobile users. Today’s empowered user is curious and is increasingly becoming better informed. Our focus is thus on the art of storytelling, audience engagement, retention, growth, revenue, data and innovation,” — Vikas Agnihotri

In India, depending on the publication, the search referrals range from anywhere from 30 percent to as high as 80 percent. Video consumption in India has gone through the roof. During the past 2-2.5 years, YouTube has seen its monthly subscribers quadruple: going from 60 million to 240 million.

Approximately 80 percent of people in India consume news through their smartphones.

Agnihotri also said that Google is trying to move away from rectangular and square ads to more native advertising so that it gels well with the content the reader is consuming.

“We need to make sure people are actually reading ads and not blocking them because ads mean revenue for everyone in this industry,” he said.