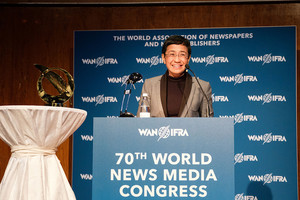 “The continued targeting of Ressa, her staff and board of directors, using the Philippines legal system, is a clear attempt to harass and silence her and the independent news operation she runs, Rappler.com,” the World Editors Forum Board said in a statement.

Ressa has faced seven active legal cases while there are 11 cases overall against Rappler, its directors, and staff in the 14 months since the Securities and Exchange Commission first tried to shut down Rappler.com.

“We urge editors and journalists everywhere to support Ressa and her team, whose brave resolve is an example to all who believe in journalism and its mission to hold power to account.”

According to Rappler.com, the charges are related to the Securities and Exchange closure order against Rappler in January 2018, which the Court of Appeals has told the SEC to review.

Earlier this week charges were filed against Ressa, who was out of the country, managing editor Glenda M. Gloria, and five other members of Rappler’s 2016 board, namely Manuel Ayala, James Bitanga, Nico Jose Nolledo, James Velasquez, and Felicia Atienza. The complaint against Rappler’s former corporate secretary Jose Maria Hofileña was dropped.

Gloria and the five board members posted bail Wednesday afternoon ahead of issuance of warrants of arrest.

Their charges are linked to the claim that they violated the Anti-Dummy Law in issuing Philippine Depositary Receipts (PDRs) to foreign investor Omidyar Network.