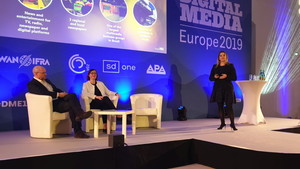 The emphasis on engagement arises from a growing trend toward digital subscriptions among publishers in Europe. And as publishers compete for a finite pool of subscribers, competition for recurring reader revenue is only going to become fiercer over the next few years.

Anita Zielina, Director of Innovation and Leadership at the Craig Newmark J-School/CUNY pointed out at #DME19 that every organisation she has spoken to in the past few years has had a digital subscription in effect, under development, or in discussion.

Andiara Petterle is SVP of Product Development and Operations for RBS Group, which reaches 11 million people in Brazil. After revealing that RBS is effectively planning for a print-free future, she noted that user data is key to the development of products that an audience will continually pay to support.

Petterle said, “Churn in digital is very different than churn in print; in digital, churn is tied to consumption. If people consume per month 51-100 [pieces of content], churn monthly is 1.9%. If they consume fewer than 50, it’s 2.7%. It’s a major difference. [So] how do we control usage?”

RBS’s data also demonstrates that people who use the dedicated app consume much more content than do visitors to the desktop and mobile sites. Consequently, RBS has organised its other media properties to promote the app, in service of reducing that churn. As a result, after three years of radical change, RBS has 97,000 digital-only subscribers.

Change: Data is key to become an e-commerce startup. ⁦@apetterle⁩ about the transformation of her media company. #dme19 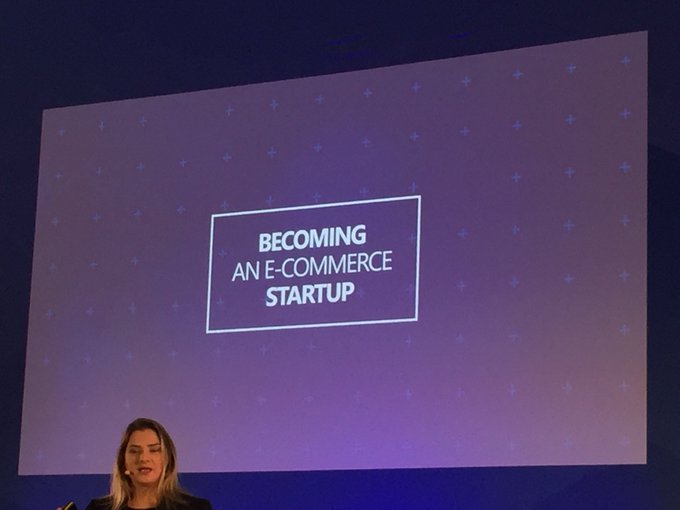 Petterle also noted that whereas in print all the work on strategy is done prior to product launch, digital publishing requires constant iteration on an evolving strategy: “The work starts when people are reading.”

Pål Nedregotten is Executive Vice President of Amedia AS in Norway. Across its newspapers and media properties Amedia reaches 2.2 million subscribers each week, which equates to more than half the adult population of Norway. He believes the key to success in subscriptions lies in accurate user data. Amedia consequently has a focus on the behaviour of its logged-in users and a stock of user data upon which it builds its editorial and commercial strategies.

Nedregotten said, “At the moment we are logging around 1,000 user touch-points per second. aID is our single log-in… we call [it] Norway’s largest media panel… enabling us to model those who aren’t logged in.

“This is important because it tells you the story about how many subscription stories people actually read combined with churn. Essentially, the more you read the less you churn, and that is crucial… That ties journalism directly to the financial needs of the company,” he said.

He explained that aID data helps inform the newsrooms which stories are valued by subscribers and where there is a mismatch between the attention a newsroom gives to a topic and audience interest in that subject. “What we wrote most about turned out to be the least read. We’re producing too many sports stories… and too few economy, business and finance stories. Average numbers aren’t telling you the whole story.

“Volume actually matters… Readership tends to follow the amount of well-written stories a newsroom produces per day. Getting them to write more, hitting more readers, hitting more subscribers…. This tends to correlate with the development of subscriptions,” Nedregotten said. 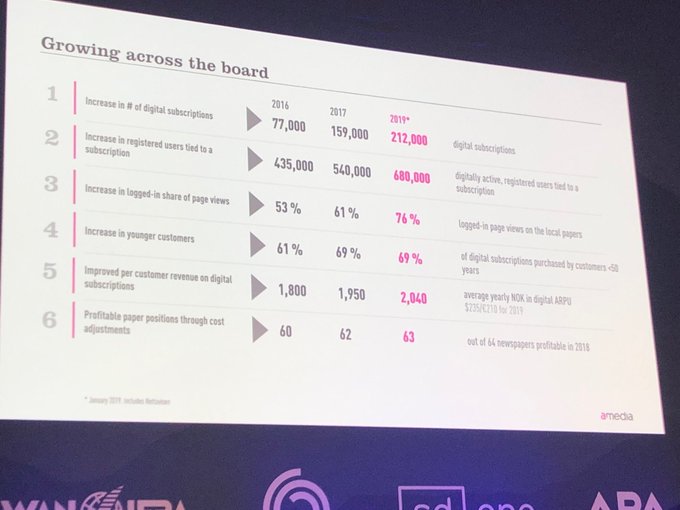 He noted that the most important editorial metric across the brand is the ‘plus reader’: How many of those who subscribe chose to read a given story.

As a result of that data, Amedia is producing more stories that focus on issues of particular interest to women and stories that include or are more relevant to young people. That in turn has led to an increase in the number of young people who subscribe to its titles – a necessary development for sustainable subscription models, and a 13% margin on its latest annual results.

For traditional media companies like RBS, the transition from a legacy publisher with separate strategies for its newspaper and broadcast operations to a single digitally-focused company with an integrated strategy is a huge challenge. Petterle repeatedly stressed the need for a more agile team, with shared responsibilities to prevent bottlenecks: “We’ve merged… you can figure how difficult it is – and we’ve created a functional structure. We’ve divided the company among B2B operations, sales and advertising, and we’ve integrated completely…. And we’ve created a B2C operation. In the past we used to separate editorial and business.”

At Amedia the trick lies in convincing a variety of different newsrooms to accept that their values and Amedia’s values are the same, while allowing them access to the data that lets them create value for their readers. Nedregotten explained, “Since 2016 we’ve been working closely with our newsrooms… on leadership culture… on how to make the content more relevant to readers. We’ve tried merging newspapers, and it’s been an economic disaster every time we try to merge newsrooms. Working with our newsrooms, we’ve doubled readership of politics stories. Getting people to engage with the data is crucial, and it works.”