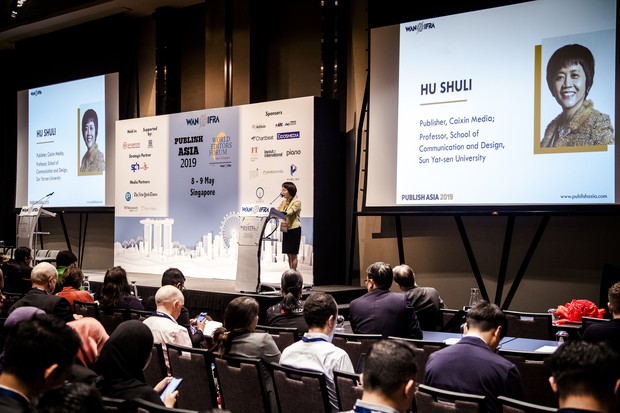 Hu is a lifelong journalist who founded the premiere Chinese business magazine, Caijing, and later the internet-focused journalism company, Caixin. She is currently the publisher of Caixin Media and a professor at Sun Yat-sen University.

She is known for pushing journalistic boundaries in the country with high-profile, high-impact reports and has been celebrated by other journalistic organisations worldwide.

“Our profession is going through a difficult period right now,” Hu said. “Our old, very successful business model which depended on advertising, doesn’t work anymore. But while searching for a new business model, don’t give up on our core mission. It’s our core competitive advantage.”

To illustrate a way forward, Hu described the evolution of Caixin during its nearly 10 years in business.

She acknowledged that Caixin did have one significant advantage — it started with a clean slate and didn’t have legacy operations to cover. Still, Caixin had to adapt its business approach several times to market changes.

For example, ad revenue dried up. It fell 20 percent per year for several years, Hu said, causing Caixin to fall from breaking even to a losing performance. A key response was to push hard on getting people to pay directly for quality journalism through subscriptions.

By end of 2018, one year after the implementation of a paywall, she said subscription revenue grew by 2,000 percent, with a couple hundred thousand paid subscribers. Reader revenue now accounts for 50 percent of the company’s total income. Not only are the numbers good, Hu said, but “closer interaction with readers helped us to do our jobs better.”

After subscriptions, Hu said live conferences have been a significant contributor to the company’s business. She said bringing people together can yield not only revenue but also create opportunities for news and for influence.

Other opportunities that companies should seriously consider are investing in mobile and apps, starting a related think tank, and move into data-related services.

However, no matter what business model choices are made, Hu said, the core mission of high-quality journalism must be preserved. If one holds on to that vision, tough decisions in tough times become somewhat easier. “Cuts in the newsroom?” she asked. “No.”

About the author: Bill Poorman is a freelance journalist, writer, podcast producer, and video producer, living in Singapore.