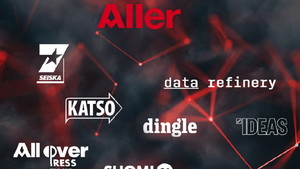 Aller Media Finland, whose mainstay for most of its existence has been weekly and monthly magazines, has undergone a remarkable transformation in about seven years’ time. (The company is part of the Aller Media group, based in Denmark and with other companies in Sweden and Norway.)

At the beginning of the current decade, Aller Media Finland’s financial situation began to reflect consumers’ migration away from print publications and toward digital media outlets and social media platforms.

For several years, the magazine publisher experienced a steady decline in revenue from consumer sales (subscriptions and newsstand sales) along with a slight decline in advertising revenue.

Thus the company faced a choice: become a digitally-oriented enterprise and re-establish itself as a competitor on the media market – and perhaps other markets as well – or face gradual but certain decline.

The company decided on a course of digital transformation and began implementing what we have designated as reactive and proactive strategies.

The strategies have so far proved successful. The company has restructured itself, leveraged its strengths in new ways, acquired new assets and conquered new markets.

all that while strengthening the remaining parts of its print business. It also has begun a profound and continuing culture change.

CEO Pauli Aalto-Setälä (in photo at left) says, “We have transformed ourselves from a magazine company to a diversified business group with a data agency and marketing companies, but we are still in the media business with our weekly magazines. So we are quite different than we were seven years ago when we started this transformation.”

Some seven years after beginning the process, about 40 percent of Aller Media Finland’s revenues come from digital operations, says Aalto-Setälä.

In a Q&A in the report, he describes why he expects that figure to plateau at 50 percent in five years’ time. In the media business unit, which is responsible for all B2C content, the figure is getting close to 30 percent, according to Director of Media Business Elina Schüller (a Q&A with Schüller also is included in the report).

Looking into the future, Aalto-Setälä says, “In five to 10 years, I strongly believe we will have even more digital platforms. The overall trend is toward platforms and technology, and we are building more meeting points where people can connect and be informed and entertained. I believe in a platform-based scenario for the future of our company.”

The report is available to WAN-IFRA Members for free downloading and can be purchased by non-members.