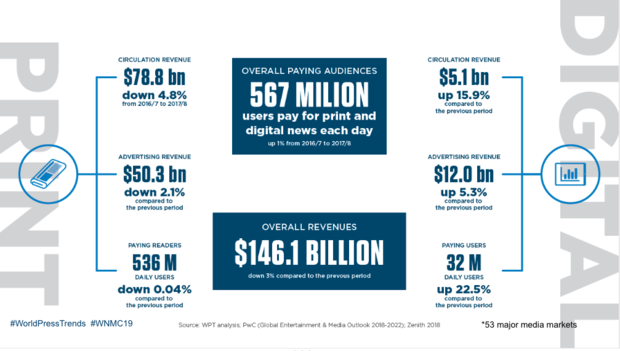 “The Law of Supply and Demand still applies,” says Nel, adding that readers are rediscovering that quality news is worth paying for. “News consumers are increasingly recognising that while information is plentiful in an increasingly digitally-connected world, independent, fact-based information that can be trusted is scarce.”

Nel will be speaking at Digital Media Africa 2019 in Johannesburg, South Africa, on 11-12 September, where he will be sharing insights from the latest edition of WAN-IFRA’s World Press Trends, which he is the editor of.

It is not just the readers who are realising the growing value of quality journalism – perspectives are also shifting among publishers. Nel says the observed growth is perhaps also a nod from readers to publishers who are showing a growing commitment to providing unique, quality content worth paying for.

“We’re seeing this even in the world’s most expensive country for mobile data, Zimbabwe, where paying mobile subscriptions to the Daily News and Financial Gazette are growing,” – François Nel

But this does not mean publishers have it easy now. As the digital media landscape continues to shift, where tomorrow’s revenues will come from should be a question at the forefront of any news organisation worrying about sustainability and new business models.

“Whatever else we know, this is true: we can’t simply replicate print-era business models in a digital context,” says Nel.

Low levels of trust in the media present an opportunity for those publishers building on credibility.

Nel says trust is something publishers must take seriously. He says tools like the Edelman Trust Barometer show significant differences in the confidence consumers have in the media in general, as opposed to their trust in journalists and specific news brands.

“Trust is an important issue,” he says, “and we need to be careful to unpick research that seeks to monitor consumer trust in the news media.”

“Innovative news providers who are serving their customers with relevant, timely and trusted news in formats that work for them are thriving, in context as varied as Burma and Belgium,” – François Nel

Are audiences choosing journalists over ‘the media’?

Nel points to the difference between trust in “the media” and trust in “journalists and newsbrands.”

This is evident, both in terms of Western political polarisation and its effect on the media, but also in Africa, where a number of countries head to the polls in 2019.

Nel says the media has two crucial mandates during election time in a democratic society. “One, to hold the politicians’ past performance and future pledges up to the light. And, two, to encourage citizens to participate in the process,” he says.

Recent reports by media monitors show that journalists across the continent are working hard to fulfil these mandates, resulting in increased confidence by news consumers. This, in turn, bodes well for new news revenues as audiences are kept engaged and informed, by a media industry that is fighting to show the worth of its currency and the value of credibility.

Click here for programme details and to register for Digital Media Africa 2019.