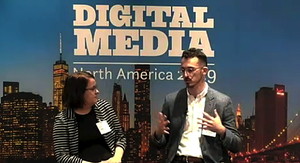 “We’re seeing a tremendous shift, where the business and the newsroom are serving the same customer – the reader. And I think it aligns the two really nicely in a way that makes innovation happen faster,” Andrew Phelps, the magazine’s Senior Director of Product, told participants at WAN-IFRA’s Digital Media North America conference in New York in June.

Originally an anti-slavery magazine, The Atlantic was founded in Boston in 1857 with the intention of being “intellectual, but still accessible,” he said. The magazine became popular nationally and has been through numerous changes during the past 160-plus years, including a move to Washington, D.C., where it is now based.

The path to a subscription model

“So here we are, once again reinventing ourselves, because we are on the path to launching a subscription model – a consumer revenue business, which means that really, for the first time in our history, the primary customer is not the advertiser. It’s the reader,” Phelps said.

A key way The Atlantic is managing this reinvention is by reorganising its staffing units. “We call them pods,” Phelps said, “which is to say there are teams of people who are self-sufficient and allowed to focus on specific problems without worrying about anyone getting in their way.

“The idea is that rather than having a web team and an iOS team and an Android team, which is more typical in a lot of organisations, we have a story-telling team and a home team, as in home screen or home page, and each of those teams has an editor lead, a developer lead, a designer lead, and a product lead,” he added.

Phelps said the pod system has helped erase formal delineations and reporting roles so that a more diverse group of people co-owns the same problems. That has been crucial to helping foster innovation within the company, he said.

“A developer will often have a great idea for a product, or a designer will have a great idea for a story. It gives some safety for those ideas to come out. I think this is where the most innovation happens, where you almost forget who came up with an idea or who owns an idea; it just was an organic process.”
– Andrew Phelps, Senior Director of Product, The Atlantic

He also said The Atlantic has been using new structures to speed up the innovation process. For example, Phelps said when he joined the magazine, his first project with his team was “an eight-week sprint” with the aim of coming up with one or two great features for subscribers.

“The first couple of weeks were spent just downloading everything we knew about our audience,” he said. “We had just completed a major audience study. We’d done a competitive analysis. We’d really studied what the organisation is good at.” Next, they spent about four weeks defining the problems they most wanted to solve. “This is the hardest part, and the most important part,” he said.

For example, Phelps said his group found that while The Atlantic does cover breaking news, it produces mainly magazine journalism, which is contemplative and analytical, so it wasn’t well equipped to win “the morning moment,” when so many news organisations are competing for attention from consumers. As a result, they started to ask themselves, “‘What do we need to do in the morning?'” he said.

“A lot of our work was coming up with these narrow hypotheses, informed by data. And the final part of this was taking these hypotheses and doing brainstorms and prototypes to help embrace the problems that were raised by these hypotheses. The idea was to either validate or invalidate what we thought would be true.”
– Andrew Phelps

Those brainstorms helped lead to some of the products that The Atlantic is developing for release later this year, he said.

The aim, he said, is to “bring some rigour to the process of what is ultimately a big, messy thing, which is brainstorming and product development, but also create space for people to come up with new ideas, to have time to think beyond business as usual, which we’ve all been focused on for so long.”

The Atlantic has found that a certain amount of structure remains essential. “If you can get a bunch of busy and smart people into a room for two hours, and say right at the top: ‘This is a narrow problem we want to solve: We want to help people who only have five minutes in the morning understand the news rather than just tell them the news. We want to orient them as to what’s happening in the world and we have one service, which is the smartphone. And we want to reach this particular audience, which is not subscribers, who are new to The Atlantic.’ That’s actually a lot of structure, but it allows people to fill the space with great ideas,” Phelps said.

“We call them ‘no-good-ideas-allowed brainstorms,’ which creates a certain freedom,” he added. “Believe me, I’ve heard some bad ideas, but in some of those bad ideas, you hear little threads that you can pick up and take back and keep refining, refining and refining.”

He also noted that The Atlantic has embraced the “jobs to be done framework,” popularised by Harvard Business School Professor Clay Christensen, “which is the idea that people have jobs they need done, and then they hire different products or services to do those jobs.”

Honing in on the reader’s needs

In trying to fulfill those desires, The Atlantic faces vast competition, he said – from not only other news organisations but also books, classes, conversations with friends, and many other sources.

“We have to really reorient what jobs we do, who our competitors are, and who else is vying for these jobs, which is a humbling experience. But it’s also a very clarifying experience because it allows us to get in the head of a user and ask, ‘What is the best thing we can do for this person in this moment?'”
– Andrew Phelps

“We’re still figuring this out, but it’s really reoriented our thinking,” he added. “We’ve had a long time to figure out how to do a magazine, but this is still pretty new. It’s all still messy and a work in progress, and probably will be for a while.”