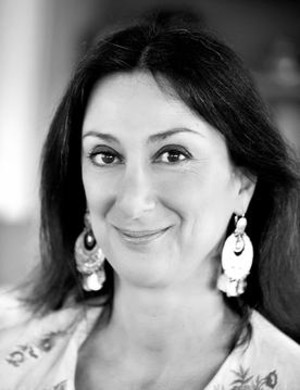 Ms Caruana Galizia, an investigative reporter known for exposing corruption in Malta, was travelling home from her office on 16 October 2017 when a huge explosion blew her car into several pieces and scattered debris off the road.

Following her murder, the Maltese authorities initiated criminal proceedings against the men who allegedly detonated the bomb that killed Ms Caruana Galizia as well as a parallel magisterial inquiry into whether others should be charged with criminal offences for commissioning the alleged assassins.

However, two years since her murder, progress in the investigation has been unacceptably slow and Maltese authorities have failed to meaningfully address any of the concerns raised by human rights groups. The overall environment for press freedom continues to decline, with a number of posthumous defamation cases still pending against Ms. Caruana Galizia as well as reports of attacks against her family, her supporters, and journalists who continue to investigate public interest stories on the island.

Despite welcoming a government announcement on 20 September 2019 to finally establish a public inquiry into whether Ms Caruana Galizia’s murder could have been prevented, guarantees remain lacking that would ensure an eventual inquiry is both fully independent and impartial.

“In lieu of a criminal investigation that results in the prosecution of both her murderers and the masterminds behind the attack, we call for the immediate establishment of an independent public inquiry that will finally bring answers regarding the death of Daphne Caruana Galizia,” said WAN-IFRA CEO, Vincent Peyrègne.“Malta must fulfil its obligations as a member state of the Council of Europe and urgently comply with the recommendations that have been made to ensure the impartiality and effectiveness of any such inquiry.”

Ms Caruana Galizia published her work on the Running Commentary blog. She was also part of the collaborative Panama Papers investigation and had been relentless at exposing corruption in Malta’s political circles – including Malta’s prime minister, Joseph Muscat, in a story connecting offshore companies linked to the sale of Maltese passports and payments from the government of Azerbaijan.

Prior to running her blog, Ms CaruanaGalizia worked for The Sunday Times of Malta and The Malta Independent. But it was Running Commentary that made her widely known, becoming one of the most read websites in Malta. Her hard-hitting journalism meant she was involved in a number of legal battles and in 2016, Politico named her as one of “28 people who are shaping, shaking and stirring Europe.”

“It is imperative that we see justice prevail for Daphne – Europe cannot fail her, or the courageous journalists who follow in her legacy, by allowing this heinous crime to stand,” said WAN-IFRA President, Fernando de Yarza Lopez-Madrazo. “Malta must live up to the ideals of the European project it is committed to, where journalists are free to hold the powerful to account and can carry out their essential roles in safety, with all the protections they should expect of a Union committed to upholding freedom of expression and the rule of law. There is no place anywhere for the assassination of a journalist, and Europe is no exception.”