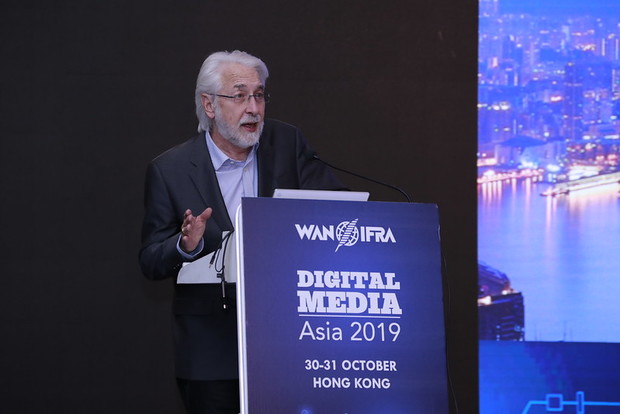 During the Digital Media Asia 2019 conference held in Hong Kong in October, tech giant Google reiterated its support for seeking an independent sustainability model for journalism.

Richard Gingras, Vice President for News at Google, said during the conference that the company’s support is closely connected to the popularity and purpose of Google Search, which he said helps support a “relevant and valued ecosystem of expression” on the web.

“Globally I think we’ve contributed as much if not more than any private entity towards the future of news,” Gingras said. “If you look at the success of our advertising tools, it’s based on the fact that we only make money when publishers make money on the open web.”

Gingras said the company drives 24 billion visits to news publishers each month, which they can use to build audiences and grow revenue from advertising and subscriptions. He added that Google also has provided advertising marketplace tools that sent publishers around US$14.5 billion.

Google’s new tools for publishers include more granular settings for text snippets whose length can be modified, the use of thumbnail images and their corresponding sizes, video previews, and site previews that are reflected in Google Search and Google News.

Gingras also mentioned that the company is paying closer attention to global regulations on the internet after the European Union passed the first amendment to its copyright law in 20 years in order to cover the internet.

The new law states “single words or very short extracts” of news stories will not require a license, but it is not clear on how much of a news article can be shown before it infringes on the rights of the publisher.

Gingras said Google has already moved to address this, since publishers earlier expressed their concern that previews on news results might be giving away the story.

“Currently, when we display news results, we show a headline, which links directly to the relevant news site. For most results, but not all, we also display a short preview of the article, such as a few lines of text or a thumbnail image,” Gingras said.

He added that not all search engine results include previews.

On the other hand, another area of regulation Gingras wanted to pay “very careful” attention to was that on misinformation.

“Yes, the misinformation problem is a significant one. But I’ve also seen well-intended, as well as not so well-intended, efforts in the regulatory sphere around the world to address misinformation legally. And unfortunately in all too many cases, there are secondary consequences that dramatically impact free expression,” he said.

No payments under the table

Gingras also dismissed the “inaccurate perception” that people or firms could purchase search result placements on the Google Search engine.

“Google’s users trust us – and we see this in research – because they perceive us to be principled and fair and equitable in connecting them with the work of this diverse array of publishers and journalists,” he said.

He said Google does not accept payment from anyone for inclusion in search results.

“We sell ads, not search results, and every ad on Google is clearly marked and set apart from the actual search results,” he said. “When users come to Google we sort through all of those – the thousands, indeed millions, of instances of online journalism focused on a particular topic, in the quest of giving users the best information based on the relevance of the results to their search query.”

Author Chad de Guzman is a Filipino student journalist from Hong Kong Baptist University, and a scholar of the university’s Master of Arts in International Journalism Studies program.