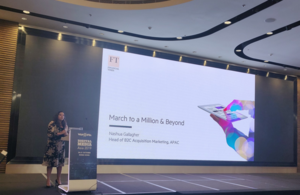 Gallagher, head of the FT’s B2C Acquisition Marketing, Asia Pacific said that two-thirds of those paying readers are outside of the UK, with 80 percent being digital subscribers.

The FT now earns 65 percent of its revenue from content. Content revenue first exceeded advertising in 2014. Compare those statistics to 1989, when circulation was 290,000, mostly in the UK and with most income coming from advertising.

“Having a face-to-face conversation with a customer is valuable, and we found that our customers are incredibly diverse. We moved from demographic targeting to more value based,” – Nashua Gallagher

Digital transformation has reshaped the fashion in which journalism has been practiced, with the digital revolution attracting the audience and tech innovation situating the news media in an enviable position.

“The goal of quality journalism is to engage our readers. Page views alone have very little to do with engagement,” Gallagher said.

Rather, prioritising engagement and understanding their audience, as well as content goals, were critical to reaching their million subscriber goal, she said.

To better understand the consumption and dissemination of readers content, tracking and measuring engagement are crucial steps. This is how publishers can identify readers’ habits, perceptions and motivations, Gallagher said.

But perhaps most importantly, said Gallager, publishers who want to grow their subscription base have to be willing to accept change, transformation and disruption.

“The genesis of disruption is a good thing, is a force and not a story,” Gallagher said.

Disruptive business innovation created a new market and new value, she added. This ultimately throws into disarray an existing market, but the resulting products outsell the competition.

Even though the Financial Times has had success, Gallagher said publishers still need to constantly focus on to what extent independent journalism can thrive without financial independence.

“We don’t influence anything that comes out of the newsroom. The news direction is set by the editors. Commercial is what we do,” she said.

Author Malick Gai is a freelance journalist and undergraduate student at the School of Communication at Hong Kong Baptist University.