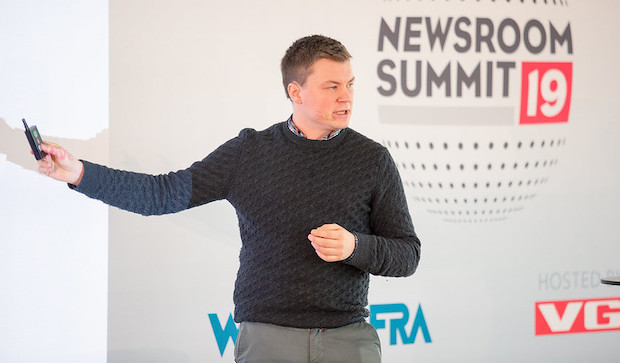 With more than 70 news titles in the group, Amedia first introduced a paywall model in 2014. Today, some 60 to 70 percent of their online articles are locked for subscribers only.

Many other publishers have looked on with envy as Amedia’s subscription numbers returned to growth, in part driven by new initiatives such livestreaming local sport.

But when Amedia looked into audience data, they found that their readership skewed 60 percent male. It’s also an ageing audience, with a 50 percent chance that people older than 80 years subscribe to one of Amedia’s titles, compared to only 9 percent among 30 to 39-year-olds.

With this in mind, the group has been focusing on reaching more women and younger audiences, and found some interesting correlations between sources and readership.

The relationship between relevance and readership

“You tend to look at topic, but it is not necessarily a question about topic,” said Jostein Larsen Østring, Amedia’s Vice President for Development, during WAN-IFRA’s recent Newsroom Summit conference. “It’s a question about relevance.”

In practice, this seems to suggest that people are more likely to read a story if they find themselves reflected in it.

Using natural language processing techniques, Amedia conducted an analysis of some 660,000 stories from 64 newspapers published over a 21-month window, which revealed that, on average, only 34 percent of names mentioned in a story were female.

In addition, an analysis of the stories from 19 newspapers over the same 21-month period showed that publications which featured more stories containing women sources had higher readership among women, supporting Amedia’s hypothesis that better gender representation makes business sense.

The group arrived at a similar conclusion with regards to subscriber age. Østring said they found that the age of the person they interview for a story often correlates well with who is reading it.

Using subscriber data from newspaper Bergensavisen as an example, Østring highlighted the importance of making relevant content available to people with different interests.

On the particular day he was referring to, the most-read story was about parents not wanting to spend their free evenings collecting money for the sports team, which performed particularly well among 35 to 44-year-olds.

“Almost 13,000 subscribers read something, but not all read the same story,” Østring said.

“There isn’t one story that is going to save you today, nor two or three. If you’re going to be interesting for those different subscribers you have to have different kinds of content every day.”

Geography also acts as a strong indicator of who is going to find a story interesting, with some of Amedia’s newsrooms closely following the different geographical regions they cover via dashboards, which show the percentage of readers from different locations that read at least one article for 10 seconds.

“We do a lot of research and analysis but most of the time we spend talking to editors about what we can do about it,” Østring said.

“You should accept that it matters who you are interviewing, and you should involve the whole newsroom. Another key point is to find out what to do less of. You have to de-prioritise if you’re going to prioritise.”

Amedia hit its all-time subscriber low in 2015, with 455,000 subscribers. A year later, the group presented the 30 largest newsrooms with a new editorial strategy, with the goal of measuring newsrooms’ performance among readers, understanding them better, and establishing new KPIs. One of the most important ones is how many subscribers spend a minimum of 10 seconds on at least one paywalled article.

By 2018, Amedia had reached close to 540,000 subscribers, with digital growth compensating for the print decline of about 7 to 8 percent per year.

“We know one thing, which is that readership counts the most when it comes to keeping subscribers,” Østring said.

“We are more focused on readership than sales.”