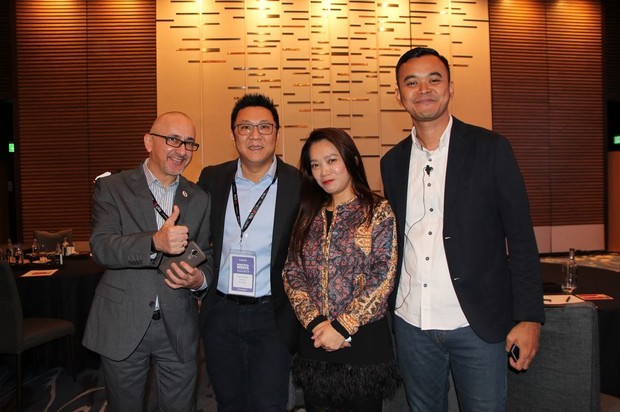 The three speakers and the session moderator after the end of the panel. From the left: Andreas Vogiatzakis, Victor Cheng, VP for North Asia, comScore (moderator), Chia Ting Ting and Danto Dewanto.

“Nobody wants their brand image tainted or associated with the wrong sort of message or context,” said Andreas Vogiatzakis, Group CEO of the Star Media Group. “But what can publishers and brands do to stay safe?”

Vogiatzakis, who had been an advertising industry veteran for over 20 years before he took the helm of Star Media Group, started by describing an ‘unsafe environment’ for brands. There are certain problematic categories of content that the advertising industry calls the “Dirty Dozen” – among them are hate speech, terrorism and illegal drug use. The key to maintaining brand safety is assuring that the brand will not be associated with such content.

“Investment in software services that provide a filter and extensive quality metrics to ensure ads appear within a safe environment is of paramount importance. I can’t stress that enough,” said Vogiatzakis.

“At the end of the day, trust is everything,” Vogiatzakis said.

One of the most potent threats to brand safety, Vogiatzakis stressed, is ‘deepfake’, the latest technology that allows the superimposition of elements of one video over another.

“We have gotten to the point where even videos can no longer be trusted,” he said. “In a world where a single malicious rumour can ruin public confidence in a brand,” he added, “a video can do even more harm.”

People may ask: What’s the role of publishers in creating brand safe environments? Vogiatzakis has a firm stance on the issue. He believes that dealing with threats to the brands’ safety shouldn’t be left to only them.

“As publishers, we have a critical role to play to reinforce a brand-safe environment for readers and for brands,” Vogiatzakis concluded.

Advertising is facing numerous issues: from scams to fake content and advertisement misplacement. But one of the most rampant problems is fraud by far, according to Chia Ting Ting, Chief Commercial Officer and Head of Advertising of the Malaysiakini Group.

In an era where anybody can post anything online, how can we protect the reputation and finances of a brand?

According to Chia, fraud is the second most important reason for marketers not buying advertisements programmatically. Oftentimes, people try to sell items that don’t even exist. To prevent this, some companies send media salespeople to verify an ad personally before it is put up on a website.

“It’s the protection of the consumer, the reader,” she said.

Ultimately, these issues generate a demand for deeper customer insight and a shift to interactive-engagement content and community-based marketing.

In response to this issue, Malaysiakini created the Kini News Lab, a programme which utilises a combination of journalism, technology and data. The goal is to collect insight data, including reader preferences, opinions and demographics. The Kini Lab achieves this by engaging the reader on a deeper level, with quizzes, games and visual presentation of complex data.

Is this the next big step in digital marketing and advertising? At this point in time, possibly. But Chia sees even more advancements down the road. She sees the most promise in voice-enabled, advisory-based ads tailored to the customer’s needs. “This is the future,” she remarked.

Let me tell you a story

“Storytelling is about a relationship,” said Danto Dewanto, VP Sales and Marketing at Diginusantara. The relationship between a brand and a consumer is an important one – the more personal it feels, the more revenue the brand will obtain.

But how does one move from storytelling to storyselling?

Some brands such as Coca-Cola are masters at creating a persona that will appeal to consumers worldwide. The key, Dewanto said, is to strike a good balance between providing the customer with enough data and crafting a good story in your advertising campaign.

Dewanto shared his own experience creating an anti-smoking campaign. After analysing the data, Diginusantara decided not to target the smokers directly. Instead, they produced content related to the passive smokers in their environment. The campaign trended on Indonesian social media and in national media. “This is how we craft the story and share it with the audience,” Dewanto said.