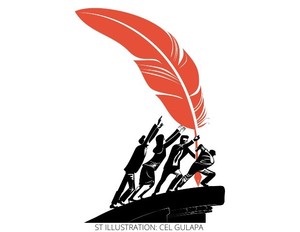 A long line had formed, snaking for several blocks. Sullen, anxious, freezing amid the winter winds, laden with luggage and children, these unfortunate people were waiting for a bus to the Charles de Gaulle airport in Paris.

With transport workers on strike across France, and rail and metro services severely disrupted, this was the only affordable mode of transport, given the surge pricing of ride-hailing services and a shortage of cabs.

As I struggled past the crowd, I could not help but feel sorry for these unfortunate folk, caught in the wrong place and time, collateral damage in an industrial action called by French unions to block government plans to reform the country’s generous and convulted pension programmes.

At the back of my mind was also the question of how my wife and I were going to get out of the city before further escalation of the strike, as union leaders had promised in the weeks ahead, to press their case.

There had been fighting words on all sides. French Prime Minister Edouard Philippe had told the national assembly that his government would not relent on the reforms. My determination, and that of the government… is total,” he declared.

Not surprisingly, this sparked an equally robust response from union chief Philippe Martinez, the general secretary of the powerful and hardline CGT union. “We’re hearing so much bull****… ever since Emmanuel Macron arrived, he’s done nothing except to divide our citizens. It’s scandalous,” he snapped back, signalling no let-up in the protests even as the Christmas holidays loomed.

So the days ahead looked grim.

Warren FernandezI had come to Paris to attend the board meeting of the World Editors Forum (WEF), the global network of editors, which I chair.

Despite the transport chaos, we had decided to proceed as scheduled, with some last-minute changes in the programme.

We moved our meetings to venues we could get to on foot from our hotels. Thanks to a show of solidarity by French media group, Les Echos Le Parisien, which kindly opened its offices for our use, we managed to just get on with the job sans frills, regardless of the circumstances, just as so many good journalists do time and again in the newsrooms we lead around the world.

As dramatic news events unfolded in the world around us around us my colleagues and I focused our minds on how to address the many challenges we were facing in our newsrooms.

We swapped notes on the dire situation in places like Brazil, Mexico, Pakistan and India, where the media is under increasing pressure from political leaders not averse to playing up populist sentiments, sometimes deliberately taunting or turning against the messengers when they did not like the message, but mostly for electoral effect.

Political polarisation was also intensifying in some democratic countries, split along class or ideological lines, with economic challenges turning into social and partisan divides.

In the aftermath of the most divisive election campaign that Britain has seen in decades, colleagues from newsrooms there lamented how the media and voters had been manipulated and misled, not just allegedly by foreign players out to influence the outcome, but by the very political parties that were contesting to form the government.

The role of trusted voices – objective and reliable editors, reporters and news organisations – was thus all the more important, to help voters make sense of the welter of claims and counterclaims, information and misinformation, as one editor noted, to general agreement.

There were hopeful reports too. From our colleagues in Norway, Finland and Germany, we learnt that the proliferation of “fake news,” as well as the information overload arising from rapid and relentless technological disruption, was fuelling a desire among audiences for authoritative reports and commentaries to help them make sense of it all.

Several editors noted a growth in subscriptions, especially for digital products, with revenues from these helping to make up for the inexorable downward drift in print circulations and advertising revenues.

From Portugal, we heard how the information minister had recently stepped up and convened a meeting of news organisations and other stakeholders, to consider ways to restructure the media industry.

The aim: to ensure that society continues to be well served with the credible and reliable information so essential if democracy is to survive and financial markets to thrive. Simply leaving this to the free market, and expecting business as usual to deliver the public good of quality journalism, was deemed as dangerous wishful thinking.

Amid the growing polarisation of societies – with widening divides along income, class, ethnic and national lines – the media has the added responsibility of clarifying issues, establishing facts, countering falsehoods, and hopefully helping to forge some sense of consensus on the collective way forward, on matters as real and pressing as income inequality, climate change, gender disparities, nationalist and nativist pressures, and the strategic rivalry between China and the US.

To try to live up to the task, WEF editors pledged to work together to tackle our own challenges – recruiting and retaining talented journalists, training and skilling up our newsrooms, finding new ways to engage with and serve our readers – even as we resolved to collectively mark World News Day on Sept 28, when we will bring together newsrooms across the world to showcase the vital importance that professional news organisations play in serving our communities at this time of disruption and change.

Coming in from the north-west, I watched on the flight tracker as the plane made its way down the coast of peninsular Malaysia, then took a sharp left turn to hover over the Riau archipelago, Karimun and the islands called Durian, Sugi Batam and Bintan, before another deft turn that brought Singapore into sight.

Then, the plane descended quickly to Changi Airport and its wheels touched down. Truly, it felt good to be home, in safe and secure Singapore. After wrapping up our meetings, I had braved the crowds and traffic mayhem to catch a flight out of Paris on Monday evening, the day before the strike flared up and turned violent in some parts of France.

But alas, just as we landed, a voice overhead warned that the forecast in Singapore was not exactly for sunny skies ahead.

“Please fasten your seat belts; some turbulence ahead,” the pilot had intoned during the long flight.

With the economy in the doldrums, roiled by US-China tensions over trade – on hold for now but unlikely to dissipate entirely any time soon – the fallout from the impeachment of the US President, the rush to implement Brexit early next year and, closer to home, the bitter political wrangling over who will be the next prime minister in Malaysia, all signs point to a bumpy ride ahead.

As a small, open economy, subject to the ebb and flow of global currents, Singapore will inevitably be shaken and swayed as these events play out in the months to come.

Meanwhile, on the home front, a crucial election looms, with leadership transition on the cards, and what seems to be shaping up to be a bruising battle at the polls.

So, as we hovered in the sky, these questions came to mind: Will Singapore succumb to the polarisation seen elsewhere, with political players ready and willing to exploit economic and social divides for electoral gain, drawing on tactics and playbooks that seem to have paid political dividends, regardless of the social cost?

Might the nativist tendencies that have split so many countries, with populists fuelling fears over immigration, playing up ethnic and religious divisions, or whipping up anti-elite sentiments, also emerge here in the heat of the hustings, when emotion might trump reason, even among a usually sober and pragmatic electorate?

And just how would it heal the rifts that ensue if that happens, given how protests in places like Hong Kong and Paris are leaving deeply wounded societies in their wake?

Already, there are troubling signs of how some of these concerns might play out, so indeed, it would be wise to brace ourselves for some turbulence ahead.

At testing times like this, I often turn to wiser souls for insights and comfort, and so I offer you, dear reader, these words from A Psalm Of Life by American poet Henry Wadsworth Longfellow, as a little seasonal gift, with my warm wishes for the year ahead, come what may.

Tell me not, in mournful numbers,

Life is but an empty dream!

For the soul is dead that slumbers,

And things are not what they seem.

Life is real! Life is earnest!

And the grave is not its goal;

Dust thou art, to dust returnest,

Was not spoken of the soul.

Not enjoyment, and not sorrow,

Is our destined end or way;

But to act, that each to-morrow

Find us farther than to-day.

Art is long, and Time is fleeting,

And our hearts, though stout and brave,

Funeral marches to the grave.

In the world’s broad field of battle,

In the bivouac of Life,

Be a hero in the strife!

Let the dead Past bury its dead!

Act, – act in the living Present!

Heart within, and God o’erhead!

Lives of great men all remind us

We can make our lives sublime,

And, departing, leave behind us

Footprints on the sands of time;

Footprints, that perhaps another,

A forlorn and shipwrecked brother,

Let us, then, be up and doing,

With a heart for any fate;

Learn to labour and to wait.