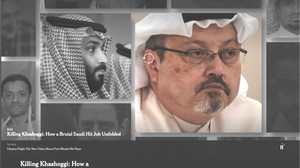 For example, the eight-and-a-half minute report entitled “Killing Khashoggi: How a Brutal Saudi Hit Job Unfolded” uses a combination of still photos, video clips from a wide variety of sources (including numerous surveillance cameras), animations, and satellite maps to document the events surrounding the murder, from the run-up and preparation through the cover-up attempt.

Recent reports in the series, which is freely accessible by non-subscribers, include these:

The series has garnered a Pulitzer finalist citation, two News and Documentary Emmys, an Overseas Press Club of America Award and a Robert Kennedy Human Rights Award. After it won the Best Use of Online Video category in the 2019 World Digital Media Awards (one judge called it “a stellar example of digital video reporting at its best”), we caught up with Browne by phone last autumn to get a look behind the scenes.

“Social journalism” – but taken much deeper

Launched in April 2017, Visual Investigations represents an evolution of what was called “social journalism” around that time as it applied to breaking news and trending stories. Browne had worked at the social media news agencies Storyful and Reported.ly (Storyful evolved into a service agency for publishers and was acquired by News Corp in 2013. Reported.ly, sponsored by First Look Media, ceased operations in 2016.)

Other precursors included several groups in the fields of human rights and technology that have pioneered advanced investigation techniques:
– Witness;
– Human Rights Watch and Amnesty International, innovators in the use of satellite imagery and other visual evidence;
– SITU and Forensic Architecture, specialists in 3-D and timeline reconstructions;
– Storyful and Bellingcat, which developed standards for verifying social content and open source intelligence (OSINT) investigations; and
– graphics departments in various newsrooms.

He explains, “At Storyful, we used the social web to detect a signal for news events that we could look into and we could report on using social media. We built a verification practice for imagery and video that was coming out of the Arab Spring, for instance, or Utøya [the Norwegian island where a right-wing extremist murdered 69 people], or any extreme weather events. And in the course of doing that work in a breaking news scenario, there were obviously instances where a deeper dive was warranted.

“Or we were spotting a pattern, for instance. … When you’re listening to communities and citizens who are documenting conflicts in their daily lives, you can detect those types of patterns emerging – when you’re really listening and paying attention to it over time. That was the early idea for this type of investigative work,” he continues.

At his next job, as managing editor of Reported.ly, Browne took the concept a few steps deeper. His most prominent investigation exposed the export of weapons from Italy to Saudi Arabia, which used them to bomb civilian targets in Yemen. That exposé – followed by a deeper investigation he undertook with Barbara Marcolini at The Times – triggered public outrage in Italy and caused the government to stop the shipments. “That was a mix of traditional reporting plus social media content gathering and verification, and then also identifying weapons and weapons remains, and using ship trackers,” he says.

At the Times, Browne worked with executive editors Mark Scheffler and Nancy Gauss to build the Visual Investigations team from scratch. The first piece in the series documented a chemical weapons attack on the town of Khan Shaykhun, Syria, which the Syrian government denied conducting. Since that report, the team has done more than 50 reports, including follow-ups in some cases when significant new evidence turns up.

“I suppose the thing that connects all of these is the use of visual evidence,” Browne says. “We can analyze it in a way to extract information that might not be immediately obvious…. What I mean is, if there is an air strike somewhere, for instance, and we know where it happens and we have ‘before’ and ‘after’ satellite imagery, we can see if there are new strike holes, or there are new holes in the buildings, and that can establish a kind of a timeframe of when something happened.”

Geolocation can help establish where an event occurred. In addition, “you can sometimes analyze the damage that’s caused… to establish how something happens as well. We collect a lot of visual evidence, analyze it and then do more reporting,” says Browne.

Some reports require only a week or two to research, report and produce, but most of them take one to two months, and some take even longer. “We did a deep investigation into the killing of a medic in Gaza during protests last year and we were able to, using a 3-D reconstruction, retrace the path of that bullet. That one took about six months,” Browne says.

In addition to time and effort, producing the reports often means watching graphic video footage of human suffering. “We take measures to make sure that we don’t overexpose ourselves to these traumatic stories,” says Browne.

How does Visual Investigations contribute to improving life in the global village? “First of all, at a minimum, you’re creating awareness of these stories and shining a spotlight on abuses that otherwise might go unnoticed,” Browne says. “Secondly, we get a lot of feedback from the communities that we are reporting on, or the communities that are affected by these events. So you’re representing people who often don’t have a voice, particularly in countries where there are autocrats in power or police states.”

The reports often affect public policy, directly or indirectly. “For instance, a story about the Nigerian military shooting protesters [screenshot above] created a lot of interest amongst the journalism community in Nigeria. That forced a government inquiry into what happened,” he says. The story about the Gaza killing forced a criminal investigation in Israel and influenced the United Nations investigation into the event, to cite another example. And closer to the Times’ base, reporting on the killing of a teenager during a surge in gang violence in the Bronx uncovered additional video evidence that the police used to convict the boy’s murderers.

“Although this is a new form of journalism, it is rooted in the traditions of journalism – so it may seem sort of innovative and fancy, but it can have real impact,” says Browne.

Magnifying the the series’ impact well beyond its presence on the Times website is the Visual Investigations playlist on YouTube. The most-watched report, about a gunman who killed 59 people (including himself) in Las Vegas in 2017, has registered 16.8 million views on that platform. “Of course on YouTube, there’s a real community aspect to it, so we find people recognizing them as a distinct type of report. We make an effort at really engaging with that community, answering their questions and updating them when there’s a development on the story, using community posts,” says Browne. He says the audience on YouTube tends to be more international and younger than the audience on the paper’s site.

“We’re conscious that there are lots of different audiences for us to reach with this type of work, so we’re trying to be creative about that too,” Browne says. Despite the emphasis on sophisticated video techniques, the printed paper has not been neglected.

“We’re also printing the reports. We’ve learned how to ‘print’ a video. We’ve worked with our graphics team and the print designers to lay out the evidence that we’re collecting in these stories.”
– Malachy Browne, Senior Story Producer, Visual Investigations

“We’ll write an article with it, and it might be a full-page spread or a double-page spread,” he says.

In print as well as online, “We’ve seen people saying [the series] is a reason for them to subscribe. That’s the ultimate compliment,” says Browne. Of course, since we are talking about The New York Times, the compliment must be shared among a substantial number of people involved in research, reporting and production.

The Visual Investigations team consists of what Browne calls “open source reporters,” who are adept at finding and verifying evidence and information from across the social web – but that’s just the beginning. Team members’ other skills include decoding web pages, geolocating videos, working with large spreadsheets of data, and interpreting flight-tracker and shipping information.

Aside from Browne, a native of Ireland who worked as a computer programmer before entering journalism in 2006, these people comprised the Visual Investigations team as of March last year:

These people had joined the team by the time of our interview with Browne in October:

“It’s a mix of traditional human-rights and online investigators, which is a good complement,” says Browne. The team is part of the Times’ video unit, so the team members work with video editors and a motion graphics editor as needed. If the story will be published in a more traditional format, they work with a graphics reporter or producer. “Then from project to project we have the benefit of being in a big organization with terrific reporters around the world and a great network of sources and other reporters, freelance reporters. So we’ll often team up with those people,” Browne says.