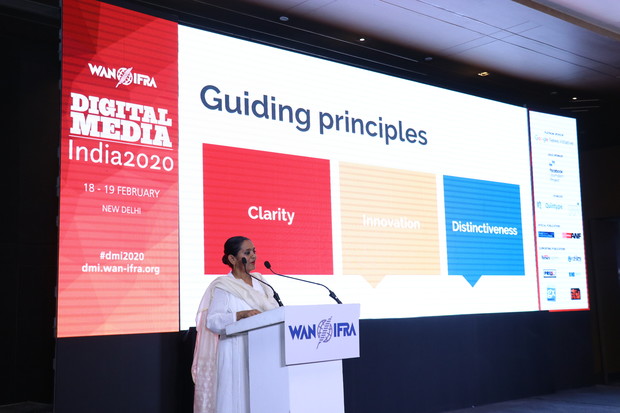 The conference, with the theme ‘Growing Big in Digital’, covered a range of news publishing topics, such as digital and programmatic advertising, video and OTT space in India, subscription strategies and transformation.

The first day of the conference covered digital advertising and alternate revenue sources for the news media business, addressing how a publisher can drive their business to profitability. Gone are the days when the biggest revenue source of a media house was advertising revenue. Partnerships and alliances between publishers are the new normal; as are content syndication, e-commerce, podcasts, sponsorship and events.

Juan Señor, president of the Innovation Media Consulting Group, presented 14 business models and a single strategy to transform a newsroom into a reader-first model. This strategy is based on the Innovation in News Media World Report 2019. “A newsroom should deliver content worth paying for. Everything that generates value should generate revenue,” he said.

Puneet Gupt, COO of Times Internet Ltd., urged publishers to find out what content readers are willing to pay for. “Once you’ve figured that, create resources to provide that content to the reader. Quality of revenue should be a factor in deciding how a news media company monetises. A brand must consider ‘direct sales vs programmatic sales’, ‘brand solutions vs standard advertisements,’ ‘reader revenue vs advertising revenue,’ and ‘revenue from syndication vs on-site revenue’” he said.

“As far as paying for content is concerned, Indian media has given away far too much for far too long for far too little. There is a sense of entitlement among consumers that media has to be free.”
– Navaneeth L, CEO of The Hindu

Day 1 of the conference closed with the presentation of the South Asian Digital Media Awards, which saw more than 80 entries from more than 20 media companies. An international jury chose 34 winners for the fifth edition of the awards. Manorama Online bagged an award for the Best News Website, while BBC India won the Best Data Visualisation award.

The second day of the conference covered the road ahead for digital journalism and explored whether digital content is a bubble waiting to burst. Siddharth Varadarajan, Founding Editor of The Wire, said the field has a rich future. “A lot of growth is still possible in digital journalism, specially since the source of credible content is drying up,” he said.

Rupa Jha, Head of Indian Languages at the BBC, spoke of video becoming a major content consumed on digital media. “India is high on video consumption. The way ahead will be videos on investigative stories, experimentation with technology, and collaborating with independent studios and people in business,” Jha said. “Having data to guide our content strategy is very important,” she added.

The conference also covered the over-the-top (OTT) scenario in South Asia and the threats, challenges and opportunities that accompany online streaming in the region. The Indian media market currently hosts more than 30 OTT players. The country is expected to overtake South Korea in the next five years to become the world’s eighth biggest OTT player.

The conference ended with a conversation between Navaneeth L, CEO of The Hindu, and Ritu Kapur, co-founder and CEO of Quintillion Media. According to a KPMG survey, by 2030 the digital consumer is going to be non-English speaking, a mobile-phone user and increasingly willing to pay for content online.

“The consumption of regional news is far higher than the consumption of English news in India,” Navaneeth said. “India is largely a mobile-first market. As far as paying for content is concerned, Indian media has given away far too much for far too long for far too little. There is a sense of entitlement among consumers that media has to be free.”