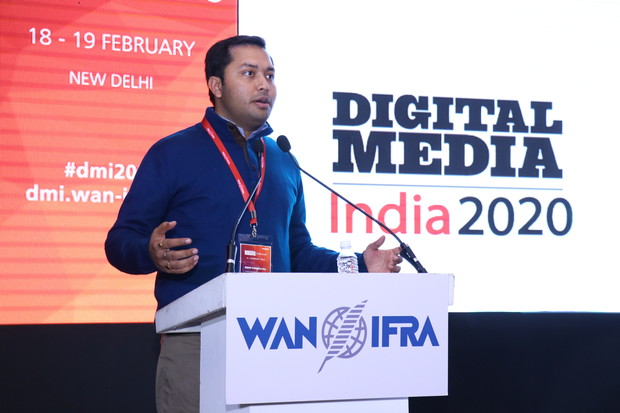 The trio began its entrepreneurial journey with TLabs incubator in 2013, followed by a seed round from Times Internet and a group of angel investors including Flipkart founders Sachin and Binny Bansal.

In 2015, Inshorts, which delivers snappy news summaries in 60 words, raised Rs 25 crore (approximately $3.4 million) in a Series A round from Tiger Global and Rebright Partners. Four months later, it raised Rs 127 crore (about $17.5 million) in Series B led by Tiger Global.

Today, Inshorts is India’s highest-rated news application with more than 15 million downloads both on Android and IOS.

Through the years, the digital space has been witness to an onslaught of tech-driven disruptions such as Artificial Intelligence (AI) and Machine Learning (ML) driven feeds, wireless technology such as WiFi, 4G and 5G, radio waves and optic fibers, easily overwhelming the traditional news space.

Contrary to popular perception, technology has only enabled these disruptions in the media sector, and not caused them.

The biggest disruptions are form-factors such as email-newsletters, social media posts, news hour debates and the daily newspaper deck. The format and user interface that works for print media differs drastically from what works for digital, broadcast, social media or the radio.

In addition to being a co-founder of Inshorts, Deepit Purkayastha is also Inshorts Chief Strategy Officer and oversees the business and strategic roadmap of the enterprise.

“Media houses must remember to use platform-specific form factors, which is what InShorts capitalised on,” he said.

“Once technology and form factor begin working harmoniously, only then can a publisher leverage that disruptive force. When Inshorts was launched 6 years ago, most media companies took print content and dumped it on a website, resulting in an overwhelming consumer experience,” Purkayastha said.

India is the second largest global smartphone market, behind China and ahead of the United States.

In 2019, adults spent an average of 1 hour 29 minutes per day on digital platforms, according to a research by eMarketer. In the past two years, the average digital consumption in India has seen 2X growth, as per a BCG-CII report.

In 2013, when the company was launched, India had not yet witnessed the smartphone boom. Data was expensive, existing aggregators had not innovated on form factor, and smartphones were running on 2G connections.

“This resulted in costly video consumption, and a cluttered run-off-the-mill list of collated articles. This was our first hook,” Purkayastha said. “Most of our peers were passive news readers because of unsuccessful form factors. Their main source of content consumption was Facebook because the other sources were overwhelming to consume on the smartphone.”

Today, the first point of news access for 500 million Indians, with data costs as low as Rs 18.5 ($0.26) per GB, is the smartphone with inexpensive 4G internet.

InShorts’ form factor are single screen cards comprising a headline, an image and a crisp summary. These cards can be navigated by swiping and are editorially curated with AI-driven personalisation.

The company was clear in its motive to not burden a consumer with information. While Inshorts registers users across age groups, its most active users are in the 20-30 age bracket.

“People, especially young adults, don’t have time, and have a sea of content to choose from. This is where artificial intelligence fit into our product experience,” – Deepit Purkayastha, co-founder, Inshorts

Parsing of data and content summarisation has proven to be one of the biggest challenges of AI and machine learning.

Another hurdle that faces a completely AI-driven news product is the possibility of consumers getting segregated into buckets, reading news that they are comfortable with, and not stepping out of their echo chambers.

What works best for Inshorts is striking a balance between AI and editorial inputs.

An AI-backed algorithm called Rapid60 automatically condenses a news article into a 60-word brief. The algorithm is born out of analysing a database of more than half a million articles summarised by Inshorts editors during a five-year period and can summarise more than 100K articles per month.

Inshorts produces multiple story cards each day. The 20 percent most read content on the app, which brings in the lion’s share of clicks, is still entirely editorially curated and trumps the click-through rate of the 80 percent AI-driven content.

How a story will be pushed out to the audience is based on a rating system ranging from 0 to 1000. It predicts reader interests based on time spent by them on each news card, and then marries the two with AI.

“If an editor rates a story 1000, it will be pushed out to the audience, irrespective of their chosen interests,” Purkayastha said.

“A swiping card system will always translate to more clicks, compared to a list of links, which naturally tends to lean towards clickbait, decreasing the time spent per article.” – Deepit Purkayastha, co-founder, Inshorts

Although the brand’s single screen summaries don’t grab as many eyeballs as a clickbait headline would, the comparative average time spent on an Inshorts story is 4-5 times.

“Form factor influences algorithms more than we realise. One should take a call on the form factor, understand its biases and only then deploy AI as a subservient tool to achieve the company goal,” Purkayastha said.

Inshorts primary source of monetisation is advertising through B2B channels.

The company produces about 1,000 shorts per day and an Inshorts consumer spends an average 12 minutes a day and manages to consume almost 86 shorts.

The company regularly collaborates with brands such as Uber, Airtel and Netflix for advertising, which makes for the lion’s share of the revenue pie. The nature of the advertisement is non-invasive, skippable and appears exactly how a story card would, and has a native advertising feel to it.

Swipeable adsAdvertisers can share their ads to Inshort’s reader base in 60 words along with an embedded image or video. The ads do not involve mandatory engagement and are listed as “Powered by” along with the advertiser’s name.

The engagement the company sees on these sponsored shorts is much higher compared to the traditional interstitial ad format (ads designed to be placed between content), resulting in advertisers being willing to pay higher rates.

“The power of form factor is so strong that it can act as a self-sufficient PR tool. Public was able to generate 50,000 downloads entirely organically without celebrity endorsements or campaigning.”

The company wants to actively use AI/ML and image processing to moderate “Public,” which is already seeing more than a million unique videos per month by users across India.

Ambient interface innovationsInshorts is also planning to come up with new interactive forms of delivering news such as graphic cards, collections factoids. The company already collaborates with Ipsos (a global market research firm based in Paris) for polls.

“Our typical poll gets about 4 lakh [400,000] responders in a single day. We realise the huge ground of resources we’re sitting on, and we intend to make full use of it this year,” Purkayastha said.