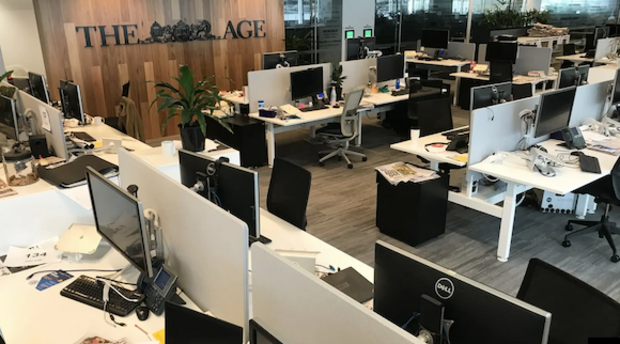 The extraordinary changes brought about by Covid-19 have brought with them “lots of uncertainty and lots of expectation from us as managers, as people who lead other people,” said moderator Dmitry Shishkin, Chief Content Officer of the UK-based Culture Trip. “Lots of confusion, lots of unknowns, not only on the professional level, because we do not need to only report what’s happening, but we have to be looking after the people who we are leading, and who we are helping.”

Joining Shishkin were Robyn Tomlin, Executive Editor, The News & Observer and the Durham Herald-Sun, USA, and Brian Rhoads, Managing Editor, South China Morning Post, Hong Kong. (Due to technical problems, the webinar itself was cut short and participants were unable to hear from WEF President Warren Fernandez, who is the Editor in Chief of The Straits Times, Singapore, who was also on the programme, and with whom we are doing a separate interview).

“Because we didn’t have a lot of time, it was bumpy the first few days,” said Tomlin, who manages 11 newsrooms in four different south-eastern states. (See a video link here or at the end of this post to replay her comments).

“We had a lot of staffers who had laptops and WiFi, but they might not have had all the applications that they needed for IT. They didn’t know how to use hang-outs, they were confused by some of the communications that were coming out, and quite frankly, they were dealing with a lot of their own personal circumstances as schools started to close down and they had kids at home.”

She added that they have been working hard to try to address both the structural and communication needs within their newsrooms.

“We’re doing twice daily email communications with each newsroom about what’s going on. We have twice daily Hangouts: we’re using Google Hangouts for our news meetings, and we’re asking everybody to attend, not just editors,” – Robyn Tomlin

They also have all their editors stay on a background Hangout where everyone is muted, “but whenever there is something happening, we can just unmute and have a conversation as if we’re sitting next to each other,” she said. “There are plenty of other technologies where you can do that. And we use Slack intensively. Slack is our constant communication, and all of those things have really helped.”

She also noted that they have tried to be clear with schedules and what they expect from people in terms of their schedules that they are working.

“We’ve been very clear about the safety precautions that we need them to take. Those that are able to go out, some are, some aren’t right now.

“We have a number of people who are in quarantine right now,” she added, including one staffer who was at a conference that had a participant who tested positive for the virus.

The woman from Tomlin’s team “has not been able to get tested because testing is such a huge issue in the US, but she’s sick, and we believe that she probably has the coronavirus. So it’s been a constant cycle of trying to check in with people tand make sure they are doing ok – physically, mentally – and we’re just communicating like crazy.”

Most of the 11 newsrooms Tomlin manages are very small, ranging from 10 to 50 people, she said, so communication is especially important.

“We have gone to staggered schedules so that we’re covering more hours in the day, and so we are really working together and using editors from more than one newsroom to cover late night or early morning shifts to make sure that people are getting enough sleep because that was a problem in the first week or two.”

She also pointed out a few things that they’ve done that she thinks have been very successful.

“We started a twice daily newsletter where we are rounding up the key insights that we believe our readers need to know, and we’re obviously doing all the news alerts, and the app alerts and the email alerts as new developments happen. But we’re hearing from readers that all of those constant alerts are stressing them out,” – Robyn Tomlin

With that in mind, she said one of the things they’re now trying to do is help people to de-stress a little by providing “a round-up twice a day of what you need to know that’s focusses on the urgency and the breaking news that’s happening in each of these communities, but also intensely on the utility, the things we really want people to focus on about how they can protect themselves, and what they need to know about.”

In Asia, the South China Morning Post’s Managing Editor Brian Rhoads said they been reporting on the virus since the early stages of the outbreak and began to take steps to begin having staff work from home since January.

“We’re on China’s doorstep,” he said. “The first inkling of this came when we were reporting on a mystery outbreak in the early part of January. And some of us had covered SARS, I was in Beijing during SARS back in 2003, and we knew well enough to advise our reporters not to go into hospitals, not to get close to medical health professionals, not to talk to sick people, that sort of thing.”

He added that initially SCMP did some exploratory reporting and they had people go to Wuhan in the early stages, but as soon as the cases started to ramp up, they called all their reporters home.

Rhoads said that most of their staff went straight into working from home around 28 January, just after Chinese New Year.

“I remember sending out a note to the staff telling the staff to take their laptops home, to test out the VPNs, and get ready to work at home for the near future,” – Brian Rhoads

At first, SCMP limited to central staff because of their print publication, and some staff use large monitors for page-layout that’s more of a hassle at home.

Meanwhile, they started drawing up plans for everyone “to test their VPN to make sure it was ready so they could go home at a moment’s notice.”

“Thank goodness we did have a business continuity plan in place since early February that we were ready to implement, and we followed it like a blueprint, and we put out an entire print publication last night without a single person in the office, so we’re kind of excited about that.