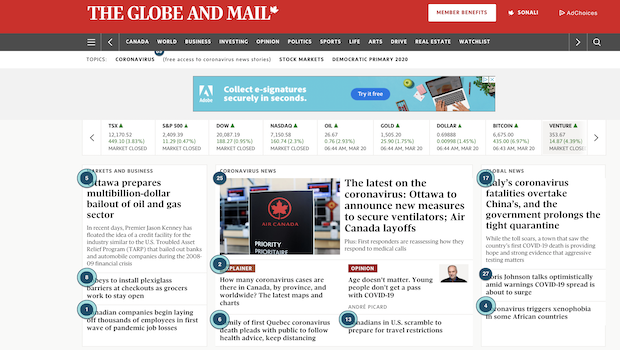 For about a year now, The Globe and Mail in Canada has had an artificial intelligence system called Sophi autonomously running practically all of its digital properties, including the homepage and key landing pages.

Every 10 minutes, Sophi looks at all of The Globe and Mail’s content; at every place each story is being promoted; and at all the ways the audience values that content. It finds valuable stories that merit greater promotion and updates every page of the website accordingly.

The result has been a dramatic improvement in the Globe’s business.

The story of Sophi

The Globe and Mail’s data science team has spent the past eight years building Sophi, in close collaboration with the newsroom. The data scientists would ask journalists which questions they needed data to answer, present the answers in an analytics tool called Sophi, and ask if the journalists were satisfied with them. The newsroom would then provide feedback, which would shape the next iteration of Sophi, and so on.

In this way, the journalists have driven the development and design of Sophi, resulting in an easy-to-use tool that they understand well. Every member of the newsroom has access to Sophi data.

How does Sophi decide which articles are important?

Before Sophi, The Globe used all kinds of analytics tools, which showed what the most popular content was. But none of them really answered the question that Sophi answers, which is: What is the most valuable content?

After The Globe and Mail put up a paywall in 2012, it was clear that an article that was behind the paywall and brought in dozens of subscriptions was far more valuable to the organisation than an article that had thousands of pageviews – but there was no way of comparing both articles.

Sophi solves this problem. It understands how much each story contributes to subscriber retention, subscriber acquisition, registration potential as well as advertising dollars.

Every article published is scored according to how much readers value it and, therefore, how much value it brings to the organisation:

The Globe’s data scientists also ensure that “promotion bias” is stripped out of the equation so that articles can be compared fairly:

How much manual work is still done?

Editors manually place the top three stories on the home page and the business page. Sophi handles programming for every other slot and widget across The Globe and Mail’s digital properties.

While editors can manually override Sophi’s choices, this is seldom needed because:

1.    The editors have set the mix of the articles that they want to see on the page (eg, up to four articles on politics, up to two articles on sports, etc.).

2.    They have also trained Sophi to understand which articles are best for which context (eg, what appears on the home page versus the business page) and to avoid unsuitable content:

The Globe and Mail’s Editor in Chief, David Walmsley, believes the newsroom of the future is one where journalists can focus on finding and telling great stories – something that the machine can’t do. This is why he asked the data scientists for automation, slowly and carefully testing the results before gradually implementing it across practically the entire site.

In A/B testing against traditional curation, click-through rates off the home page were up more than 17 percent; this helped lift the subscriber acquisition rate by more than 10 percent.

The Globe is also generating more advertising revenue due to increased inventory availability.   It is worth noting that in the past year, no reader has complained or asked if a computer was behind the site.

The Globe and Mail is also turning print laydown over to Sophi, where it does in a few seconds what two people used to take two hours to do, freeing up valuable newsroom talent to focus on other tasks. Soon, it will also determine what to promote on social media pages and in newsletters.

Because of this experience and its success so far, The Globe and Mail it is now also licensing Sophi to other news organisations.

By Sonali Verma, Senior Product Manager, Analytics, The Globe and