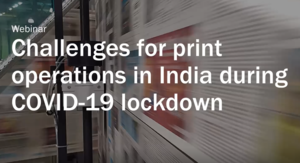 The Times Group is one of the largest media groups in India, publishing leading newspapers such as The Times of India and The Economic Times.

Before the COVID-19 pandemic, the publisher boasted 124 editions per day with some 7 million copies being printed and distributed.

However, things have changed drastically as the virus began spreading to more parts of the country and a total lockdown kicked in.

In India, the virus started spreading about a month after it began spreading through Europe. On 23 March, the Government of India declared a nationwide lockdown sparing only essential services.

While printed newspapers were among the list of the essential services published by the Central government, the reality on the ground proved to be tough for papers.

“Right now we are going through the peak of the crisis, and we have been trying to maintain production and distribution amid the lockdown and the challenges it poses,” said Roy, listing the following major challenges his team has been facing:

“The rumours hurt us a lot. The Indian print publishing industry as a group had to fight against the rumour to convince people that actually newspapers cannot carry coronavirus,” Roy said.

He also noted that the team, during the past six weeks, has learned how to work from home and keep the business running.

Several media organisations in India started adopting precautionary measures weeks before the lockdown was announced. At Times Group, the pre-press staff were quickly moved home and about 90 per cent of them are working from their homes now.

The press staff was divided into A and B teams, which had separate working hours and did not come into direct contact with each other.

Thermal screening was done for all employees and sanitation and fumigation of the press became part of everyday activities.

Self declaration was sought from all the staff whether they had come into contact with anyone with travel history, symptoms of flu or was a carrier. More than 85 people were asked to stay at home and self-quarantine.

The industry came together in the crisis time and worked together to secure government support to print and distribute copies.

Most of the big publishing houses also made an agreement that if one of them faced a problem of a press being locked down due to infection, others would share their resources with them to help them keep going.

India was one of the countries to announce a lockdown very early on. The original 21-day lockdown was later extended for another two weeks and is expected to continue until 3 May.

The strict lockdown measures also meant that more than 2,000 hotspots were identified across the country where newspapers had no entry.

Roy noted that a few such challenges were unique to the country, including:

“The negative campaign against newspapers has particularly affected the Indian newspaper industry. Even today some elderly people are apprehensive of touching newspapers,” Roy said.

According to Roy, several days into the lockdown, people started realising most of what they saw on social media was not true, and they started coming back for newspapers. “Some of the readings show that readership has actually gone up by 50 per cent, that some readers are spending 50 per cent more time with newspapers,” he said.

“Another unique challenge is that some states have banned door to door delivery of newspapers,” he added. “This comes to about 10 per cent of the entire Indian market. This also prompted many distribution boys to stop turning up for work.”

Roy also noted that employees were given laptops and desktops and efforts have been made to ensure good connectivity at their homes. Uploading high-resolution pictures and making pages are high-bandwidth activities which caused hiccups during several instances.

“We tried to keep the desktops in the office on and connect your local desktop to the servers in the office using VPN or some kind of connectivity form so that you are not bandwidth-hungry,” he said.

For the resident staff at the plants, the company arranged guest houses. One room was allocated per person and big areas like conference rooms were converted to bedrooms. Supply of food has been ensured four times a day.

Through special arrangements and a dedicated network of buses, which had permits and curfew passes, transportation of staff is being ensured. With restricting the number of people inside buses to 20, social distancing is being maintained during transportation.

Masks and PPEs are compulsory during travel as well. Once at the gates, employees are screened and let inside.

“When it comes to keeping the spirits of the staff high, our HR has done a fantastic job. Even before the first case of COVID-19 was reported in the country, our HR had the advisory out. We have been communicating regularly with the employees. Communicating with people is the only way to keep them motivated, or else what they would hear would be the fake news and rumours.” – Snehasis Roy, The Times Group.

Roy noted that most publishers are currently resorting to e-papers to ensure readers don’t lose the habit of reading newspapers.

He added that the team had promotional activities in place for post lockdown days, and in fact, circulation numbers were expected to rise in some markets.

A silver lining, he observed, was that the situation imparted enormous amounts of learning and prompted them to look into cost-saving opportunities and optimisation in terms of manpower and workflow processes.

“Something like this happens once in 100 years. We cannot get defeated by it. I believe that we all will emerge from this strong,” he said.

Passing of a newspaper ambassador