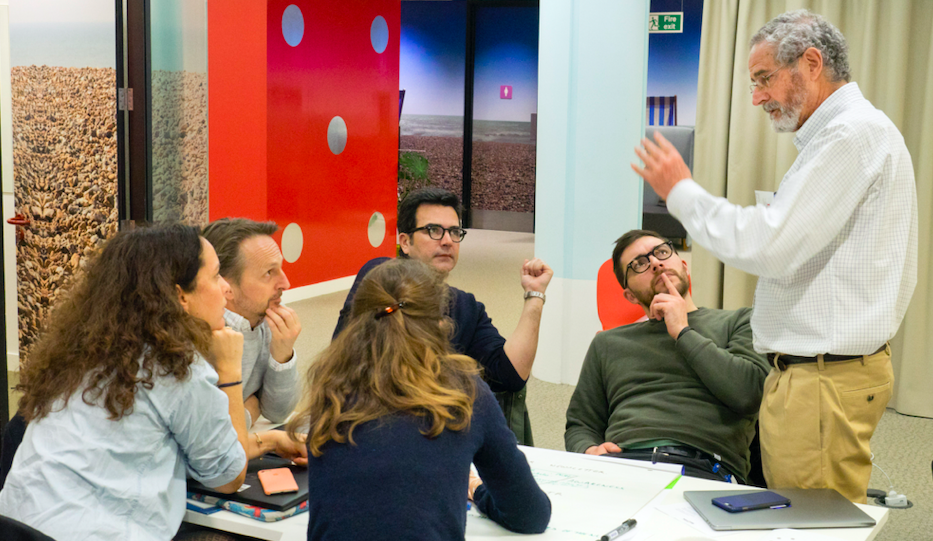 Google’s Academy London space is a short walk from Victoria Station. At the invitation of the Google News Initiative team, this is where the Tables Stakes Europe participants gathered for their third physical meeting. Everyone enjoyed coming together for three days in a relaxed atmosphere just before the alarming news about the spread of COVID-19 reached Europe and the bad news really hit.

For some, that news hit faster than others – Italian participant Edinet’s CEO Matteo Rainisio has not seen his staff in person in the office since before the workshop.

Doug Smith, the architect of the TSE programme, had asked participants to define SMART outcome wins to be achieved between the Lisbon and London meetings (with the design/do approaches needed to achieve them). And as the TSE method is focused on increasing the capabilities/skills within teams, Smith also looked for progress against the 7 table stakes that participants must integrate into the way they operate, as well as the measures taken to free up resources within teams in order to focus more on the digital objectives.

Table Stake #4 was a key theme in London – with a workshop on Funnels and discussions on how to best select and measure relevant KPIs. As one small publisher explained: “Now it has become a daily routine among us to discuss and report on conversions and digital active subscribers. And data has gained much more influence in the newsroom for planning topics and measuring success”

For four teams, working on the topic of interest for a special segment of their audiences led to a set-up that is fairly close to the Table Stake #7 concept of mini-publisher teams: a multi-disciplinary team, including journalists as well as people from marketing, design and IT. Those who set up these structures the earliest (at the beginning of 2020) spoke of “contagious enthusiasm,” where the good results give other colleagues in the company a desire to be part of the positive experience.

The importance of forming an audience team

As noted above, since the start of the program, all the TSE participants have made great progress in taking a different approach to understanding their audiences and how to serve them (e.g, time of day, topics, format…). Of course, with different company sizes and starting points, this is happening at slightly different speeds in each case.

Some have focused on understanding what triggers engagement for their most loyal audience segment and the actions to take in order to convert those “brand lovers” into paid customers. Since the Lisbon meeting, several participants have also identified various audience segments they want to engage, retain and convert to subscription, by creating one or more newsletters to personalise the content offer and the relationship with these potential customers.

Following Smith’s instructions from the beginning of the programme: information on the lifestyles, consumption habits and interests of these segments is as detailed as possible (including input from reader meetings/face to face interviews) so that these targets “come to life” and are thus more meaningful both for the marketing teams and for the journalists who will write for them:

“Audience is audiences and that’s real people, human beings with interests, emotions, behaviours,” Smith reminded everybody in London. “It’s a reason more and more newsrooms are setting up an audience team: able to identify what readers want, when and where and communicate this information to the journalists. These teams are helping shape the subscription funnel or the loyalty ladder, however you want to call it.”

Work in progress: dashboards people will actually use!

What analytics and dashboards should be used to help guide the newsroom and digital teams as they build their subscription funnel? This has been a recurrent discussion in the TSE group since the start of the program in October. Most participants have set up indicators either to monitor how to increase usage, successful content to build loyalty and convert, and explore the effectiveness of the newsletter strategy (“Newsletter readers have the best conversion rate,” says a participant, echoing the findings of others). The more advanced are also monitoring anti-churn strategies (factors in the behaviour of subscribers helping keep them engaged).

There is no lack of data in the digital world. However, everybody in the group agreed on the difficulty to convert it into meaningful goals or KPIs that everyone can understand and use to meet the company’s subscription objectives. Smith says good indicators are those that also lead to proactive measures. 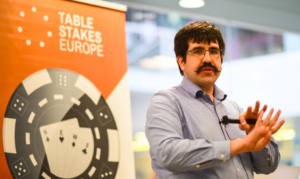 The Seattle Times is a U.S. Tables Stakes alumni and its paper’s assistant managing editor, Danny Gawlowski (pictured above, photo by Dr Wolfram Kiwit), was in London to explain to his European peers Seattle’s journey into building meaningful indicators and how, after many months of testing different metrics combinations, they came up with their own Grail: the “Subscribers influence strategy.”

Like many publishers, they began to establish scores using indicators such as reach (page views, traffic source), quality (time on the page, scroll depth, exit rate), core audience (monitored how engaged each user was), yield (ad revenue, path to subscription), and longevity (did story receive page views over a longer period of time?). They also looked to see if those factors helped them to better understand how their users behaved, the importance of their journalism (versus clickbait stories for example) and how they could explore better editing, choice of topics, etc.

Gawlowski shared that, in Seattle, these metrics – while comprehensive – turned out to be too complex for the news room to embrace; and, therefore, were not leading to the actions needed to accelerate digital subscription growth. Nevertheless, all the work they had done helped provide them with a better understanding of how the path to subscription conversion worked. That in itself became their focus: they used the consumption history for a person starting a subscription; built a dashboard to monitor the influence of each section, story, author. This became something that everybody in the newsroom could understand, and something the teams could act on for better results.

In order to speed up the impact of this influence strategy, they used Table Stake #7 and ramped up mini-publisher teams to include additional coverage areas, focusing on their largest drivers of subs: crime, data, food and drink, baseball, opinion, real estate, and housing, travel and outdoors…. For a year, a new area was launched every 4-6 weeks with the support of senior editors. KPIs were fixed to increase subscription influence for these teams over their previous year’s performance. The steady growth in digital subscription they registered last year shows they are on the right track.

They are now working on setting retention metrics for those newly acquired subscribers, and one thing they have noticed is the subscription influence analysis matches the areas of interest once subscribers are behind the paywall. So that metric holds for the next step (understanding anti-churn factors).

The presentations from Gawlowski reinforced the key takeaway that Smith wanted for this London meeting: “Get and use data and funnel discipline in the newsroom now! Make it simple, according to your goals (Is it to convert? Is it to retain?) and actionable, so that the newsroom will support the effort to drive the audiences through the funnel’s steps.”

There is a “Google toolbox” that can help publishers understand and improve their funnel. Azzurra Damen and Benedicte Autret, who are supporting the group on behalf of GNI, invited their colleague Juan Labourt to give the group a tour of this toolbox called “News Consumer Insights” dashboard and playbook (newsinitiative.withgoogle.com or just type “NCI Google”).

A publisher’s digital teams (all of them, you don’t need to be in Table Stakes for that!) can use this resource to gain a better understanding of their audience data, the segments that are driving value and how to improve the funnel engagement toward more loyalty (and conversion to paid readers).

The dashboard shows metrics and the playbook gives very detailed recommendations based on insights gained from other publishers using those metrics or drawn from Google’s own expertise working with audience data. It’s a tool that’s also designed to benchmark performance against peers who are using the dashboard: “We have 1,000 publishers in the benchmark. To understand where they underscore and are better, you can filter to whom you want to be benchmarked (according to size for example),” Labourt said.

The framework is in place, can you move faster?

In a collective effort, the TSE participants have made great strides to streamline their internal production workflows. One participant summed up the philosophy of these efforts this way: “we have stopped being driven by print schedules or approach and editorial teams are now starting to take full responsibility for audiences and digital output (as opposed to leaving it to ‘someone else’).”

For Smith, all those efforts come to the one essential mission of Table Stakes, which is to buildan “Audiences First Newsroom”: “This is what we have been talking about in our updates in London. All you want is a newsroom focusing on the audiences, not the newspaper, not even on the concept of digital-first. Though, of course, the latter is central to having an audiences-first newsroom organisation. It’s what we have been talking about ever since our first gathering in Paris,” he said before wrapping up, one last time, the list of items on which he asks the group to accelerate its progress by the fourth meeting.

What constitutes the ideal version of a digital playbook:

•     Shift story planning/budgeting (including editorial meetings’ timing and focus) to be in time when the audience shows up: audiences-first, and within that, digital-first, print later-and-better.

•     Shift desks (in whatever order makes the most sense) to a one-team workflow focused on audiences.

•     As part of building up capabilities, make sure to get usable data – and the funnel discipline – in the newsroom now!

It should be said that in the weeks following the London meeting, all 14 teams started an incredible journey covering the coronavirus crisis, often in very difficult conditions (with lockdown, reduced working hours in some cases and very few staff allowed in office). They all adapted with incredible agility, launching news products in record times and recording very good results to reward their efforts.

As often is the case, difficult times also create opportunities and some of the new digital workflows and product focus they were advocating the newsrooms suddenly materialised. Their next challenge is to ensure all those good new practices endure!