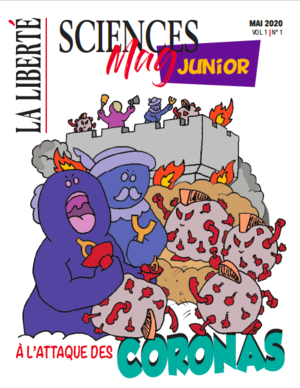 Journalists have a duty to recognise that they don’t have all the facts. To be a journalist is to take a step back, to seek properly informed people, to discover various points of view, and to then cross-reference the data and finally, to make all the information accessible to as many people as possible.

It’s no wonder, then, that a “small” Canadian newspaper has taken on the task of painstakingly gathering information about the coronavirus and then communicate this data in a way that children can clearly understand.  In less than five weeks, the paper’s team fully designed, illustrated, funded and produced a 64-page magazine to explain how the human body fights viruses like SARS-CoV2.

It’s in the nature of small newspapers like La Liberté to offer this kind of content, as they constantly have to reinvent themselves, often with limited means, or else run the risk of disappearing. La Liberté, 107 years old today, would not have survived without this drive to not only continue but also to thrive and excel.

While the start of the health crisis in March heralded the beginning of the end for several Canadian newspapers, Sophie Gaulin, editor-in-chief of the weekly, refused in no uncertain terms to let any such thing happen. To allow the drop in advertising revenues put an end to the paper’s mission to be of real service to the public was simply out of the question.

She therefore decided to recruit Jean-Eric Ghia, a scientific director and professor of immunology, to the project. She also found more than 20 sponsors to deliver this first-ever science magazine for children and teenagers.

Eschewing the daily information race that throngs newsrooms around the world, La Liberté’s teams went knocking on many doors. Those of professors, academics, and of the St. Boniface Hospital Research Centre – all those who could make a contribution to this educational endeavour.

The President and CEO of St. Boniface Hospital, Martine Bouchard, immediately responded to the request of La Liberté’s editor-in-chief.

“I was so pleased that St. Boniface Hospital Research was able to contribute to this first-of-its-kind youth science magazine, using the local expertise of our educators from the Youth BIOlab,” she says.

“A printed paper magazine is a way to reward our subscribers and those of the Winnipeg Free Press,” notes Gaulin. “Because in a world where information is given free of charge on almost all platforms, loyal subscribers must have a greater benefit. Since December 2019, we have been offering high-quality magazines. But this one is a little special, because it is for young people.”

The magazine is also available online for free at la-liberte.ca. But, proof of the readers’ attachment to their paper publication, it was the printed version that found the most resounding success.

“On the first day of publication, we received a lot of calls, emails and messages on social media by people interested in how to subscribe and when the next magazine would appear. In fact, two whole pages of responses from our readers were published in our weekly,” – Sophie Gaulin, editor-in-chief

And the magazine is already slated to travel … “A professor of microbiology at the University of Manitoba asked us for permission to reproduce the magazine and send it to schools in Sierra Leone.”

If the positive response has allowed La Liberté to boost its subscriptions, there are other positives. Among which is that this brand new business model has a philanthropic component.

The newspaper has partnered with the Manitoba Children’s Hospital Foundation of Manitoba to help fund scientific research on the impact of COVID-19 on children. The back cover page has a message from the foundation’s CEO, Stefano Grande, which expresses things quite clearly:

“Children’s Hospital Foundation is proud to support this terrific made-in-Manitoba resource for kids and parents to better understand viruses like COVID-19. As a parent, I want to help my kids better cope in this time of unparalleled uncertainty. So tools and resources like this that will help ease fears and anxiety about topics like keeping themselves, their friends, their grandparents healthy and safe is invaluable.”

“Some of the money raised will cover the costs of creating and publishing the magazine, and the rest will go to scientific research. But if the funds exceed our expectations, the Foundation will then receive a credit to continue to advertise in our newspaper,” – Sophie Gaulin

The result of this virtuous circle of dynamic energy is a magazine containing 64 colourful pages, duly and properly documented, that allows verified information about a disease still unknown to be communicated at a child’s level. And a human adventure that allowed a newspaper to retain its staff in times of health crisis, while participating in the advancement of medical research. An experience that the director of La Liberté would be happy to share with her counterparts, through the many networks of publishers

In these times when good news seems to have almost disappeared, this one does a lot of good, in more ways than one.

La Liberté makes the content of its project available free of charge to any interested publisher. Publishers and WAN-IFRA Members interested in the content of the COVID project for young readers can email Sophie Gaulin at: sgaulin@la-liberte.mb.ca