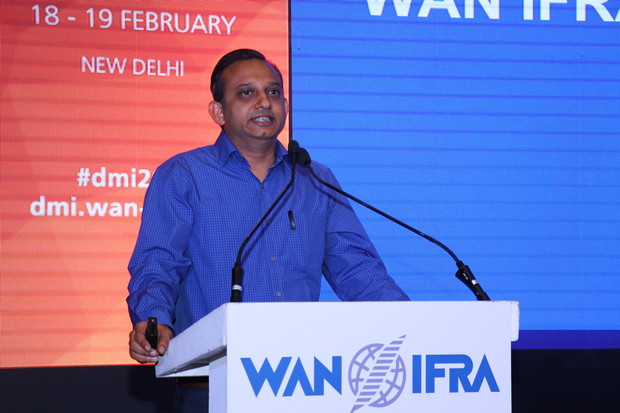 “As per secondary research, many publishers have actually lost revenue and are growing only at single digit. Where is that growth really going? The growth has gone to other platforms. It’s gone to large OTT platforms and large social media players. Money is there on the table, but we are not able to pick it up as news publishers,” he said.

Use the right metrics

According to Gupt, to measure content productivity, publishers should shift their focus from ECPM to a “subscription and time-spent” kind of metrics.

“We created voice, a lot of vernacular content and a lot of videos. But in that process, if our inventory has grown by 100 percent or 200 percent and advertising has grown only by 24 percent, what happens? The net effect is that ECPM rates for all of our businesses have gone down,” he pointed out.

“The deadly effect is that now we have to produce ‘n’ times more inventory to catch up with the falling ECPM rates. It is a negative spiral of sorts. And why did we fall into this trap of producing more content? Because we have this false aspiration of being number one in comscore… The real aspiration should be to become the number one in consumer perception,” he added.

Gupt said that today publishers around the world are focussing more on programmatic ads and talking about directly sold ads has become less fashionable. However, the directly sold ad helps the publisher to understand the needs of the customer. Programmatic ads help to get a fair share of the campaign, but fail to help in building a customer relationship. “So it is very important that you go out in the field and create relationships and focus on how the money is moving,” he said.

Times Internet presently has two products built around the reader revenue model – Times Prime and ET Prime. ET Prime offers exclusive content that is not available to others whereas Times Prime is more like a membership model. A subscription to Times Prime grants readers access to several other services, such as Swiggy Super (a food delivery app in India), Gana plus (a music streaming service), ad-free Times of India and a host of other things. Gupt noted that while considering a reader payment strategy it was important to keep in mind what would work for India and the audiences here.

“In the hurry to produce content for search engines, we were told to learn to do things fast. We started to produce speedy content and headlines, but we forgot to produce great content. Right now is the time to go back to produce content, not for algorithms but for real readers,” he said.

According to Gupt, about 30 million users have made in-app purchases during the past year in India. That’s huge for a country where it was thought that people would never pay for online content. The payment landscape is also well-developed. Gupt noted that last year alone about Rs 10 lakh crores (approximately 11,000 Million Euros) of UPI (Unified Payment Interface) transactions took place in the country. This essentially means that along with the mindset to not pay for content, the bottlenecks for payments have also been cleared. So now the onus is on the publishers to make the best out of this conducive environment.

Every advertiser is now willing to put money behind content. But are we only distributing borrowed content or are we that agency that actually goes out, creates content, figures out the needs and does creative production? Gupt asks.

“Distribution is only one aspect of our offering. The further away you are from ideation, the lesser money you can pick up from the table,” he said adding that it is the game of quality production that news publishers must ace and not that of distribution, which is the forte of platforms. However, while branded content is high revenue, he added that it is also a risky opportunity that should be tread carefully as too much branded content can dilute the editorial voice.

“The editorial departments and the commercial teams have to come together to create this line of revenue. In many senses, the paid content has to be at par with the journalism quality that we are producing. Or else that money will not come to us,” he said.

Platforms have become another unavoidable part of news business. Gupt says that going platform is not a bad strategy, but one has to figure out the right modalities to do it. “Are we creating cost centres for platforms or are we leveraging platforms to drive revenue for us on the content we are already producing? Do not create cost structures that a small algorithm change or a product management decision change at the platform could render useless in a day,” he said.