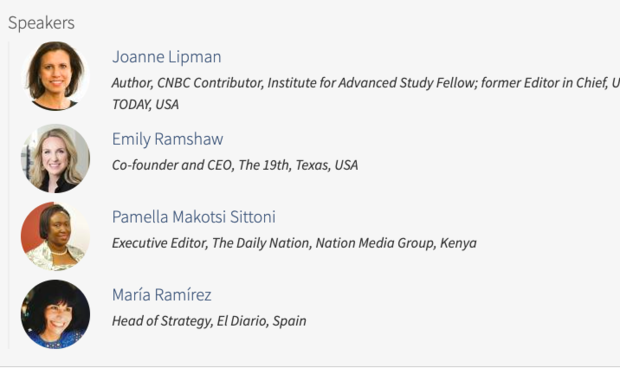 “I think this moment is, I hope, going to prove to everyone that we know best and we can manage our schedules and our lives and still produce extraordinary products without being tethered to a chair in a newsroom,” she told the audience during WAN-IFRA’s recent World Media Leaders eSummit.

Ramshaw was taking part in a panel along with Pamella Sittoni, executive editor and managing editor of the Daily Nation, Kenya, and María Ramírez, head of strategy at El Diario, Spain, at the panel discussion titled “Post pandemic role of women in the Media,” moderated by author and former editor-in-chief of USA Today Joanne Lipman.

Lipman pointed out that women continue to be underrepresented in newsrooms globally and in news coverage. Studies have found that in the US, UK and Canada, 75 percent or more of those who are described as experts on the frontpages of newspapers are men.

“In the US, women make up the majority of journalism graduates and yet the minority in newsrooms and a vanishingly small number of our top editors. And globally, a recent study of English language news sites found 77 percent of those mentioned in articles are men. Researchers concluded that women are routinely marginalised and symbolically annihilated in news coverage,” Lipman added.

Bringing in more women into the newsroom and into leadership positions will not only help elevate the status of women but also add diversity to the content being produced. Sittoni explained it further.

“Where you have gender diversity in a newsroom or where you have diversity at the table where you are making such a decision, you are likely to bring in more voices and more diverse content than if you are at a table that is just full of men. When you bring in more voices, more women, you bring stories about other things that matter to women – childcare, health, issues of poverty,” – Pamella Sittoni, The Nation.

El Diario, a digital publisher based in Spain, is one of the partners of BBC’s 50:50 project, which aims to increase representation of women in media content. As part of the project, the experts and sources quoted in stories are counted, recorded in an excel sheet and checked at the end of every month to find out the gender balance. Based on this, active measures are taken to increase the representation of women among them.

“We started with op-eds and now we are moving to the business section, which is usually more unbalanced than other sections. Sometimes you don’t realise how many men you choose. This way articles are better, richer, they have more sources. For us, it’s really working well,” Ramírez said.

Sittoni said she would like to try it in her newsroom, and added that beyond counting the people interviewed, media organisations could come up with policies that address the imbalance in newsrooms. At The Nation, deliberate efforts have been made to ensure that whenever there are promotions at least a third of those being promoted have to be women.

“Last time when we had a major reshuffle, we ensured that we got a third of the women promoted into editors and such roles. I’m hoping we get to fifty-fifty. I think it has to be very deliberate, and it has to start with the leadership of the organisation,” she said.

Sittoni noted that post-COVID there is no excuse for women not wanting to remain journalists. It is now well established that flexi times and home offices are feasible, and therefore, there should be more incentive for women to stay in newsrooms.

“What we have seen here in Africa is that women start off strong at the lower cadres, but as they get older and start having families they drop off and go into PR and communications and government organisations, which promise them lighter schedules and more manageable time for the families. But now we can have the best of both worlds and it should encourage more women to be in the newsroom,” she said.

However no change happens overnight, and changes in a newsroom are no different. But a good example to look up to is El Diario where half the number of editors are women and of the top two people in power, one is a woman.

El Diario also makes sure that gender balance is reflected in its hiring processes, Ramírez said.

“At least find women candidates. You just have to keep looking because sometimes women don’t apply at the same rates as men do. The 50:50 thing is part of our policy now, and we don’t do interviews unless half the candidates are women.” – María Ramírez, El Diario

Ramshaw added that applying peer pressure to other organisations to encourage them to do the right thing when it comes to representative newsrooms might also be a good option.

Sittoni noted that there has been a lot of growth for women journalists in Africa recently, particularly among those who are coming out of programmes where they have been mentored and developed management skills.

Before the pandemic, it was not uncommon for women’s voices to go unheard at meetings, or for them to be interrupted or silenced. Ramírez feels that the COVID situation has helped in addressing it.

“In meetings women are interrupted a lot, that doesn’t happen a lot in virtual meetings. There are less issues of office politics. So let us not waste this crisis and do more to make sure women are at the top,” she said.