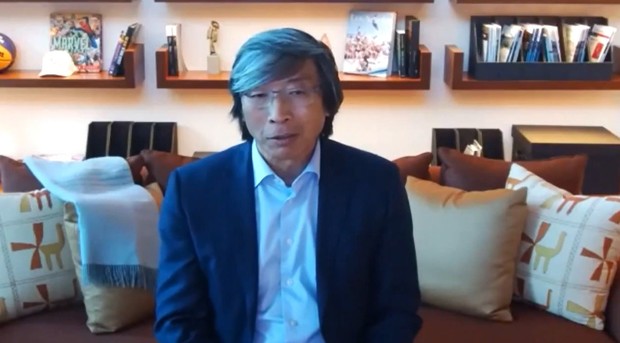 Caption: Dr Patrick Soon-Shiong, Owner and Executive Chairman, Los Angeles Times and The San Diego Union-Tribune opened the Asian Media Leaders eSummit with a keynote titled Quest for a Cure: How do We Fix an Ailing Industry?

The 140-year-old Los Angeles Times is the most-read newspaper on the U.S. West Coast, but its business was already in steep decline by 2018 when biotech entrepreneur Dr Patrick Soon-Shiong took over the paper. He immediately moved to improve its technology.

He dropped a new online platform that had seen page views collapse a month after its rollout. The technology team went to work on their own AI-based CMS platform, which they named GrapheneCMS. It uses artificial intelligence to integrate the newsroom and publishing, connecting editorial to printing, the web, mobile and advertising.

At a time when the future of the media is in doubt, Soon-Shiong said local newspapers should ask themselves why they should survive.

His answer: newspapers are a voice of trust which people turn to for information and inspiration. They provide a public service, especially during the COVID-19 pandemic when publishing the truth about health issues can save lives.

“We are in a competition to engage people and have to responsibly engage people with information they can trust. We need to engage especially the seniors and millennials. Throughout history, journalists understand the need to produce truthful reporting,” – Dr Patrick Soon-Shiong, LA Times

Media companies can add value to their products by engaging more with their community and audience. One idea is to give readers access to services and information at the press of a button, such as finding a doctor or checking the results of a test for cancer or the coronavirus.

Soon-Shiong sees the LA Times as a media brand and building businesses that leverage that brand is the key to surviving and thriving.

He pointed to the successful true crime podcast “Dirty John” launched by the LA Times in 2017 and later turned into a TV show on Bravo. The paper is also aiming to draw foodies with its “Test Kitchen” offering.

Asked about the impact of Facebook and Google, Dr Soon-Shiong said they can help drive traffic to a news platform, but they can also take away revenue. He also suggested they should be held to the same publishing standards as traditional media.

“If people see these social media platforms as media players, then they should have the same responsibility to the community by propagating truthful news,” he said.

About the Author: Lee Kah Whye is Director at Project Mercury, a media business consultancy. Before this, he spent nearly 20 years at Reuters and was head of the news agency business for Asia.