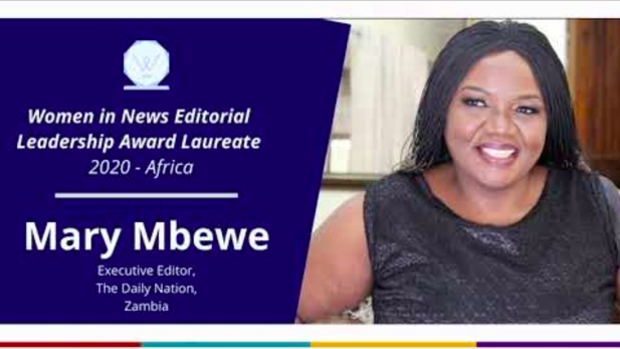 Becoming a woman leader within Zambia’s media landscape can seem daunting. Managing work-life balance, pushing past self-doubt and creating a strong work ethic are what it takes to break the glass ceiling in a country where few women can be found in senior management positions.

But Mary Mbewe, the current Executive Editor at Zambia’s Daily Nation, has shown young women journalists that it is possible to do exactly those things. In the 1990s, she became the first woman at the Zambia Daily Mail – and in Zambia as a whole – to achieve the role of Editor-in-Chief.

And in winning this year’s WAN-IFRA Women in News (WIN) Editorial Leadership Award for Africa, Mbewe has become an inspiration for other young women hoping to move into the upper echelons of the media.

“To be named an award winner is great for my country and for all the people who have inspired me to work hard and be nice to people… it’s a great honour,” says Mbewe. “I hope I can inspire other women to focus on their work, to not lose energy complaining.”

Mbewe moved up the ranks of Zambia’s often challenging media landscape by putting her nose to the grindstone and not letting complaints bother her. As a woman in such a high-level position, Mbewe often faced scepticism about how well she could do her job.

“Some men and even some young women were uncomfortable about having to report to a woman,” says Mbewe. “It was tough, but I didn’t let it get to me. I just ignored them.”

Mbewe looked to her managing editor, Godrey Malama, who supported her in her journey and offered advice about how to handle critique. But, Mbewe says that oftentimes the only way to get ahead in the media is by believing in oneself.

“You can’t expect someone to move you up if you’re limiting yourself,” says Mbewe. “Don’t give too many excuses. It’s important to strike a balance between home and work life but no one will give you a promotion if they don’t see you making sacrifices and dedicating yourself.”

There are currently four women in senior management positions at the Zambia Daily Nation, making the paper a primarily female-led team. Patricia Chibiliti, the Executive Director of Zambia’s Daily Nation, says working with so many women has only made the paper stronger – especially with Mbewe at the helm.

“We have found ourselves getting better and better with her input,” says Chibiliti. “She is very hard-working. She’s really been invaluable to us.”

But the gender parity at the Zambia Daily Nation doesn’t necessarily represent the media landscape in the rest of the country. Even if Zambia’s labour laws imply fair wages for men and women, a study of six large newsrooms by the International Women’s Media Foundation in 2011 showed that men outnumbered women two to one in Zambia. Women represented only around one-fourth of senior management personnel.

That’s why it’s been so important, says Mbewe, to have the support of WIN, with its wide network and resources like the 2018 WIN Sexual Harassment Handbook.

“My reporters have learned how to operate in a newsroom, how to stand up for themselves, to follow through on stories and deal with certain issues,” says Mbewe. “WIN gave us that opportunity.”

As Mbewe accepts the WIN Editorial Leadership Award for Africa in 2020, she says she will always be thankful, and hopes other young women journalists will soon follow in her footsteps, even as journalists everywhere confront the uncertainty that the Covid-19 pandemic is creating for the media industry.

“This award is dedicated to all the hard-working women in this country,” says Mbewe. “For all the young female journalists entering this career, I can tell you that it’s a tough world and there are no favours. But if you respect yourself, the world will respect you.”