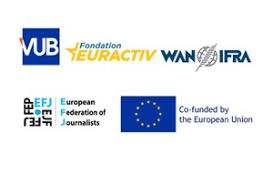 Stars4Media is an exchange and training programme for young news media professionals. The one-year programme supports and coaches more than a hundred talented “rising stars” to develop project-based sustainable innovation and encourage cross-border collaboration between European news organisations. The Stars4Media programme is co-funded by the European Union, coordinated by VUB (Vrije Universiteit Brussel), with the support of Fondation EURACTIV, the European Federation of Journalists, and WAN-IFRA.

During the event, the twenty-one participating teams were awarded a certificate of completion, and five teams were rewarded for the excellence of their work in the following categories: Trust in the news, Cross-border cooperation, Data management, Diversity, and Reacting to the Coronavirus.

In the same meeting, representatives from the news sector, senior news professionals and Members of the European Parliament advocated for the continuation of the underlying “rising stars” programme and called for the strengthening of Creative Europe, the European Commission’s framework programme for support to the culture and audiovisual sectors, including more support provided to the news media transformation.

Prof. Luciano Morganti, from VUB and the  Stars4Media consortium coordinator, said: “We managed to implement this first pilot surprisingly well, despite both the media crisis and the virus. This is to be credited to the flexibility of all partners and chiefly to the resilience and creativity of the 105 participants. Congratulations!”. MEP Ramona Strugariu (RO, Renew & co-chair of the EP media working group) said that “Pilot projects like Stars4Media deserve to become part of a permanent dedicated fund for media.”

The award presentation ceremony was followed by a debate with news professionals and representatives from the news media sector and the European Parliament.

On that occasion, Fernando de Yarza López-Madraz, President of WAN-IFRA declared: “There is an urgent need to support European media organisations by strengthening their capacity and enhancing cooperation across borders. The Stars4Media programme helps focus on young professionals who will lead the next generation of media across the continent. For the moment, EU funding for the media is not visible for medium-sized media companies.”

Christophe Leclercq, chair of Europe’s MediaLab at Fondation EURACTIV presented a recommendation supported by forty-two MEPs to combine news-related projects into a ‘NEWS bundle’, inspired by the audiovisual MEDIA programme. This would include Parliament-triggered pilots, plus the announced 61 Mio € funding for independent journalism and parts of Horizon Europe, the next European Research and Innovation Framework Programme and InvestEU bringing together the European Fund for Strategic Investments and 13 EU existing financial instruments currently available. “We are looking forward to the Commission’s Media Action Plan”, added Leclercq.

The profound crisis in media, accelerated by Covid-19, should be used by journalists and media professionals to better listen to diverse audiences, to test new technical tools and invest in new forms of storytelling. Media pluralism, independent and innovative journalism are the best antidote to disinformation but need the support of public and private stakeholders and of course media-literate users.” added Mogens Bjerregård, Chair of the European Federation of Journalists.

Members of the European Parliament commented on the urgency to support more widely the news sector:

“Quality journalism and trustworthy media play a key role in ‘the whole of society approach’ to effectively fight disinformation. We have an obligation to scale up the support for the media sector significantly”, said Dace Melbarde (ECR, LV). “Creative Europe is one of the 15 flagship EU programmes which are a priority for the European Parliament. In the current negotiations of MFF the EP is fighting for a top-up of the flagship programmes. he Council is proposing 1,6 billion Euro, the European Parliament proposes 2,8 billion and 58%, at least, of this amount should be allocated to the Media Sub-programme” added MEP Margarida Marques (S&D, PT).

ABOUT STARS4MEDIA Stars4Media stimulates media innovation and cross-border collaboration in Europe. A cross-disciplinary programme, Stars4Media will sponsor projects developed by journalists, graphic designers, social media managers, technology or product developers, and marketing experts. One hundred young media professionals with 2 to 10 years of media experience will participate in the programme through ideation, skill-building assistance and concrete product development in four key areas: constructive journalism, data-journalism, artificial intelligence, and language technologies. The project is co-funded by the EU and coordinated by VUB (SMIT-Imec at Vrije Universiteit Brussel), with the support of Fondation EURACTIV, the European Federation of Journalists (EFJ), and WAN-IFRA, the World Association of News Publishers.

ABOUT WAN-IFRA’s GLOBAL ALLIANCE FOR MEDIA INNOVATION. The Global Alliance for Media Innovation (GAMI) leads the Stars4Media Programme at WAN-IFRA. GAMI is the network for innovation within WAN-IFRA. With GAMI, WAN-IFRA provides its members with new ideas and applied research by bringing the outside in, looking beyond what is already known. GAMI supports and coordinates international research and innovation programmes. The Alliance develops platforms for news publishers to better work and to engage with emerging technology entrepreneurs and innovation centres. Its goal is to rapidly advance new technologies and talents to the market and lead to a better economy of scales for news publishers and tech companies in developing and acquiring the next level of innovation tools. www.media-innovation.news.

ABOUT WAN-IFRA WAN-IFRA is the World Association of News Publishers. Based in Paris and Frankfurt, with regional offices in Chennai, Singapore, and Mexico City, its mission is to protect the rights of journalists and publishers around the world to operate independent media. WAN-IFRA provides its members with expertise and services to innovate and prosper in a digital world and perform their crucial role in society. With formal representative status at the United Nations, UNESCO and the Council of Europe, it derives its authority from its global network of leading news publishing companies and technology entrepreneurs, and its legitimacy from its 80 national association members representing 18,000 publications in 120 countries. www.wan-ifra.org