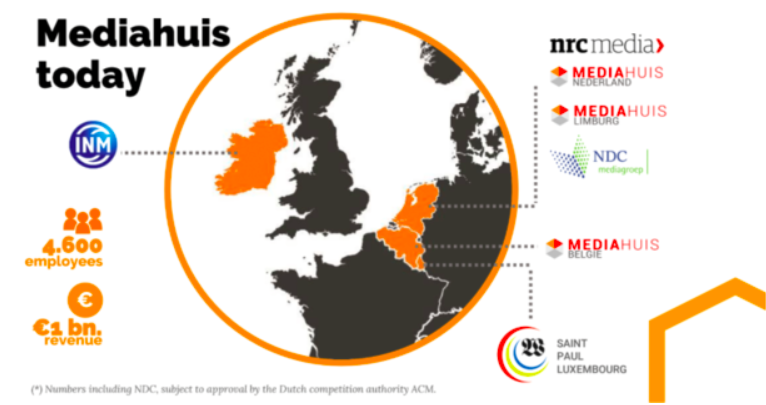 Above: An Antwerp-based group, Mediahuis has grown in the seven years since its founding to become a leading media player in Belgium, the Netherlands, Ireland and Northern Ireland. (Slide: Paul Verwilt)

Investing in the future is key to Mediahuis’ success, says Paul Verwilt, the Chief Operating Officer (COO) of the Antwerp-based group, which has grown in the seven years since its founding to become a leading media player in Belgium, the Netherlands, Ireland and Northern Ireland.

Verwilt shared his insights into the company’s remarkable rise in a keynote moderated by Imelda Alcantara, Head of Operations/COO of the Philippines’ Inquirer Interactive, Inc.

Verwilt is a homegrown talent, having risen through the ranks in Belgian publishing house Concentra before it merged with Corelio to form Mediahuis in 2013.

The success of the merger gave Mediahuis the capital to expand outside of Belgium to a portfolio of more than 30 brands, including legacy newspapers like De Standaard, NRC Handelsblad and the Irish Independent.

The group also runs digital marketplaces in the housing, jobs and automotive market, including propertynews.com and gaaspedal.nl.

You can make any company profitable as part of a bigger group, said Verwilt.

“We’ve seen companies where we would buy them and they would hardly be profitable, and we typically need about two to three years to turn them around. And I think we’ve achieved that every time,” – Paul Verwilt, COO, Mediahuis

Despite the challenges brought about by the COVID-19 pandemic, Mediahuis expects to meet their budget this year, with their revenue growing to a billion euros in 2020 and their operational results growing close to 100 million euros, said Verwilt.

Verwilt shared Mediahuis’ growth strategy, which he split into three tracks: today, tomorrow and the day after tomorrow.

When it comes to optimising their brands today, Verwilt stressed the importance of user experience, saying that the group aims to be best in class in offering a compelling, consumer-centric digital news experience.

“This is not only about customer service. This is really about putting the consumer at the center of everything that you do,” – Paul Verwilt

This has been a big change for Mediahuis, which has shifted from a product-focused mindset to making sure that the product is there for the consumer and not the other way around, he added.

Part of this, said Verwilt, is going mobile-first, thinking about user experience on mobile devices when it comes to products and customer service.

Verwilt also said that he believes the group needs to expand and improve digital offerings, citing The New York Times as an example of a company that has done well in expanding on the type of news and information they offer online.

Print is still important, with the group getting strong numbers of subscriptions when they sell print on the weekend and digital during the week.

“With print, distribution gets more expensive, so that’s a very fine balance we need to get into,” he said.

Direct relationships with customers are key to growing subscriptions, said Verwilt. He said that the tradition of strong print subscriptions in Belgium paved the way for the transition to digital subscriptions.

In Ireland, where there is a greater emphasis on single-copy resellers, the group is looking to build this tradition of subscription.

Outside of the digital experience, Verwilt shared how Belgium’s De Standaard engaged with readers with their CurieuzeNeuzen (Curious Noses) project, where they partnered with the Flemish Environment Society and the University of Antwerp to send out air quality test kits to subscribers to measure air quality on their streets. This citizen science project had  real-world impact and sparked political conversations about pollution in the area.

“Initiatives like this have been important for us, making sure we stand out as a brand more than just covering the news,” – Paul Verwilt

While the brand doesn’t have specific models for attracting younger subscribers, Mediahuis aims to reach them on the platforms where they are, targeting them with free, attractive content.

While he feared a high churn of subscribers after an uptick in subscriptions due to COVID-19, churn has been low, said Verwilt.

He attributes this to the group focusing on putting out content their subscribers are interested in beyond pandemic news.

“To make sure our customers get the right content, we measure a lot, and based on the data, we make decisions,” – Paul Verwilt

After subscriptions, advertising is Mediahuis’ most important revenue driver. Verwilt said that partnerships with local media companies could be the solution to pressures the industry faces from big tech.

“We believe that if local media companies can come together and bring together their reach, based on good data and a lot of good models, we can face big tech companies,” he said.

A key step is also simplifying advertising processes. Verwilt gave the example of the group’s once-complex pricesheets, which have since been simplified with clearer offerings. “That has helped us make it more profitable in the end,” he said.

In the “tomorrow” track, Mediahuis looks to expand their footprint and continue acquiring other news companies over the next few years.

“We feel that scale is very important going forward and that we need additional scale to continue to invest in digital technology, knowledge and data,” – Paul Verwilt

This expansion has helped the group cut costs, allowing Mediahuis to build digital technologies for use across all their publications and reducing expenses for the publications already on board.

Looking beyond tomorrow He added that, due to the pressures faced by the entire media industry, the group aims to invest in new markets for the ‘day after tomorrow’, looking at educational technology and media technology to become more sustainable in the coming decades.

“I think our business is still quite strong. We believe that there is still some consolidation in the industry that will go on for the next few years. I think we will continue to see some strong organic growth both today and tomorrow,” – Paul Verwilt