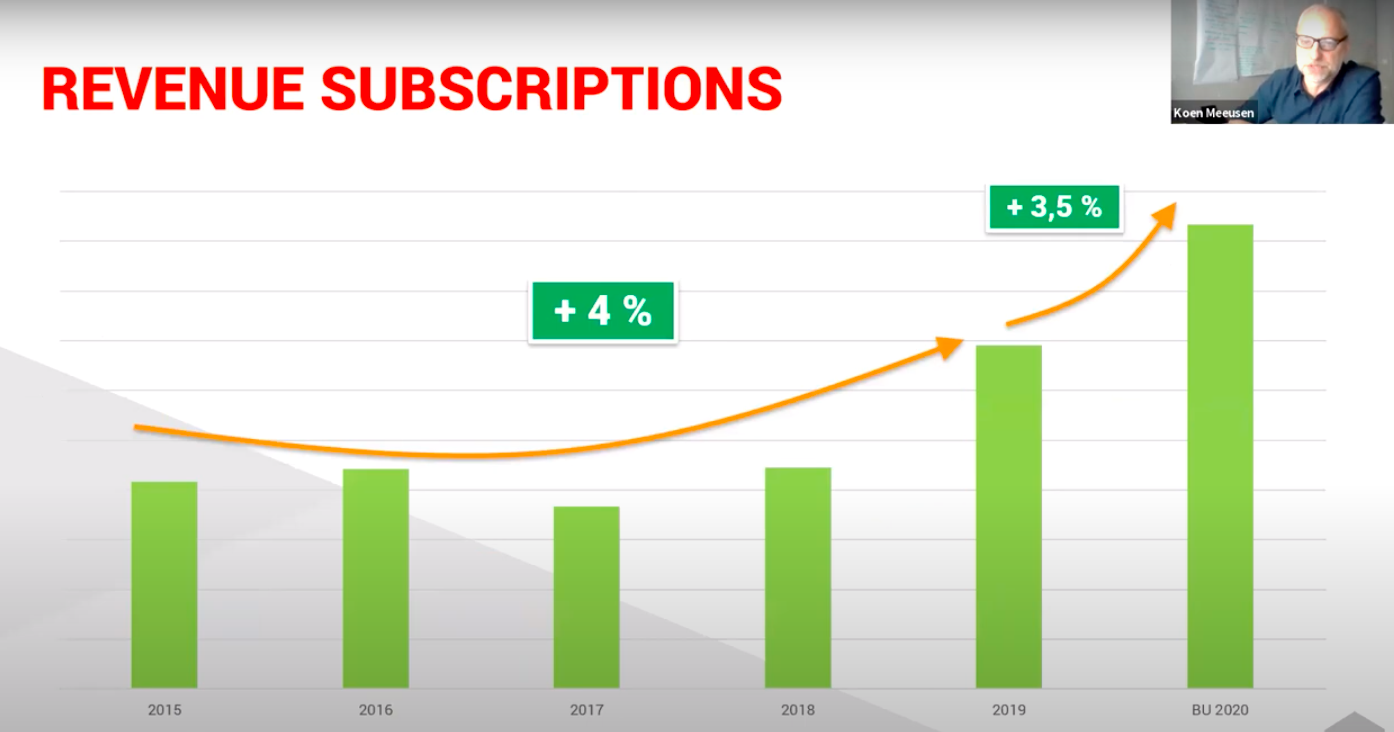 “We were able to compensate the losses we had in print with the uplift that we had in digital. It was not only an uplift in numbers, but also an uplift in revenue,” says Koen Meeusen, Director Reader Revenue, Mediahuis, Belgium

Mediahuis is a Benelux-based company that publishes newspapers in Belgium, Holland, Ireland and Luxembourg. They started in Belgium five years ago, are now international, and have further growth plans.

During WAN-IFRA’s recent Digital Media Europe conference, Meeusen discussed four of their regional papers: De Standaard, Het Nieuwsblad, Gazet van Antwerpen, and Het Belang van Limburg. All are popular regional titles active in the Flemish part of Belgium, that in total reach one out of three Flemish people every day.

In 2020, due to COVID, Mediahuis has already sold more subscriptions than they expected to sell this year.

“We went down with our print subscriptions by 70,000 in the last five years and we grew 85,000 digital subscriptions,” Meeusen said.

“We were able to compensate the losses we had in print with the uplift that we had in digital. It was not only an uplift in numbers, but also an uplift in revenue,” he added.

Revenue from subscriptions increased 4 percent from 2015 to 2019. Meeusen said Mediahuis will probably end up with another 4 percent increase from 2019 to 2020. Due to COVID, the increase was much higher than expected.

He offered five lessons he’s learned in the past five years.

Five years ago, Mediahuis had a slide deck of 500 pages for their plans for 2020. Three years ago, they decided this was too much to communicate, so they scrapped a lot of KPIs and just focussed on one specific KPI, he said.

The goal was 100,000 digital subscribers by the end of 2020. The way they would do this was to focus on making sure the number of new subscribers each month was larger than those who were cancelling.

The company reached 100,000 digital subscribers before the summer of this year.

To mark this achievement, the CEO sent everyone who works at Mediahuis Belgium a small present.

“We learned if you really want to increase your price, you should look for a helping hand, because it’s not a simple job,” Meeusen said.

They got help from Mather Economics, who set them up with a tool for Market Based Pricing based on their historical data, churn numbers, and the prices they had been charging.

The tool shows their different titles and products and what happens to revenue if they were to increase prices by various amounts: How many people will support it, how many will stop subscribing.

Meeusen said the tool is simple, but effective, and helps in making a publisher’s budget as well as help to convince CEOs and people in charge you are setting the right price.

It’s important to go back to the basics, Meeusen said.

“A team is a group of people with complementary skills who work together to achieve a specific goal,” he said.

Each team has a straightforward goal / KPI. For example, the acquisition team must convince prospects with the right offer using the right sales channel at the right price. Their KPI equals conversion rates. The retention team’s goal is to make the relationship frictionless, easy, and convincing for their customers. Their KPI equates to churn rates.

Mediahuis has cut costs by focussing on reducing operational costs.

The data-driven paywall has helped Mediahuis not only to acquire new clients but also to reduce marketing costs.

“I have seen a lot of engagement indexes,” Meeusen said. “I’m convinced that there is one crucial factor and again, it is quite simple: A lack of reading. If you do not use a service, you will not pay for that service. It’s as simple as that.”

-Green readers: People who read a lot of their content

-Red readers: People who read very little or no content

“There is a clear relationship between churn risk and the colour group of the reader,” Meeusen said. “It’s the aim of a lot of people in our company from the newsroom to the marketers to the acquisition team to make sure that we have as many green readers as possible.”